The Drops of God, volume 3
Written by Tadashi Agi
Art by Shu Okimoto
Published by Vertical 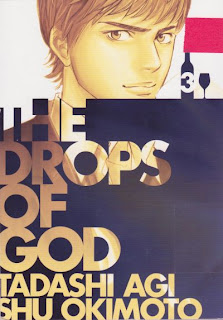 This manga manages to walk a pretty fine line, maintaining an obviously heightened reality while hewing closely to a real-world subject, and going a bit overboard on flowery descriptions of amazing wines, while still managing to convey their appeal and even educate the reader on the seemingly impenetrable aspects of wine culture. It's pretty amazing to watch how well the creators navigate this terrain, but they do it so well that one can simply enjoy the fun story as it plays out.

When it comes to the former aspect, the exaggerated drama and sometimes goofy plots make for some really fun reading, as one never knows what to expect, only that it will involve Shizuku Kanzaki displaying his amazing wine-tasting abilities at some point. For instance, the main plot of this volume sees him searching for a wine his father described, a description that happens to match a painting by a woman who is an amnesiac, the taste of said wine the only thing she can remember. Can Shizuku find the wine that will unlock her lost memories (and use said wine to win the eponymous contest)? It's kind of silly, but some real emotion manages to shine through, with Shizuku insisting that "the past is the earth where a person's present is rooted...a life without roots in the earth can't bear fruit", and using the maturation of wine as it ages as a metaphor for the necessity of memory in people's lives. 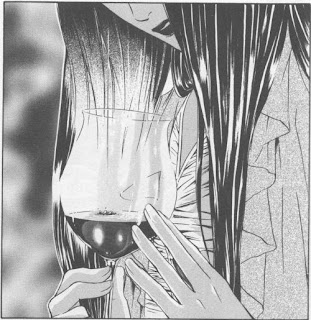 As for the wildly descriptive imagery used to explain what it's like to taste the various wines drunk in the stories, Shizuku can go a bit over the top with how totally and deeply he is transported when sampling a great vintage. One memorable scene has him give the following narration of his experience:


"A virgin forest...it has all the layers of stillness and clarity of Chambolle-Musigny. I see it. The crystal stream...wild roses block my path. The whispering stream is right in front of me, yet I'm barred from its thirst-quenching bounty. Ah, I can't scoop up the water and soothe my throat? Am I not to reach that stream in this wondrous scene laden with wild fruits and flowers? I know. If my hands can't reach, I'll spread the wings of imagination. Tell me bird, how is the stream? Ah, such a happy twitter. Just by watching, I'm filled with euphoria myself. What?! This...am I to drink it? I'm allowed?"

Yes, all that from a single sip. It's kind of ridiculous, but the rapturous experiences Shizuku describes almost always get translated into language that's more understandable and relatable, whether he's explicating the luxurious appeal of the "Big Five" Bordeaux wines or enumerating the differences between vintages of the same vineyard, but especially in a big showdown with his rival where he gets to demonstrate how well he understands his father's philosophy about wine as a union of "Heaven, Earth, and Man", valuing the ability of vintners to overcome flaws and imperfections over the sterility of flawlessness. It's wonderfully expressive writing, and a credit to the translators that the message comes through as well in English as is presumably did in its native Japanese. This is great stuff, and incredibly fun comics. On to the other eleven Apostles, I say. 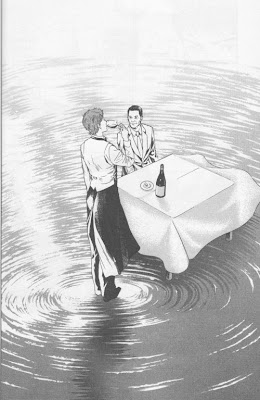