Upon first entering the convention floor at the third annual Chicago Comics and Entertainment Expo, I was feeling a bit depressed about comics, possibly due to the prominence of the uglier side of the industry, the massive booths from DC and Marvel plastered with gigantic banners hawking their tiresome, derivative projects like Before Watchmen and Avengers Vs. X-Men, the prevalence of gross material from publishers like Zenescope, the "comics = superheroes" mentality on display from other-media hangers-on, the emphasis on celebrity guests (John Cusack and Val Kilmer were the big names, but names like Anthony Daniels and Sean Astin were also prominent), and so on. But once I got beyond that first impression, there was tons to be positive about. Smaller publishers really demonstrated their drive to produce good material: Archaia's growing library of quality work like Jim Henson's Tale of Sand, Old City Blues, Miranda Mercury, and other excellent books; Top Shelf's table full of comics to meet all tastes, including new books like Harvey Pekar's Cleveland, Blue, and The Pterodactyl Hunters; and the return of old-school indie publisher First Comics with a combination of reprints of material like Zen: Intergalactic Ninja or Shatter and new comics like Necessary Monsters and Frickin' Butt-Kickin' Zombie Ants. Artist Alley was the highlight of the convention for me, as ever, offering a chance to connect or reconnect with creators whose work I enjoy, and especially to discover new talents from the boundless well of creativity that is modern comics (stay tuned for another post in which I talk about all the new stuff I found). 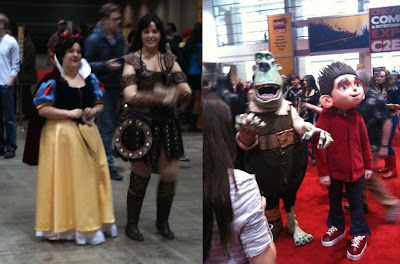 And there's always the experiences that can only be had at a comics convention, from the always-entertaining practice of gawking at costumed weirdos to the various discussions and sights that can be seen at panels. One particular highlight for me was a Joe Kubert panel in which attendees could ask questions about the Kubert School or query him about his methods, while watching him draw a picture to be raffled in support of the Hero Initiative. He's a legend, having been in the comics industry for around 70 years, and getting to watch him methodically construct a picture (of Watchmen's Nite Owl, who he described as "a character my son Andy is working on"), stopping occasionally to discuss art tools, anatomy, reference, inking, and myriad other topics about his art and career. For me, attending the con was worth it for this experience alone. 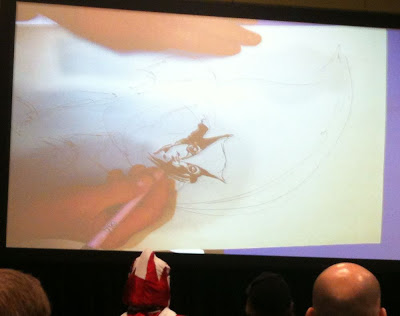 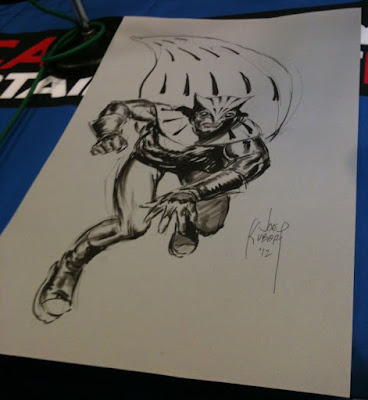 And then on Sunday, I got to experience an entire new perspective on comics conventions by bringing along my family. My wife Sarah, and my daughters Magnolia (age 4) and Dahlia (age 1) seemed a bit overwhelmed by the whole thing, but they had a really great time. The girls were awed by all that they got to see, especially the costumes and big pictures, but for Sarah, the big highlight was meeting David Newell, who played Mr. McFeely, the mailman on Mister Rogers' Neighborhood. They also enjoyed watching the kids' costume contest, which was a parade of incredible cuteness. All in all, it made for a great time, with me able to hang out with people as something of an "insider", and them getting a taste of the experience. It's something we'll have to do again, which is a demonstration that no matter how positive or negative I feel about the comics industry, I'll be able to find things to be excited about, and people to share them with. Luckily, that won't be going away anytime soon.
Posted by Unknown at 6:00 PM