Journalism: Bits and pieces are better than nothing 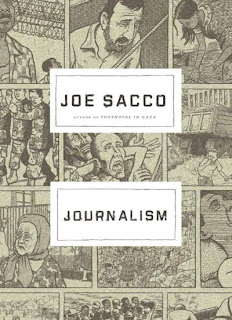 In 2003, I saw the movie City of God, and it had a unique effect on me. Leaving the theater, and for as long as a few days afterward, I felt like I was out of breath, with a tightness in my chest that I assumed was from the intensity of the material, the violence and danger that surrounded the characters' lives in the slums of Rio de Janiero. But now I'm not so sure. While reading Journalism, a collection of Joe Sacco's short comics, a single panel of the story "Chechen War, Chechen Women" induced the same effect in me. A woman who lived through the miniature Holocaust that Stalin inflicted on the Chechen people in 1944 looks back on her hard life and says the following: 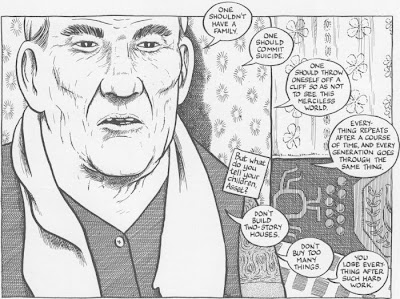 That deep, profound sadness is so alien to me as a resident of the world's wealthiest country that it hit me like a punch in the stomach. It seems impossible to me that someone who lived for sixty years and had a family could wish to exchange it all for an early suicide. The tragedy she lived through is downright incomprehensible to my sheltered sensibilities, and the fact that she is only one among so, so many should bring tears to the eyes of all but the most cold and emotionless of automatons.

Such is the power of Joe Sacco's comics, which peer into the hidden corners of the world and illuminate the suffering of so many that are otherwise invisible to those of us in the rich, walled-off first world. While Sacco's longer works, like the recent Footnotes in Gaza, focus on one area at a time, this collection skips through several different troubled areas, including the aforementioned Chechnya, Palestine, and the Kushinagar region of India (which is home to some of the world's poorest people); examining the war in Iraq from the perspective of United States troops, Iraqi troops in training, and victims of (probably illegal) detention by the U.S.; glimpsing the International Criminal Tribunal at The Hague as it attempts to make sense of the atrocities committed in the former Yugoslavia; and looking at the issues faced by the small Mediterranean island nation of Malta (and by extension, the rest of Europe) as it is swamped with refugees fleeing from war-torn Africa. It's a wide-ranging gathering of short glimpses at some of the worst things going on around the world, and while the length of the stories are only enough to provide a taste of the issues at play, Sacco provides enough background information in each case that one feels at least a small amount of understanding, as well as some empathy for the victims, who Sacco never fails to place front and center, their emotions communicated heartbreakingly and their stories related in detail, all the facts laid out for everyone to see and become outraged by. It might be a troubling service that Sacco provides, but it's a necessary one, a jolt to the system that reminds us that the world is larger than our small lives, and that our troubles seem miniscule next to those of so many who are just struggling to survive.
Posted by Unknown at 10:34 PM