The Neverending Fray: Groo does not know the sound of one hand clapping 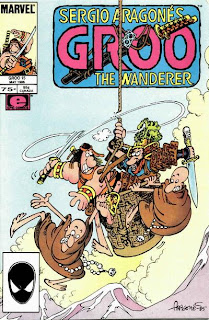 This issue is pretty hilarious, a classic example of putting Groo in a situation where he will drive people crazy and watching what happens. He begins the issue by joining on ongoing fray, but uncharacteristically, he can't decide which side to fight for (normally he would just charge in and attack everyone at once). He eventually chooses one side just in time for them to triumph, but the victors are somber rather than celebratory, since it turns out they have just killed their master, who had turned evil, and now they are all going to commit suicide. The only alternative is to go live in a monastery, and that is a fate worse than death, since they would have to take vows of celibacy and silence. This makes for a weird combination of samurai ethics, emphasized by the armor the soldiers wear, and what seems like Buddhist asceticism, but hey, it's fantasy. Sergio somehow turns a scene of mass suicide into an example of slapstick comedy: 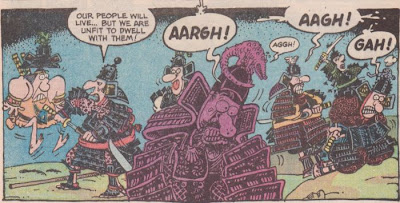 And he gets some great humor out of Groo's difficulty deciding whether to go along with their example or go join the monastery (he's too dumb to think of any other options): 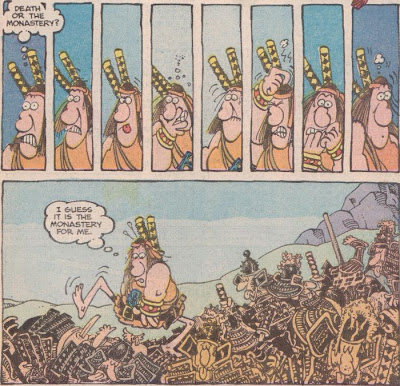 And that's where the real comedy begins, as Groo immediately clashes with monks who refuse to break their vows of silence (leading to an excellent sound effect): 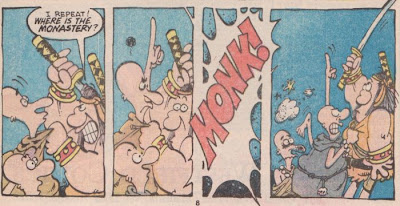 Then he joins the monastery, has his head shaved (which makes for a weird visual), gets constantly shushed when he doesn't understand that he is also supposed to be silent: 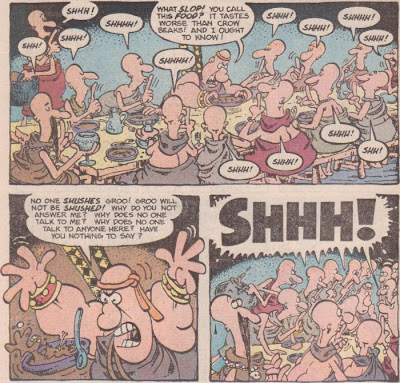 He ends up annoying everyone so much with his constant chatter that they keep breaking their own vows to yell at him, so they send him off to do some begging, only to have him completely ruin their entire way of life by convincing the local townspeople to send them wine, women, good food, and all the pleasures that they have purposely abstained from for so long. It's a pretty great demonstration of Groo's total cluelessness, his inability to understand something that is outside his realm of experience, but also his guileless nature and willingness to help out, even if it's in exactly the wrong manner. Groo usually screws things up, but he has nearly endless ways of doing so, and this is an excellent example of how his combination of good intentions and stupidity can lead to disaster.

On the subject of art, Sergio's flair for detail is evident in this issue, with the little dinosaurs decorating the army's helmets being a definite highlight. His design of the monastery is wonderful, with the way the buildings are perched on a sheer mountaintop, and I like the layout of the page revealing it as well, with the panels set into the main image without seeming to interrupt it: 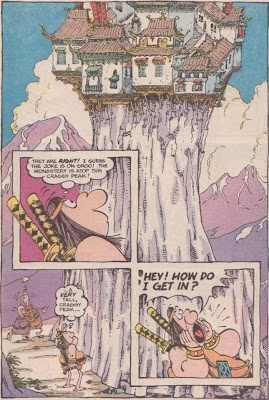 As funny and entertaining as the series is, the consistently lovely visuals are what turn it into a fully-realized world that's worth revisiting again and again. I don't think I'll ever get tired of reading these comics.


This issue's stats:
Recurring characters: The Minstrel, who gets his own backup story in which he wanders through the land singing about how music can overcome hate and spread love, but everyone who hears it ends up getting in fights with each other. Irony!

Hidden message(s): This sure looks like one, but I have no idea what it says: 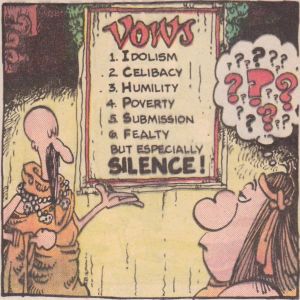 UPDATE: That wasn't it, and the real one (as revealed in issue #27) is ridiculous. Scouring the legal indicia on the first page reveals this sentence hidden among the small text:

Moral: "In the contest between simplicity and silence, silence hasn't got a prayer."
Spanish words: None
Running jokes: Groo gets called a mendicant, but this time it's accurate, since he is begging for money.
Mark Evanier's job(s): Conditioner
Letter column jokes: There are some good ones in this issue. One writer asks why the fret of the Minstrel's lute keeps changing, then details every transformation it made in the character's appearances to date. Mark responds by offering a few explanations, including that Sergio has a short memory and keeps forgetting what he drew. He also confirms that one of the lute-toppers in issue #11 was MAD publisher William B. Gaines, which I was curious about. Another writer complains (possibly facetiously?) that Groo is stupid, unlike "serious and mature" comics with "intelligent stories and characters (such as the X-Men)." Mark responds by defining mulch. Finally, somebody asks why Groo looks "surprisingly similar to Arnold Schwarzenegger when he played Conan", and Mark suggests that if he ever meets Arnold, he should "show him an issue of Groo and say 'I think this looks like you.' But let us know first. We want to see this." The same writer also asks what the blue thing on Groo's chest is, referencing the already-established running joke in which Mark said it was a Walkman. Mark replies by saying that of course it isn't a Walkman, it's a rented videocassette that Groo keeps meaning to return.
Posted by Unknown at 6:00 PM