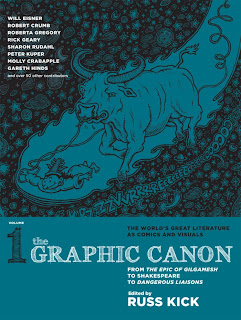 I'm currently working my way through the first volume of The Graphic Canon, an anthology edited by Russ Kick and published by Seven Stories Press which seeks to compile comics adaptations of the entirety of the great works of world literature. It's a pretty overblown goal, but the results are awesome, consisting of excerpts from longer works (including Action Philosophers, the Trickster anthology, Seymour Chwast's versions of The Divine Comedy and The Canterbury Tales, and Will Eisner's take on Don Quixote) and original works by the likes of Rick Geary, Rebecca Dart, Matt Wiegle, Edie Fake, and Molly Crabapple. The result is a thick brick of a book, too extensive to cover all at once, so I'm going to take it a few entries at a time, singling out the ones that I especially liked or found noteworthy. It should make for an interesting journey through some sort of representation of history...

The Epic of Gilgamesh
By Kevin Dixon

This excerpt from Kevin Dixon's ongoing adaptation (available for purchase on lulu.com or iBooks) of the world's oldest epic (taken from a translation/rendition by his father, English professor Kent H. Dixon) is pretty entertaining, depicting the larger-than-life events in a lively, cartoony style. The artwork is somewhat reminiscent of Robert Crumb in its thick, rounded lines and cross-hatched textures, with bonus exuberance, the pages pages filled with grubby detail and slapstick goofiness that livens up the fairly rudimentary text. This portion of the story involves heroic king Gilgamesh rejecting the advances of the goddess Ishtar, who responds by sending a heavenly bull to devastate his kingdom. Dixon draws the hell out of these events, with the scene of the bull zooming down from the heavens being stunning enough to be used on the book's cover, and he exaggerates moments like hundreds of men falling into a pit made by the bull or this gross-out attack on Gilgamesh's buddy Enkidu: 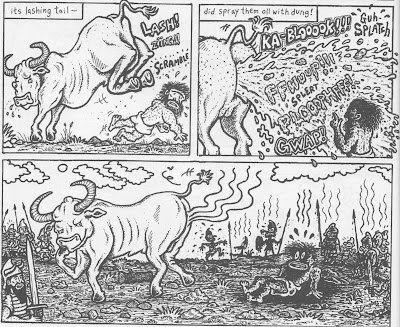 It's a crazy comic, full of googly-eyed background characters and plenty of dirt, muck, and blood, ending up (in this portion of the story) as a sort of ancient-history action-comedy. The rest of this story is definitely something to seek out and enjoy.
-----

Bonus: Dixon appears to be a Groo fan, unless this happens to be a randomly-chosen sound effect: 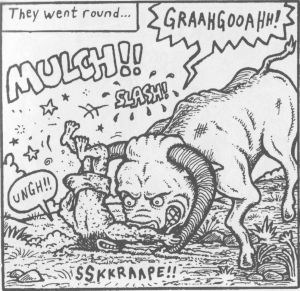 This adaptation of Aristophanes' play, in which the titular woman tries to stop a war between Athens and Sparta by convincing women all over Greece to withhold sex from their husbands until they make peace, is very theatrical, working from Valerie Schrag's own translation of the original Greek text and consisting entirely of scenes of dialogue between characters. That's no complaint though; Schrag gives her characters such life and emotion that the short length of the adaptation makes one wish for more. In fact, that compression (which was probably necessary, this being one of the stories created especially for this anthology, rather than an excerpt of a longer work) is probably the chief complaint here, with the entire plot seeming to play out over a couple days at most. But that's a minor issue, and the gist of the play is communicated very well, making for a ribald, funny comedy. In fact, "ribald" doesn't communicate the naughtiness of the play; it zooms past "bawdy" and "raunchy" into "downright dirty" territory as soon as Lysistrata declares, "We must abstain from dick." Soon their breasts are escaping their already clingy, revealing clothing in order to tease the men, whose massive erections are visible lifting up their tunics until escaping as well, making the force of the raging hormones that Lysistrata is trying to harness evident for all to see. But it's not all explicit; plenty of nice wordplay is brought to bear as well: 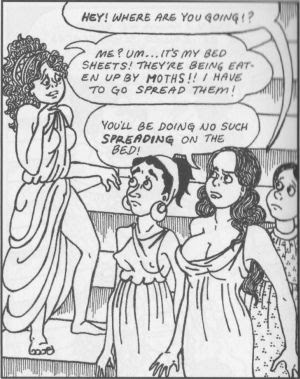 And the discussions of men and women's different approaches to resolving their differences is fascinating, seeming ahead of its time by several millenia. It's a lovely adaptation, full of wonderful body language that's perfect for theater, and it makes me want to see more work in a similar vein by Schrag. Luckily, there are plenty of examples of classic drama to choose from.
Posted by Unknown at 10:08 PM