The Neverending Fray: If wishes were fishes... 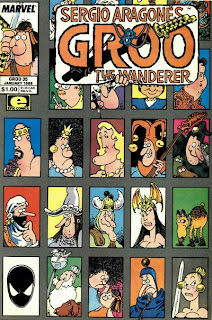 This issue continues the trend of learning to work with supporting characters, increasing the scale to include just about every familiar face from the series to date. And this time around, Groo is the center of the action rather than a player on the sidelines, having acquired the ultra-powerful magic medallion from last issue and managing to inadvertently disrupt the lives of everyone he knows. It does end up being pretty repetitive, as he wishes various characters were nearby, then that they would leave, causing them to abruptly appear and disappear in various locations, usually with dire consequences. The most effective of these is probably the Sage, who keeps getting banished by Groo to a snowy mountaintop, then returning nearly frozen stiff (the ice cubes in the flask on his staff are a nice touch), only to be sent back once again: 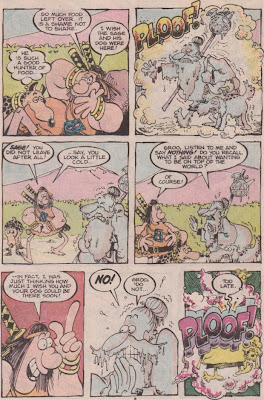 The entire issue is spent on variations on that gag, and they're not funny enough to really stand out from each other; if anything the other wish-based jokes are funnier, like when Groo wants something to eat: 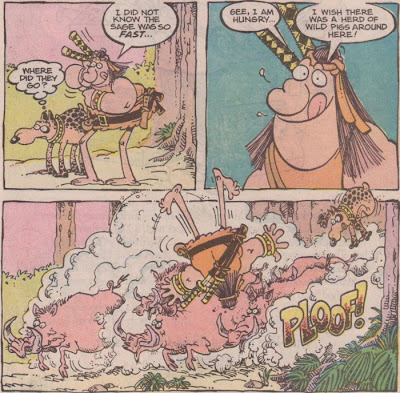 Or when he finally manages to figure out what is going on: 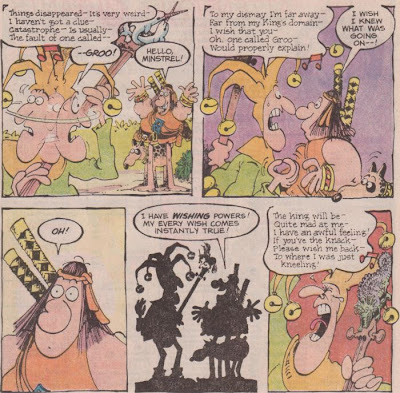 It's also a shame that more isn't done with the situation left at the end of the last issue, in which the Sage was in control of the medallion. The Sage is a really interesting character, a counterpoint to Groo in that he also wanders and tries to help people, but does so by dispensing wisdom rather than attacking people. But he's far from infallible, and he's sometimes selfish or scheming, a departure the humble, selfless monk type that would usually fill this sort of role. So having him gain the power to put his wisdom into effect is a good opportunity to see whether that power will corrupt or his wisdom will prevail for the greater good. The issue initially starts off in this direction, as Sage imagines using the power of the medallion to become not just a rich king, but the ruler of the entire world. But before we can see any of this play out, Groo gets his hands on the medallion, and things go in a completely different direction. Maybe we'll finally get to see the results of a world shaped in Sage's image in some future issue, but not this time.

The medallion saga doesn't appear to be over though (the Groo Crew seems to tend to group stories like this in threes), as the next issue promises more silliness involving magic and the assembled supporting cast. We'll see if Sergio and company can manage to wrangle them into a more effective use of the series' strengths. I'm ever hopeful.

Next: Unfortunately, I don't have the next couple issues, so we're skipping ahead to issue #38, "Mealtime". "Rhyme Nor Reason"
-----

This issue's stats:
Recurring characters: Pretty much everyone: the Sage, Taranto, Arba and Dakarba, Grativo, the Minstrel, Arcadio, Pal and Drumm, and Grooella, although several of them only show up in a few crowded panels at the end. Lil' Groo and Grooella, the Witch of Kaan, and Chakaal appear on the cover, but not  inside. And the Groo Crew (Sergio, Mark, Stan Sakai, and Tom Luth) not only squeeze onto the cover behind the logo, but they show up in the group at the end too:

Hidden message(s): After scouring the pages, I found it written in the curls of Grooella's hair: 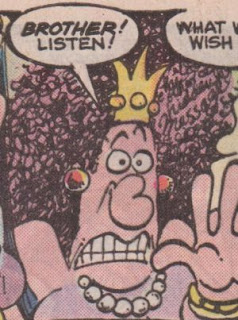 Moral: "A wish is only as good as the wisher and what he can achieve."
Spanish words: None
Running jokes: "Did I err?", a massive amount of cheese dip, and someone calls Groo "slow of mind", but he doesn't respond; maybe next issue?
Mark Evanier's job(s): Opisthographer
Letter column jokes: This month's letter column is composed completely of poems sent by Steven W. Ebner; here's a sample:


I'm back again. I'm getting eager--
Though my poetry is meager--
I will like Groo even better--
If Evanier will print my letter.

And since the poems showed no sign of stopping, Mark promises a conclusion to the Steven W. Ebner saga next issue, "featuring, by popular demand, the very last Steven W. Ebner poem you will ever see in Groo!"
Miscellaneous: This M&M's ad is horrifying: 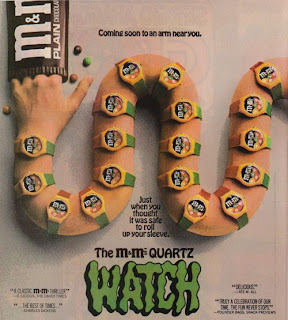