The Neverending Fray: The bond between man and canine is magical 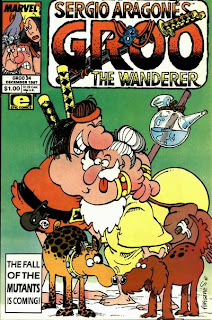 This issue seems to be something of an experiment in continuity, paying off a running subplot from the last time the witches Arba and Dakarba appeared. It's somewhat successful, although heavy plotting tends to weigh the stories down and limit the chances for Groo to run wild and cause trouble. There's also an attempt to incorporate a running joke from the letter column into the comic itself, which also comes off as somewhat awkward, but it's a decent gag for long-time fans. Obviously, concerns about continuity and accessibility have been around much longer than the modern age of comics.

Luckily, the issue is mostly pretty funny, and it gives Sergio a chance to flex his chops at drawing crazy, detail-packed images. The story picks up from where issue #26 left off, with Arba and Dakarba being summoned by the Great Wizard to retrieve the other half of the amulet they were supposed to fetch for him and subsequently lost (the short version of the story is that Groo screwed everything up). They go look for Groo so he can tell them where to find it, but they manage to rope the Sage in as well, and everyone gathers to watch the Great Wizard turn Groo into a fish so he can search for the amulet in the lake where he threw it. After retrieving the amulet, the Wizard becomes super-powerful, but Sage turns the tables on him and sets up the next issue, which appears to feature pretty much every recurring character in the series to this point.

The problem with this story, and many of the stories which feature multiple guest stars, is that Groo is mostly sidelined, only included in the plot as a subservient assistant to the others. He doesn't even really influence the outcome of the story; he's a supporting character in his own book. Sure, he gets to do some funny stuff and fight some guards, but there's not much for him to do. That's the problem with trying to play out long-term plots; eventually those undercurrents overwhelm the main story and undercut what makes it work so well. I want to see Groo try to help people out (with unfortunate results), get in fights, accidentally destroy things, impulsively charge into situations without thinking, and inadvertently foil anybody who tries to use him to their advantage, but he barely gets to do any of that here. There's a simplicity to Groo that gets lost when other players and plots are piled on top of him. I think Sergio and Mark eventually figured out the right balance and came up with some good stories featuring a bunch of characters, but they seem to still be learning how to handle it here.

But, as always, there is plenty to enjoy, such as Groo getting turned into a fish: 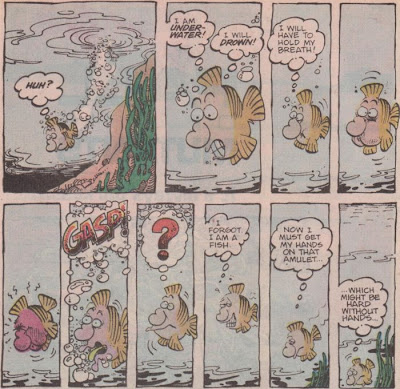 Or finding undreamt-of ways to screw up chopping down a tree: 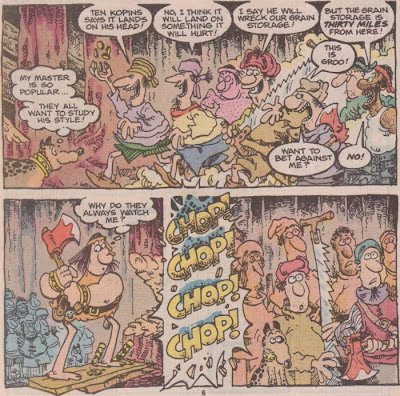 And Sergio fills pages with excellent details, including glimpses of a war raging between the Great Wizard's army of lizard-men and what appear to be masked pig-men riding on dragons: 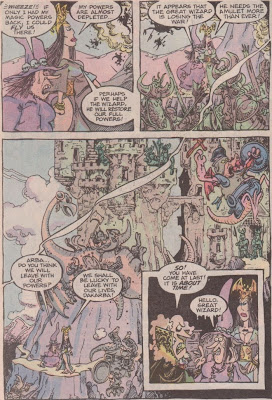 I always love the near-pathological level of detail that can be seen in the margins of Sergio's panels, and this one is especially nice, since it's all flavor, just something happening in the background of the main plot. And Sergio makes it visually interesting, using larger panels to sell the scale of the battle, then switching to tiny silhouettes to act as visual "noise" elsewhere. I would have been happier to just see Groo get caught up in the middle of this crazy war, but I'll get plenty of chances for that sort of thing later. I'll take what pleasure I can wherever I can find it.

This issue's stats:
Recurring characters: The Sage, Arba and Dakarba, and what I imagine is the final appearance of the Great Wizard.
Hidden message(s): The name of this sunken ship is "The Hidden Message": 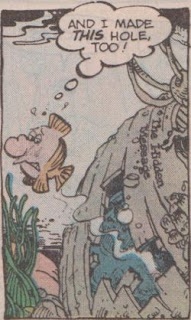 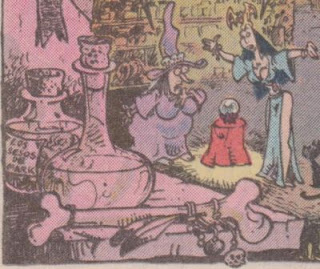 Moral: "Even the most powerful being is at the mercy of the weakest." I don't think that's actually true, and it doesn't really even fit this issue.
Spanish words: The aforementioned label reads "Los sesos de Mark", or "Mark's brains". The spell the Great Wizard uses to turn Groo into a fish is "Guachinango merluza percebe!", which translates as "Snapper hake barnacle!"
Running jokes: The joke about the Sage's dog's name has migrated from the letter column to the main story, with characters throughout asking what it is, until the last panel finally reveals it, and throws in another letter column joke to boot: 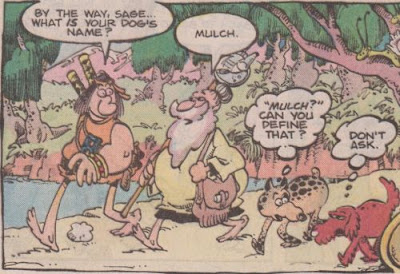 Mark Evanier's job(s): Gastriloquist. There's also a note from Mark saying that he's running out of these, which we know isn't true, since he keeps coming up with new ones for a hundred more issues or so.
Letter column jokes: This issue introduces a long-running letter column joke, and one of the first to be initiated by a reader. A fellow named Steven W. Ebner (who chose to use his real name, since he's not T.M. Maple) decided to send the Groo Crew a bad poem every day until he finally got a letter published, and Mark shares several of them here, with the promise of more to come next month. They're pretty awful; here's a sample:


How long do I have to hunt and peck--
And spew forth junk and stuff and dreck--
Before I see my name in print--
Beneath a Groo-gram? Get the hint?

This probably led to years of people sending in awful poems to try to get in the letter column, but we'll have to see how that turns out.
Miscellaneous: I liked the graphic at the top of this ad for American Comics in Gainesville, VA, with the Punisher using a Kirbytech gun to ignite the words "Hot Comics!" with a blast of flame: