The Neverending Fray: Dogs are not good with swords 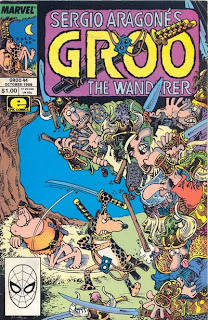 The creative team apparently liked the fantasy sequence last issue in which Rufferto dreamed of wielding Groo's swords and being a hero, because they pretty much built this whole issue around it. There's a pretty standard scene in which Groo charges into a battle to stop some bandits, but accidentally kills all the guards and lets the bandits get away, but then almost the entire rest of the issue is given over to a long daydream of Rufferto's, where he imagines taking over for Groo in a rescue of a kidnapped dog. He fights his way through several bad guys and ends up fighting in a gladiatorial arena, carving up all the evil thieves and soldiers he meets with Groo's swords. But while it's a cute idea, it goes on for way too long, to the point that Rufferto himself seems to acknowledge its tiresomeness:

The problem is, it's just not funny, outside of the semi-humorous visual of a bipedal dog getting in swordfights. Rufferto's idea of himself as a hero is ultra-competent, which stands in pretty stark contrast to the bumbling Groo, and while that's not surprising, considering his idolization of his master, it's just one scene after another of him killing everyone who gets in his way (often after they've surrendered, to add a disturbing note to the proceedings). The funniest moment is at the very end, when he has a romantic kiss with the rescued dog: 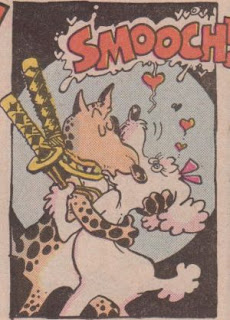 A following scene of Rufferto trying to wield Groo's swords in real life is pretty funny too, managing some pretty great physical comedy even from a dog: 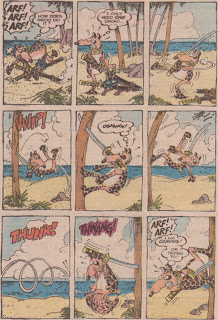 It's a nice contrast to the lengthy fantasy, but it's much too little to save the issue, which ends up being a tiresome exercise rather than a fun flight of fancy. That's probably to be expected here and there throughout the series, as the creative team would kind of go wherever their imaginations led them, and more often than not, they would wring great jokes out of it. Unfortunately, this is one of the times they didn't really do so, but luckily, it's definitely the exception rather than the rule.

This issue's stats:
Recurring characters: None, although the Groo Crew (Sergio, Mark, Stan, and Tom) appear in this crowd scene, along with some cameos from people like William B. Gaines and Al Jaffee: 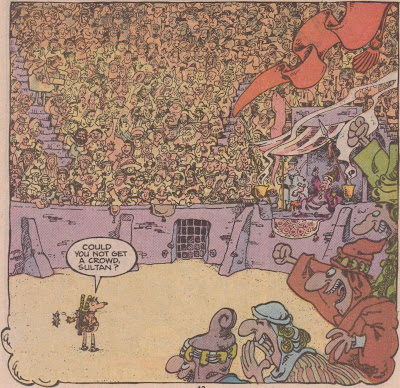 Hidden message(s): Didn't find it. UPDATE: As revealed in issue #58, it's written upside down across the banners on these guys' trumpets: 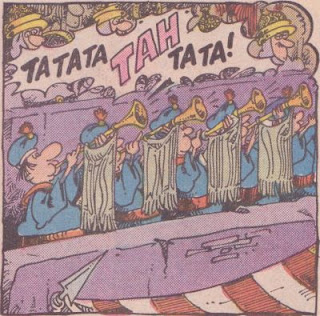 Moral: "Fantasy is a nice vacation, but reality is where you spend your life."
Spanish words: The Sultans of Galleta and Canino are named after the words for "cookie" and "canine".
Running jokes: There's a "Did I err?", and I don't think I've mentioned this one before, but there's an example of the joke where somebody calls Groo a series of insulting names, and he responds, "Just what are you getting at?"
Mark Evanier's job(s): Musard ("dreamer; absent-minded person")
Letter column jokes: When reader Patrick Hayes comments that he's glad Groo confessed to liking Rufferto rather than running the idea of his dislike for the dog into the ground, Mark takes mock offense, saying that they have so few jokes, they have to milk them for every drop of humor. Well-known Groo fanatic Gary Grossman writes a letter composed almost entirely of words beginning with the letter G, and reader James Calloway finds a way around Mark's restriction against defining mulch by doing it in a letter.
Posted by Unknown at 6:00 PM