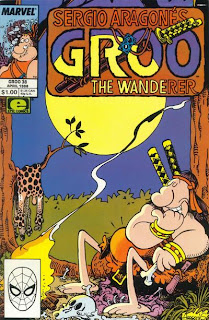 The series had been hinting at the idea that Groo might eat Rufferto for a while by this issue, but even though we knew it was never going to happen, this issue at least lets the character think it did. Groo stops at a restaurant, offers the cooks a measly couple of coins to cook him something, and asks them to serve his dog.  also They make him some soup consisting of dirty dishwater and food scraps, but because he's dumb, he loves it: 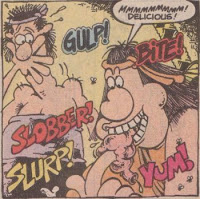 Coincidentally, some guys who want the collect the reward for Rufferto's return to his original owners kidnap the dog, and due to a sitcom-like misunderstanding, he thinks he ate his pal: 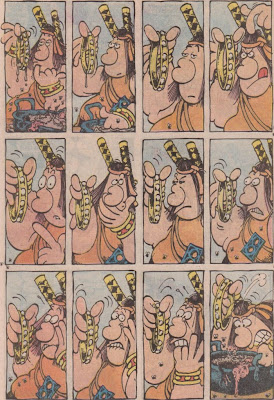 I always like a scene of Groo trying to figure something out, but that one is especially effective, with the segmentation of the page into so many small panels really emphasizing the amount of time it takes for a bit of information to get through his thick skull.

The apparent death of Rufferto gives us the basis of an issue in which Groo continually mourns his beloved companion, his reactions getting funnier and funnier as everything he sees reminding him of his lost friend:

There's also a pretty inspired dream sequence that literalizes Groo's guilt, as multiple versions of Rufferto question his loyalty, and eventually cook and eat him in revenge, somehow preparing an entire meal's worth of food that all bears Groo's face: 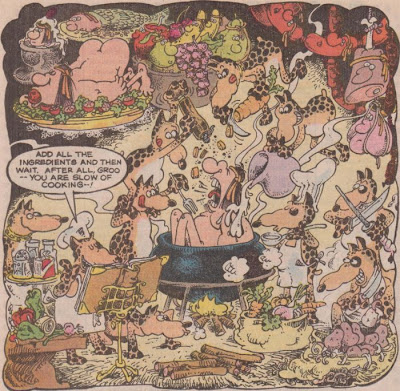 The rest of the issue works as background to this ongoing display of emotion, full of the usual shenanigans, as Groo is tasked with recruiting a new army for a general after he slays or injures all of his current soldiers. He ends up rounding up some men, but still manages to ruin the general's plans, even though he's constantly distracted by his grief. And even though he manages to stumble right into the path of Rufferto's kidnappers, he's too dumb to figure out what had actually happened, so the tearful reunion is delayed until the next issue. Whatever happens, it's sure to be funny.

This issue's stats:
Recurring characters: The Sage appears in Groo's dream, as does a version of Rufferto dressed as the Minstrel.
Hidden message(s): In Groo's dream, it's included on this menu that appears to consist entirely of repetitions of the word "Rufferto" (which is strange, since Groo can't read): 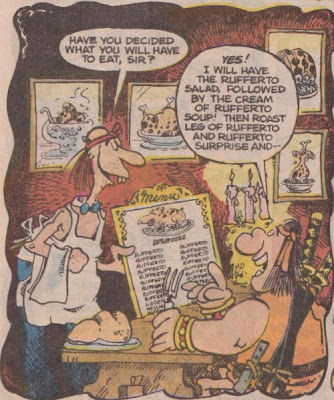 Moral: "You never know what Love is until you lose it."
Spanish words: Pelon, the general, has a name which is Mexican slang for "bald guy" (we never see him without a hat to find out if it's apropos). Tazon, the city Pelon wants to conquer, means "bowl"
Running jokes: This seems to be the end of the jokes about Groo eating Rufferto. Groo would prefer to dream of frays or cheese dip. In a variation on the "slow of mind" joke, the Ruffertos in Groo's dream call him "slow of cooking".
Mark Evanier's job(s): Gerent ("one that rules or manages")
Letter column jokes: There are no letters this month due to the annual appearance of the Statement of Ownership (which lists average monthly sales at 108,158 copies, with the most recent issue selling 95,224 copies), which Mark claims is "the best reading you'll find in your comic shops today", says they're considering expanding it to fill each monthly issue, and figures it would be near perfect if they could work a mention of "mulching" in it. He also thanks Phil DeWalt (who apparently worked on the comics during a hurricane which tore part of the roof off his house) for filling in for regular colorist Tom Luth, who supposedly fled to Europe to get out of coloring Sergio's artwork. There's a promise that no more Steven W. Ebner poems will ever appear in an issue, and a plea for readers to stop sending in samples of mulch or fertilizer, since "the Marvel mailing room is starting to small like a stable and vegetables are beginning to sprout amidst the mailbags." Finally, Mark announces that a Groo poster will be available soon; I'll have to try to acquire one of those someday...
Posted by Unknown at 6:00 PM