The Neverending Fray: Family is bad for you, Groo, don't try to start a new one 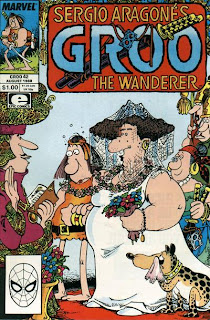 This issue continues with the gypsy stereotypes, but luckily it downplays this aspect, mostly turning Granny Groo and her minions into a band of schemers who are constantly trying to come up with ways to cheat themselves into money. The story revolves around one of their plots, a complicated affair in which they hope to marry Groo off to a princess, but first have to marry him to an ugly farmer's daughter in order to gain the funds to transform themselves into a royal entourage. This all provides the chance for plenty of good jokes, including Groo and his would-be bride's mutual revulsion: 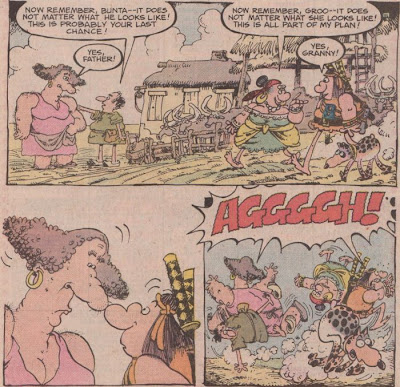 After the ceremony, the gypsies spirit Groo off to attempt to transform him into a prince, which makes for some excellent comedy as he struggles to understand the role he is supposed to play: 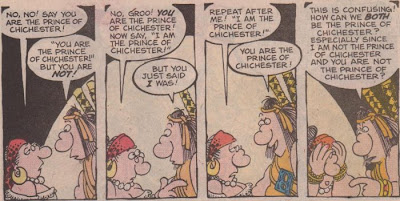 They eventually determine that the reason the princess has trouble finding a husband is that she insists on marrying for love, but once she realizes the true identity of her suitor, she decides to marry him after all in order to teach her father a lesson. Unfortunately, none of the various parties have learned how fruitless it is to base any plans around Groo, and he manages to ruin everyone's schemes all at once in a moment that the episode builds to perfectly, allowing for a great example of the "everyone angrily chases Groo" ending. It's a pretty great example of the mastery of structure that the creative team has acquired, and a good sign for the series' future, as it settles into a groove of excellence. More, please.

This issue's stats:
Recurring characters: Granny Groo again, and Lil' Grooella appears in a flashback. The Groo Crew (Sergio, Mark, Stan, and Tom) show up on the title page, horrified at the destruction Groo was capable of even as a child: 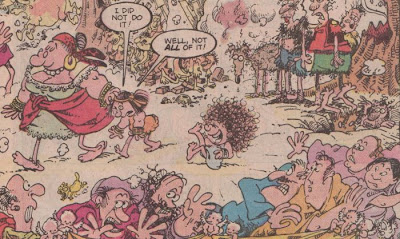 Hidden message(s): Its letters are secreted upside down among the flowery decorations surrounding the issue's title: 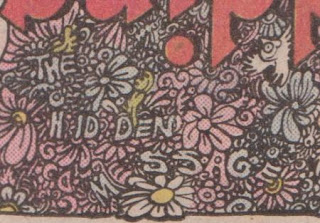 And there's another one written in the priest's Bible during Groo's second wedding: 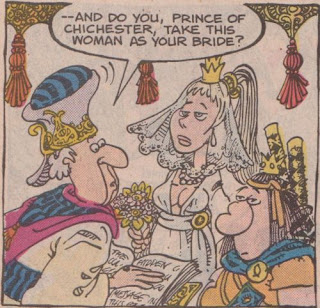 In fact, in another panel on that page, the text in the Bible says "How many hidden messages did you find in this comic? Ha ha ha," so maybe there are more I missed.
Moral: "He who marries for money never marries for real."
Spanish words: None.
Running jokes: At least one running joke begins here, with the phrase Groo is drilled to remember ("I am the Prince of Chichester!") popping up in future issues. There's also a gag in which Groo keeps wondering "Start what?" after the following exchange:

I don't remember if that one continues beyond this issue, but it might. There's also a mulch reference.
Mark Evanier's job(s): Nomancer
Letter column jokes: In response to a request for a second Groo title, Mark announces The Groo Chronicles, which repackaged the pre-Marvel Groo stories. He says there will also be "some new stuff," but I never bought any of those issues, so I don't know if that's true. A list of numbered questions from reader Tracy Abbott includes one asking why people say they have a complete collection except for a certain issue, which prompt Mark to joke that Groo is unique in that collections of the series go up in value according to how many issues are missing (he also claims this is a "cheap switch on an old joke about winning a week's vacation in Philadelphia). Tracy also asks why people write and why they think their letter will be printed, so Mark talks about the huge amount of mail they receive, "some of it even not from Steven W. Ebner." He describes how the letters are received, read by Mark and Sergio, and then retyped for publication by Mark's associate Tracy Abbott, realizing in the middle of a sentence who the writer of that particular letter is. Finally, in response to a reader named James Troesch who says he wants to be just like Sergio, Mark claims that he and Sergio bring great shame to their families by creating Groo, and James should learn from their mistakes, maybe even being lucky enough to someday be someone who doesn't read Groo.
Posted by Unknown at 6:00 PM