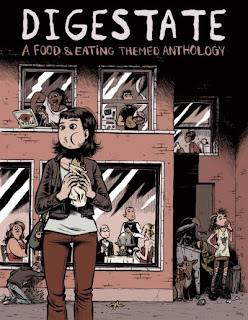 Judging by the title of this anthology, it's not only meant to be about food, but should hopefully give readers some ideas to consider, perhaps implanting them with, if not full-on change in the way they eat, at least a consideration of what they put into their body. That seems to be editor J.T. Yost's intent, at least, judging by the semi-confrontational nature of his piece. Of course, not all the contributors followed this direction. Actually, stories fall into one of three categories: autobiographical tales involving the cartoonist's relationship to food, issue-based looks at where food comes from and the morality of eating it, and other stories that happen to feature food in some respect. There are also a few illustrative pieces from the likes of Kevin Cannon, Danny Hellman, and John Kerschbaum, with the latter contributing pieces which open and close the book with a perfect evocation of the title, the inside front cover depicting a multitude of anthropomorphic foodstuffs marching into a gaping mouth, as if the book itself is chowing down on a huge meal, and the inside back cover matching it with a hilariously disgusting end result, an image that won't soon leave the mind of anyone who sees it. 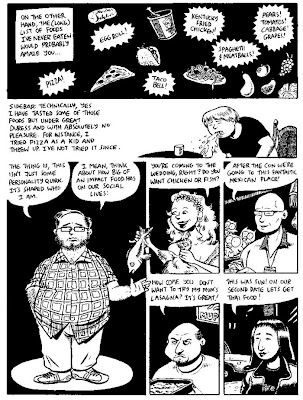 When it comes to the comics themselves, the autobiographical stories vary from standard descriptions of the kind of food the cartoonist ate as a child (Liz Prince, Jeremy Tinder, Ayun Halliday, Tod C. Parkhill, Alex Robinson), to relating food-related incidents (Noah Van Sciver, Pranas T. Naujokaitis, Nicole J. Georges, Jonathan Baylis and Lisa Rosalie Eisenberg, K. Thor Jensen, Ben Snakepit), to discussions of personal eating philosophies (Sam Henderson, James Kochalka, Al Ortiz, K. Thor Jensen, Hazel Newlevant, L. Nichols, Kieth Knight). By the end of the book, a lot of them seem to blend together, but some of them stand out, like Alex Robinson's discussion of his phobia about eating unfamiliar foods, Noah Van Sciver's funny story about the consequences of eating too much Raisin Bran, and Jeremy Tinder's story about getting in trouble as a kid for accidentally letting an entire freezer full of meat thaw out and leak blood everywhere. Marek Bennett's "Successful Slaughter!" is also quite good; an excerpt from his Coffee+Dumplings+Komiks book-in-progress about living in Slovakia, it relates an incident in which he went to a neighbor's house for a "slaughter", in which the family cut up and wrapped half of a bull, then cracked the bones open in order to use the marrow for soup, all while drinking vodka and chatting about subjects like the uselessness of the Hungarian language. Bennett depicts everyone as animals like rabbits or bears, but he gives the characters a nice expressiveness, and really communicates a lovely inter-personal atmosphere. 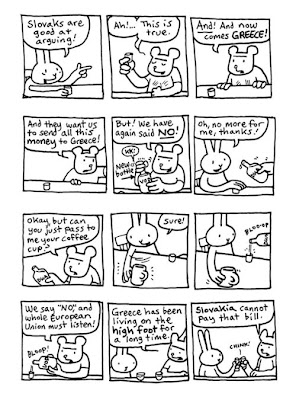 The third category, that of stories that contain food in some aspect, is kind of hit or miss, ranging from the weird, somewhat impenetrable stories of Josh Bayer, J.T. Dockery, Aron Nels Steinke, Renee French, Sophia Wiedeman, and William Cardini, to the goofy gag comics of Sam Henderson and Dan Piraro, stories featuring anthropomorphic foods by Josh Burggraf and Minty Lewis, and fairly entertaining tales of slacker superheroes by Darryl Ayo and a doggy with a gross diet by Gary Fields. Adam Hines, creator of Duncan the Wonder Dog, has an ambitious story called "Last Thoughts From the Watchtower" that layers time-jumping imagery, narration taken from a Looney Tunes cartoon, and sidebar text involving a message from an immortal speck of a star, all adding up to a confusing whole that I kind of admired, even if I didn't really understand it. Victor Kerlow's story about a guy with a taco for a head encountering resistance when he tries to buy food from Taco Bell is amusing, and it fits the impetus of the title by making one consider some of the oddness of what we eat. Anuj Shrestha's "Foodies" is a creepy little tale of what people might actually be getting from the closed-off kitchens of gourmet restaurants, featuring nicely-realistic art that makes the twist that much more disturbing. Sungyoon Choi's "Piggy Piggy" is a short series of dreamlike images involving the eating of pigs. Neil Brideau's "Tell Now, the Tale of the Argus Mushroom!" is a neat sci-fi story in which some alien(?) kids learn about how a scientist ancestor of their tribe used a certain mushroom to genetically engineer them into dominance, with a funny punchline that once again ties into the theme of the inherent weirdness of eating. Jonas Madden-Connor has a quirky story about a resident of the future imagining himself as a 21st century woman (or is it vice-versa?) who doesn't have to eat through a tube. Jeff Zwirek contributes a short gag strip about a caveman and his mate that features some nice, thick linework. And Box Brown's "When Cows Ran Free: 1000 Years After Meat" is a quick glimpse of society in a meatless future, which is only slightly different from our present aside from the games kids play with each other.

As entertaining as all of those stories can be, the last category, featuring journalistic stories and pieces in which the creators confront themselves or the reader about the morality of what they eat, is the real highlight of the anthology. French cartoonist Cha (who also drew the cover) contributes two stories featuring a character called Gwenaelle the Baby Sitter, who torments her charges with the hard truth about the suffering of animals on farms. She kicks off the book with a recasting of "The Three Little Pigs" as piglets who are born on a cold factory-farm floor before running off to escape the "Big Bad Farmer", who eventually captures them and has them mercilessly butchered; she ends the book with another tale of the horrible lives of dairy cows. It's incredibly expressive, cartoony work, creating cute, lovable animals whose deaths are especially disturbing. 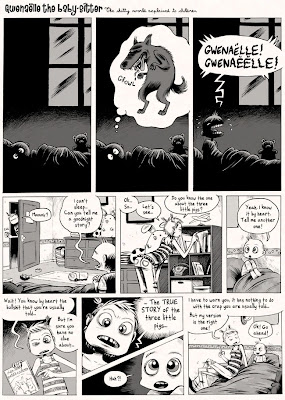 Other "advocacy" or journalistic stories include C.M. Butzer's "20 Billion Chickens", which looks at the huge number of chickens on the planet, the vast majority of which are raised in inhumane factory farms; and Jess Ruliffson's "City Chickens", a nice, naturalisically-illustrated piece about a community garden in New York City that raises chickens. A couple of the autobiographical stories overlap with this category as well, such as K. Thor Jensen's story about how accidentally severing two of his young daughter's toes opened his eyes about the reality of meat, or James Kochalka's spiritual attempt to justify the morality of eating meat in his inimitably open-hearted fashion.

But the best piece by a long shot is J.T. Yost's "Slaughterhouse Stories", a testimony from a long-time employee of the John Morrell company who details, in excruciating fashion, the awful things that go on inside a slaughterhouse. Interestingly, Yost holds off on levying vegetarian outrage at the barbaric nature of the proceedings, letting "Craig's" words tell the tale of how corporate greed not only encourages animal suffering, but also endangers human life by insisting on keeping up a pace that all but ensures that hogs are brutally beaten, improperly stunned, bled out while alive, and eventually drowned in boiling water. The cost-saving measures that the higher-ups in the company took to increase production are horrifying in their callousness, making the employees struggle to do an already-dangerous job while keeping constantly on edge in case live animals get loose and cause injuries. Yost stretches the story out to an exhausting length, filling the pages with large images and stark text, but not sensationalizing the subject as much as he could have with blood and gore; instead, he mostly limits the ever-present blood to dark splotches of ink that suggest the horror rather than shove it in the readers face, and focusing as much on the workers' exhausted faces and some of the darker implications like the alcoholism and abusive relationships that many men fell into after killing thousands of beings each day. It's a hard-to-read story, but it's not a preachy one, leading readers to the conclusion that while eating meat might not be morally wrong, holding life both human and animal at such a low value certainly is.

Yost's story alone is worth reading this book for, but all in all, it's an impressively rich collection of comics that covers a wide variety of well-known and under-the-radar creators, with material that is funny, thought-provoking, beautifully drawn, and well-written. As a successful project that resulted from the ever-growing method of crowdfunding (via Kickstarter), it's a sign that the vast pool of comics-making talent is deep and wide, and given the chance to collaborate toward a theme, can deliver quality comics in spades. If this is the kind of book that results when such creators work together, the future is bright indeed.
Posted by Unknown at 11:44 PM