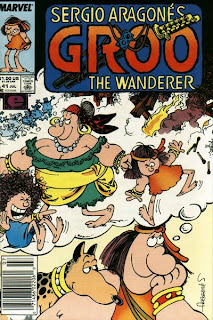 It might be due to living in more "sensitive" times than the era in which this comic was created, or it might be because an increase in global awareness has brought into view the plights of people who Americans might not have realized existed, but this issue is kind of uncomfortable to read, dealing as it does with Gypsies of the stereotypical variety, the kind who tell fortunes, lie, cheat, and steal from everyone they encounter, then travel away in their wagons before they can be punished. That might seem like using a character type out of an old storybook, but it's actually racist imagery targeting the Romani people, and while it might not have been offensive back in the 80s (at least, not in the United States; the issue was probably more visible in Europe), it certainly is today.

It's an unfortunate aspect of the story that colors what should be a touching reunion between Groo and his old caretaker, who is known only as Granny Groo. She's apparently Groo's actual grandmother, or at least a relative, considering that she shares his and his sister Grooella's distinctive nose, and she seems to share a familial (or maybe it's just societal) contempt for her grandson, constantly referring to him with mean names like "my little rhinoceros-faced whelp" or "my little fish-faced jackass", and attempting to use him in her schemes to cheat people out of money, and then spanking him when he inevitably fails. Groo attempts to remember his childhood with her fondly, allowing for several flashbacks to his childhood with her, but every memory ends with a spanking; hopefully he'll realize the extent of the abuse in this relationship and part ways with her soon.

But for this issue at least, he does end up working with her when he gets hired to chase some Gypsies out of a town and she turns out to be among their number. She doesn't react very well to his approach: 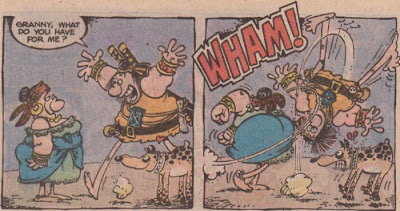 But she soon recruits him into her schemes, this time using the threat of his destructive nature to basically run protection schemes on people: 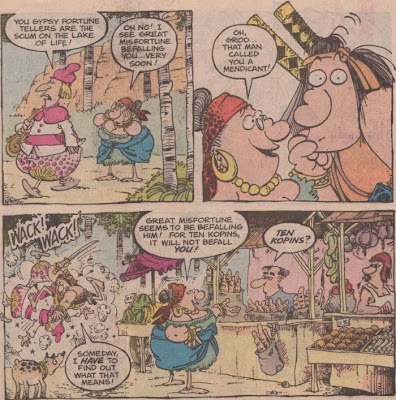 This is kind of funny, but it's also disconcerting to see her taking advantage of Groo like this. Sure, lots of people in the series have also tried to manipulate Groo to their own ends, but few have done it through exploiting his affection for them while still treating him so badly. Granny Groo does get some comeuppance, as would be necessary to follow the rules of the series, but it's not as satisfying as it could be, especially due to the ugly stereotypes that persist around her and her people.

There are still some good jokes, like this one in which Groo tries to extract money from a hapless bystander but can't get his words to come out right: 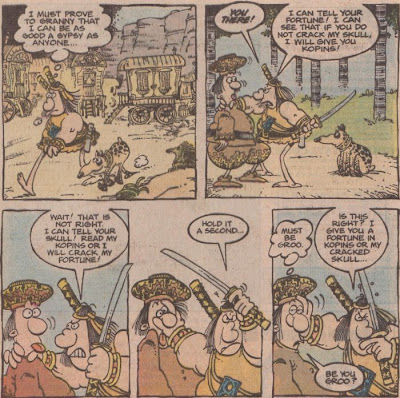 But overall, this issue leaves a bitter taste behind, making the reader feel sorry for Groo not because of his stupidity, incompetence, or impulsiveness, but because he is being mistreated by somebody with whom he is tied to by blood, unable to sever ties and free himself of the unhealthy relationship. It's one of the more relatable quandaries he has faced, since everyone has a relative they don't especially like; with luck, he'll be able to extricate himself from the mean-spirited clutches of this awful old hag. But probably not for at least a few issues...

This issue's stats:
Recurring characters: Granny Groo gets introduced here, and she shows up again in future issues, although mostly in flashbacks, if I remember correctly. Grooella appears in the flashback scenes. The Groo Crew (Sergio, Mark, Stan, and Tom) are members of the gypsy camp, appearing more than once, with Mark even getting a line and a fourth-wall-breaking thought bubble:

Hidden message(s): In this panel, the wall behind Lil' Groo has a bunch of ones and zeros on it: 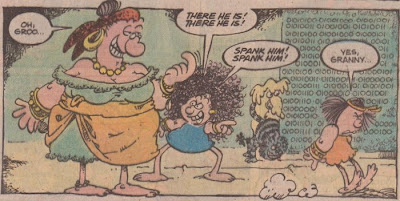 According to http://www.convertbinary.com/ that reveals the message "THIS IS THE SECRET MESSAGE IN NAR] CODE" which seems to contain a typo or something. There's also a message that states that it is not the hidden message later in the issue: 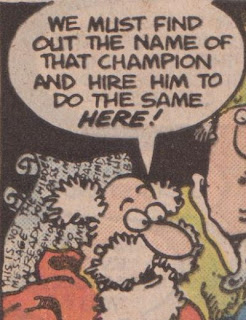 Moral: "You are never too old to have your seat tanned by your grandmother."
Spanish words: The towns of Cebolla and Ajo are named after the words for "onion" and "garlic".
Running jokes: Granny Groo gets Groo to beat up a guy by saying the guy called him a mendicant. Groo and Rufferto demonstrate their atrocious eating habits.
Mark Evanier's job(s): Tregetour ("A juggler who produces illusions by the use of elaborate machinery")
Letter column jokes: Two readers write in with numbered lists of questions, and Mark answers them, but doesn't number his answers, which makes for amusing paragraphs of short, clipped sentences like "Because they're stupid. It doesn't have one. ... .She'll be back" and so on. Reader Mike Wallace supplies what he says is a list of ten facts about himself, but only includes nine items, and includes "You are going to print this letter" twice. And, in what I think kicks off a long-running letter column joke, Mark says that Sergio only has half a moustache.
Posted by Unknown at 6:00 PM