The Neverending Fray: Granny Groo is a terrible, terrible person 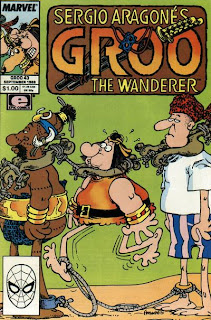 This issue cements my hate for Granny Groo when she, having decided she is unable to exploit her grandson, gets rid of him by selling him into slavery. What a swell lady. We learn in a flashback that this is a scheme she used to run when Groo was a kid, selling him to some family, then later sneaking him a potion that makes him sick so they will give him back. But this time, she has no intention of rescuing him; after receiving her payment, she waltzes off out of the book, hopefully to plague her kin no more (she does show up again in flashbacks, but I don't remember if she comes back in the "present"). 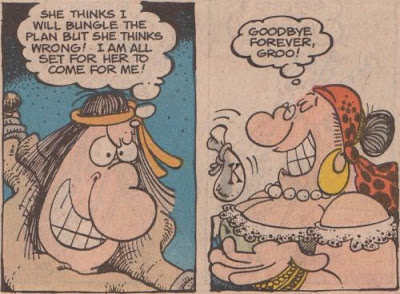 Being a slave does allow Groo to do some funny stuff though, as he insists on staying in shackles and waiting for Granny to rescue him, even after he repeatedly breaks out or is set free: 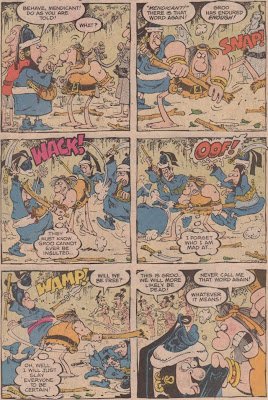 There's also an odd interlude in which Rufferto, having been left in charge of Groo's swords while he is in the slavers' custody, makes up a story to impress some other dogs, coming up with a silly scene in which he runs around on two legs, fighting off bad guys with the swords:

It's a weird little sequence, seemingly included to pad out the page count while the creative team was figuring out how to get rid of the monstrous Granny Groo. These multi-issue arcs in which characters get introduced or "major" events happen seem to have settled into a standard length of three issues, so this one is the finale, making for something of an awkward transition back to the status quo. Good jokes still make their way into the story, and Sergio's art is as wonderful as ever, but it's becoming clear that at this point in the series' evolution, continuity is more of a hindrance than a boon. Hopefully the single-issue stories will continue to be the prevalent method of storytelling for a while yet.

This issue's stats:
Recurring characters: Granny Groo, and Lil' Grooella gets another flashback appearance.
Hidden message(s): I didn't find any, although there's an in-joke in which a monkey thinks "Vootie.", which is a reference to the famous monkey J. Fred Muggs: 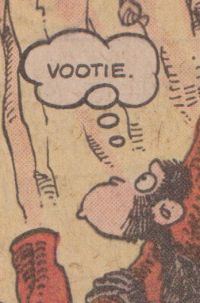 UPDATE: As revealed in issue #58, it's written in the leaves of this tree: 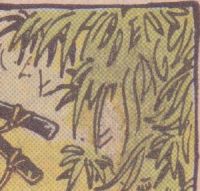 Moral: "Friends are people who are there when you need them. (Also applies to dogs)"
Spanish words: None.
Running jokes: Groo sets a record for the longest gap (at least chronologically) between the initial statement and the "Say, what did she mean 'slow of mind'?" callback, with Granny Groo insulting him in a flashback, and Groo remembering it years later. Lil' Groo does some mulching. Groo gets called a mendicant.
Mark Evanier's job(s): Ripieno
Letter column jokes: Reader Blake Vojta asks how many copies of Groo Sergio has signed, and Mark replies that unsigned copies are rarer than signed ones, and Sergio should save time and go to Sparta, Illinois, where the comics are printed, and sign each copies as it comes off the press. Reader J.A. Todd rules out "video cassette" and "pop tart" as answers for the blue thing on Groo's chest, and decides it must be a carburetor gasket. He also asks what the stuff is in Sage's flask, which Mark declares is water, in hopes that it won't start another running joke (don't worry, it does anyway).
Posted by Unknown at 6:00 PM