One Piece Is Awesome, Example #54

If you want tragedy and drama, the extended flashbacks in Eiichiro Oda's One Piece are where it's at. The one that takes place in volume 63 is no exception; it details the struggle for the denizens of Fish-Man Island to gain acceptance among humans, focusing on the heroic Fisher Tiger, who we had previously learned led a raid on the capital city of Marijoa and freed all the slaves (both human and fish-man) being held there. We don't get to see that battle, but we follow the aftermath, as Fisher Tiger and his crew of pirates keep fighting to free the oppressed and fight back against the tyranny of the humans. Interestingly, since he's fighting for acceptance, he insists his men refrain from killing humans, no matter how much they want revenge for decades (centuries?) of oppression: 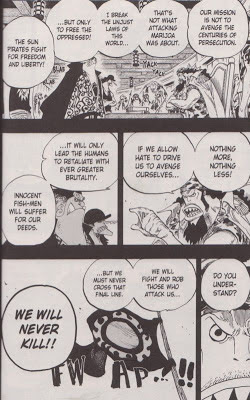 What really gets me though is when Fisher Tiger is grievously wounded, and the only thing that can save him is a blood transfusion from a human, but he refuses: 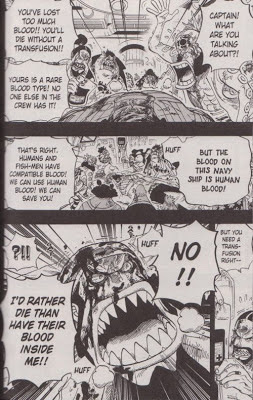 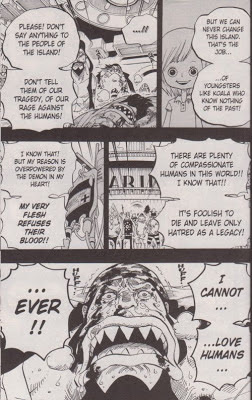 As much as he wants the best for his people, struggling to do what's right even when his entire race is despised and oppressed, he can't bring himself to completely get over his hatred of the humans. This is fascinatingly complex character work, more of the thing Oda does so well, situating his rich characters in the distinctive world that he has created, but still reflecting the societal concerns of the real world. I especially like the way he recognizes that while prejudices and hate can be difficult to stamp out, if we fight for what is right, future generations will receive the benefit. It's optimistic, but I feel like it's happening in the world every day, and the way Oda details it here is beautifully encouraging and moving. As ever, I'm amazed by the richness that he brings to his work. This is great stuff.
Posted by Unknown at 12:00 PM