One Piece Is Awesome, Example #53

One thing I like about Eiichiro Oda's One Piece is the letter columns which are included in the collected volumes. I don't know how common this is in Japan, but it's the only translated manga series I know of that includes this sort of material, and it's absolutely essential, adding a glimpse into Oda's sense of humor and camaraderie with his fans, as well as a great source of information about the series itself, with Oda explaining little details of his world or confirming little artistic details and Easter Eggs that fans ask about, or discussing the inspirations for various characters or locations. One example of the latter from volume 57 was when a fan asked about the three admirals of the navy, and Oda confirmed that they are based on the famous Japanese actors Yusaku Matsuda, Kunie Tanaka, and Bunta Sugawara: 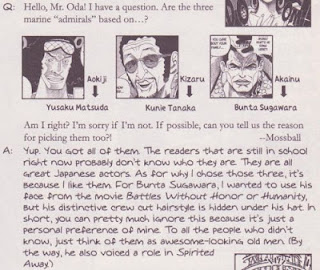 Likewise, he revealed in volume 58 that Emporio Ivankov, the world's greatest drag queen, was inspired partly by Dr. Frank N. Furter from The Rocky Horror Picture Show, but also by the cross-dressing stage actor Norio Imamura. And what's more, when Imamura found out Ivankov was based on him, he auditioned as a voice actor for the role in the One Piece anime, and he was the person who got cast, which is pretty amazing. I love the neat stuff you learn from these pages; how do other translated manga series manage without them?
Posted by Unknown at 12:00 PM