The Neverending Fray: Dogs and jails 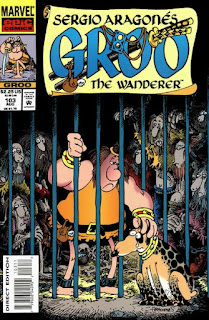 It's nice to get a Rufferto-centric plot once in a while, and that issue does this, splitting its main duo up for most of its length and giving our canine pal a fellow dog to hang out with. It starts when Groo and Rufferto stop to hang out with some guys who turn out to be bandits, and when the authorities show up to arrest them, Groo ends up tasked with escorting them to jail. This separates him from Rufferto, who, along with his new buddy Oso, searches for his master, who he thinks has been imprisoned. And from there, hijinx ensue, with the best stuff focused on Rufferto and Oso repeatedly causing massive breakouts when they try to free Groo from various jails. The two of them have a pretty fun relationship, with Oso being dumb, impulsive, and violent (kind of a stand-in for Groo, come to think of it, although he's more talk/bark than action) and Rufferto often being frustrated with him, but still accepting of him and happy to have a fellow animal that he can communicate with. 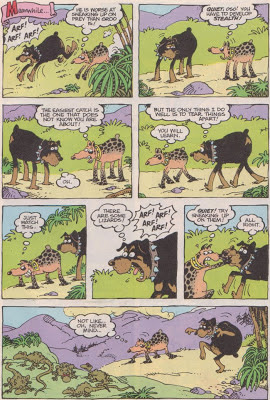 Meanwhile, Groo continues to demonstrate his newfound (semi-)intelligence as he accepts the task of delivering his prisoners to a jail and sticks with it, refusing to be swayed by the bandits' guile. When he can't find a jail that has enough room for them, he ends up figuring out a way around the problem by helping to rehabilitate them: 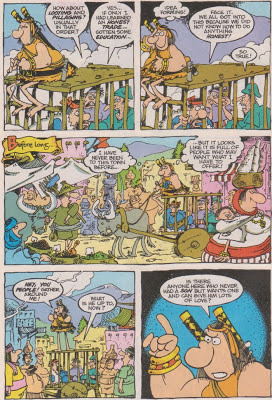 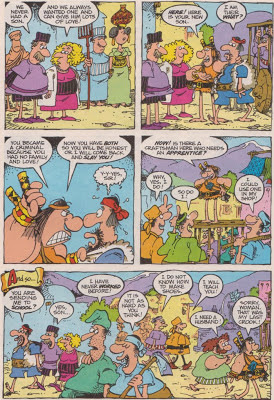 The issue touches on some social issues, such as the necessity for jails weighed against people's preference not to have them nearby, and the way a lack of options can drive those on the lower rungs of society toward crime, but it's a pretty cursory glance at the subject, which is fine for a story like this. If anything, it's an indication of Groo's increasing awareness of the world around him, demonstrating that the knowledge he has gained from his reading is making him consider new ideas and pay attention to how people are affected by his actions. Luckily, he still enjoys frays and does dumb stuff, so we don't suffer for a lack of laughs, but it's fascinating to watch his character develop.


Next: "A Home for Oso"
-----
This issue's stats:
Recurring characters: The Sage stars in a backup story, and Oso will be hanging around for at least one more issue.
Moral: "Where there are hearts of gold, there is no need for bars of steel." And the moral for the Sage backup is "You do not solve a problem by making it someone else's."

Spanish words: Sergio says "lo siento" ("I'm sorry") again. Oso is named after the word for "bear". The town of El Bote means "the pot".
Running jokes: There aren't many of the regular running gags, but within this issue, the robbers mention several times that they like to "rob, loot, and pillage (usually in that order)." And Oso constantly wants to tear people or animals apart, but he never gets to.
Intro follies: Sergio prepares to read an introductory speech that Mark wrote for him, but he forgot it, so he tells the readers to wait until he comes back before they start reading, with the page just ending on a blank panel. I disobeyed him and read the story anyway.
Value-added: This month's puzzle page is an actual puzzle: 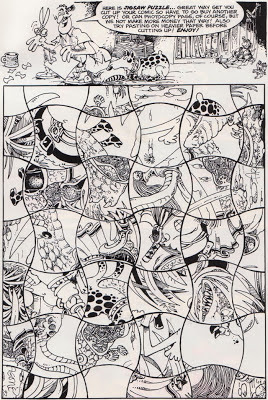 Mark Evanier's job(s): Warden
Letter column jokes: The initial theme this month seems to be threats to Mark's person if he doesn't print people's letters. Matt Peck threatens to go to Mark's house and make him read every Groo ever written. Mark begs for mercy, then realizes he read the letter wrong, thinking Matt had said he would make him write every Groo ever read. Robert Feldman threatens to flood the Marvel offices with cheese dip. Mark isn't worried, since he is located more than 3,000 miles away from New York, and he doesn't think the smell would go much further than Kansas. Joey Cool Nicolosi threatens to reveal Mark's secret fear of Kermit the Frog, which is apparently the last straw, prompting Mark to announce that he's retiring the running gag (or attempting to do so) of sending in these sorts of threats. As a replacement, he suggests "Groo is so dumb..." jokes, providing some examples, including "Groo is so dumb, he thinks Rush Limbaugh is a very fast dance from the Caribbean." He also offers an autographed copy of The Life of Groo to anybody who can get a "Groo is so dumb..." joke printed in some other comic's letter column. I'm not sure if this prize was ever awarded, but I wouldn't be surprised, since Groo fans can be pretty resourceful. Rayson Lorrey compliments Sergio and company on their inclusion of explicit morals in their stories, saying that Sergio is like a modern Aesop. Mark agrees, saying that when Sergio promised to pay him, it turned out to be a fable. Charlie Ehrenpreis thinks James Horton's suggestion of a Groo 2099 comic would be a good idea. Mark says that he wants to revive the 2001 comic as 2001 2009, and since Dark Horse has a book called 2112 and Image has 1963, they should all do a crossover and call it 8175. John Lewis wonders if he's the oldest Groo fan on record, at 60, so Mark asks if anyone else wants to lay claim to the tile of oldest Groo fan (or Groo fan, period). He also notes that his mom is older, but he doesn't think she counts, since she gets her copies from him at 20% off. Zeke Saed says that he chose to write to Groo instead of to his grandmother, so he asks Mark to print the letter to make sure she reads it. And in an M. Wayne Williams reference, he says she only reads one issue of Groo a year, so he wants to make sure his letter gets printed in an issue she'll read, not one she'll skip. Mark agrees, claiming he'll print the letter each month for the next 12 months. We'll see if he keeps his word.