One Piece Is Awesome, Example #47

As the plot of Eiichiro Oda's One Piece has progressed across nearly 50 volumes, the main subplot of the series looks to involve our heroes standing up against the power-hungry and corrupt, especially the World Government and its sanctioned group of pirates, the Seven Warlords of the Sea. I'm starting to formulate some theories about where the series is going to go as the Straw Hats continue to get stronger and come into more and more conflict with world powers, and I expect that eventually the people are going to start rallying behind them and stand up against their oppressors. We get a taste of that in the big climax of the Thriller Bark storyline in volume 49, as the Straw Hats look like they're going to face defeat against the hugely powerful Gecko Moria (one of the aforementioned Warlords), who has stolen the shadows of four of their number, and also a large number of others on the island. Anyone without a shadow will disintegrate in the sunlight, which is fast approaching over the horizon, but while most of the shadowless unfortunates have the impulse to run, their captain, a strange-looking woman named Lola, decides to stand alongside the Straw Hats and face the enemy: 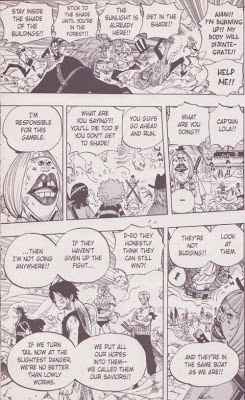 It's not a huge moment, but it's a powerful one, a sign that people are starting to gain confidence in the ability of Luffy and his friends to face down the massively powerful oppressors of this world and refuse to cower under their thumbs any longer. I can't wait to see how this continues into future volumes; as ever, Oda definitely has a long-term plan for the series, and it's fascinating to see it play out.
Posted by Unknown at 12:00 PM