The Neverending Fray: Even when he's smart, Groo is still pretty dumb 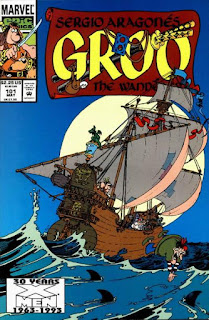 Following the incremental upgrade to Groo's intelligence in issue #100, it looks like the Groo Crew is trying out some new variations on the kinds of jokes they can tell with the character. Now that he can read, he's a bit more confident and less prone to just wandering into whatever circumstances he finds. He's also eager to use his newfound abilities, giving us fun scenes like this one: 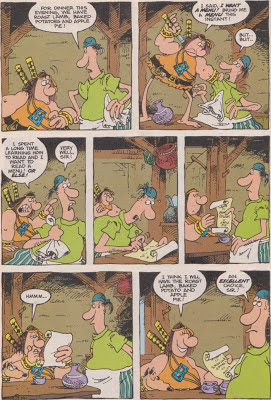 His main goal in this issue is to relocate to a new land where people don't hold such a low opinion of him, which necessitates a sea voyage and allows for the inclusion of everybody's favorite panicky skipper, Captain Ahax. He's as funny as ever, having formulated a grand plan to sail to new territories and escape his ship-sinking nemesis, Groo, but as one would expect, Groo himself ends up on that voyage, prompting more nervous breakdowns. This also provides another chance to demonstrate Groo's increased intelligence when he provokes Ahax for a laugh, something he would have been too oblivious to do previously: 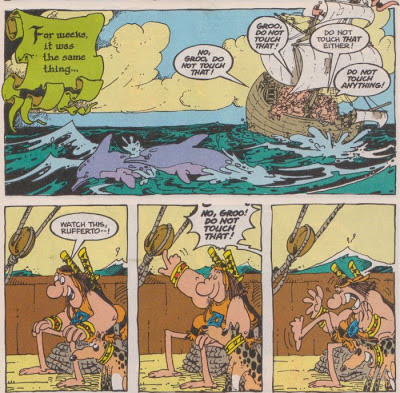 Between Groo and Ahax's quests to move to someplace new and the tension of Groo's expected destruction of the ship, we would seem to have enough plot for one story, but there's also an undercurrent of commentary about the exploitation of resources. The king who sponsor's Ahax's voyage has two advisors, a religious leader and a general, and they both seize the opportunity to expand their influence into new territory. But when they get to the new land, it is populated by what appear to be simpleminded natives who don't put up any fight when attacked and happily hand over any food or riches that the more "civilized" people demand. I'm not sure what the Groo Crew is going for here; there's the obvious power-hungry characters who seek to control others, but the portrayal of the natives as happy to be exploited is kind of problematic. There is an interesting bit about their realization of the ultimate uselessness of gold: 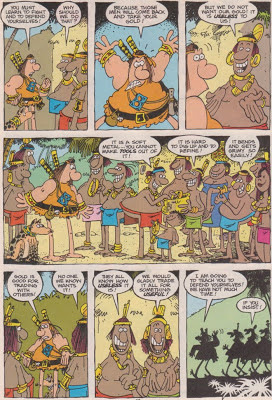 This plot does provide the opportunity to demonstrate another aspect of Groo's increased intelligence: his sense of fairness. When he realizes that he's fighting against people who have no ability or desire to fight back, he switches sides and defends the defenseless, indicating a new sense of honor and a desire to help people out. That might be the real reason for the conqueror/native story, but it seems kind of shoehorned in to the issue when the real focus should be on the Groo/Ahax conflict.

Whatever the case, it ends up being a pretty fun issue nonetheless, indicating a new direction (or maybe just a slightly refined focus) for the series, one that should breathe some new life into it and provide opportunities for more interesting uses of the character and his milieu. Not that it was getting stagnant or anything, but maybe the jokes about every issue being the same had gotten to the Groo Crew and they wanted to prove they could do something (slightly) different. They're still pros, so there will always be plenty of hilarity to be found. I know I'll be happy to keep experiencing it.


Next: Next up is issue #103, "Jailbirds".
-----
This issue's stats:
Recurring characters: Captain Ahax, and Pal and Drumm show up in a backup strip.
Moral: "Some fair deals are fairer than others."

Spanish words: Sergio says "lo siento!" which means "I'm sorry!"
Running jokes: Despite Ahax's best efforts, Groo manages to sink his ship. Rufferto bites a guy on the ass.
Intro follies: Sergio tries to construct a large "welcome" sign for the issue, but it collapses and flattens the rest of the Groo Crew, so he then welcomes everyone to the "big first issue after one hundred old ones!"
Value-added: This issue's puzzle page is a cool maze: 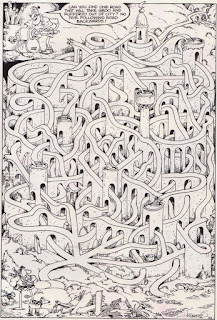 Mark Evanier's job(s): Wordsmith (again!)
Letter column jokes: Aaron Belisle asks why his letter was printed in both issue #93 and 94, wondering if he's the next M. Wayne Williams. Mark explains that it was originally omitted from issue #92 for lack of space, so he added it back into issue #94 without realizing that someone had already included it in issue #93. He also promises to reprint Aaron's most recent letter next month to make sure he sees it. Joel R. Pierce states that he is only writing to prove he can write an intelligent letter, and Mark responds that he's supposed to actually buy a stamp rather than just draw one on the envelope in crayon. Mark Gagnon notes that he realized writing to Groo-Grams is a waste of a stamp, and Mark suggests following Joel Pierce's example and drawing one on (he also makes a joke about Elvis stamps, which were a big deal at the time). Scott Murray contributes a twist on the numbered list of questions by providing a list of answers and asking Mark to "question them". These include "Soon" ("When will Scott Murray write us an intelligent letter?"), "The Minstrel's poems" ("What did Evanier spend most of 1992 writing?"), "Sergio's mustache and Tom Luth's sanity" ("Name two things Mrs. Aragones can kiss goodbye."), and a plug for Mark's writing on the TV show "Bob" ("Describe a shameless plug for a TV series that actually hired Evanier."). Jason Potratz suggests some titles and 90s-style gimmicks for Groo spinoff series, including "The Amazing Groo" (with a cover with a holographic picture of cheese dip), "The Spectacular Groo" (with a glow-in-the-dark picture of cheese dip), and "Groo 2099" (with a 3-D cover of some tubed cheese dip).