One Piece Is Awesome, Example #51

I don't think I've got a lot to say about the Paramount War that takes place in volume 57-59 of Eiichiro Oda's One Piece, aside from the expected assertion that it is amazing, a massive battle scene that pays off the expectations that had been building for dozens of volumes, full of explosive action that involves hundreds (or even thousands) of characters, while still providing some great character moments from just about everyone involved, and culminating in one of the most emotionally raw moments the series has seen (which is saying something). It's an amazing spectacle, an example of how great Oda is at delivering on both mind-blowing action and heartfelt emotion (while still sprinkling in plenty of comedy, somehow managing to include Buggy the Clown's goofy antics and Boa Hancock's awkward crush on Luffy in the middle of the battle without disrupting the high-stakes momentum).

But as great as that is, the follow-up flashback to Luffy and Ace's childhood in volume 59 and 60 is what gets me thinking and considering the themes that Oda keeps returning to throughout the series. They live in a small mountain village, but they end up befriending a boy named Sabo from the nearby city of Goa and hanging out with him among the poor dregs of society who live in Gray Terminal, a giant heap of trash piled outside the city. Fascinatingly, this is actually based on a real location in the Philippines known as Smokey Mountain, and it's an indication that Oda is basing his themes of freedom and inequality on the real world. He does turn the drama up to exaggerated levels to befit the style of his comics, so the big turning point comes when Sabo is forcibly dragged back to his aristocratic family in the city, only to learn of a plan to burn the mountain of trash (along with everyone living in it) in order to clean the city of undesirable elements. It's a horrifying act of pure human cruelty, but what makes it so disturbing is the way the upper-class citizens are completely blase about it, as if they just don't care about the lives of those that are beneath their notice. This gets spelled out a bit too neatly when a rich guy tells his kid, "They're getting their just desserts, child. Think about it. It's their fault for not being born aristocrats," then advises her not to worry about it because she has studying to do. As silly as the exchange is, it hits home for those of us in the first world who can turn a blind eye to the suffering, hunger, and death that we can so easily ignore. Oda doesn't let his characters forget about things so easily though, but when Sabo tries to warn Ace, Luffy, and everyone else, he gets a lesson in the difficulty of bringing about real change: 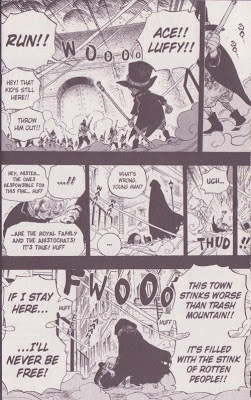 That's Luffy's father Dragon there in the last panel, and we've learned that he's the leader of a band of revolutionaries fighting against the World Government. We've only seen hints of him in the series so far, but this incident seems to be a defining moment in which his resolve to fight injustice was solidified. As ever, I'm fascinated by the ideas that Oda works with in what is ostensibly a kids' series, and I'm excited to see where he goes with them next.
Posted by Unknown at 8:48 PM