One Piece Is Awesome, Example #49

Following the Thriller Bark storyline in One Piece, Eiichiro Oda has kind of gone nuts, moving the overarching plot forward at a breakneck pace, with incident and information accumulating in an exhausting fashion. The Straw Hat Pirates reached a major waypoint in their journey around the world, but while preparing to outfit their ship for an underwater journey to Fish-Man Island, they got mixed up in a huge conflict with the government after learning of the generally accepted practice of slavery practiced by the privileged World Nobles. Oda introduced nine other "rookies", pirates with a level of notoriety similar to Luffy's, and revealed that Luffy's brother Ace had been captured by the government, who were planning to publicly execute him in order to spark a war with Whitebeard, one of the world's most powerful pirates. But before the crew can do much about this, they get scattered to various islands across the sea by a powerful opponent, and Luffy ends up on an island of warrior women ruled by Boa Hancock, one of the Seven Warlords of the Sea. And when he finds out about Ace's predicament, he rushes off to break into the maximum security underwater prison Impel Down and rescue him, where he ends up teaming up with various former opponents like Buggy the Clown, Mr. 3, Mr. 2 Bon Clay, and Crocodile. It's a non-stop rush of action that is compacted into a relatively short number of volumes (considering the length of the epic Water Seven storyline, which was about 15 volumes long), so while it's a blast to read, one almost has to struggle to keep up, with barely a chance to pause and appreciate all the wacky jokes, crazy characters, and explosive action that Oda throws in. But there's one moment in volume 55 that made me marvel at its pure, mind-boggling insanity, and that's when Luffy ends up in a secret floor of the Impel Down prison which is ruled by one of Oda's craziest characters yet: 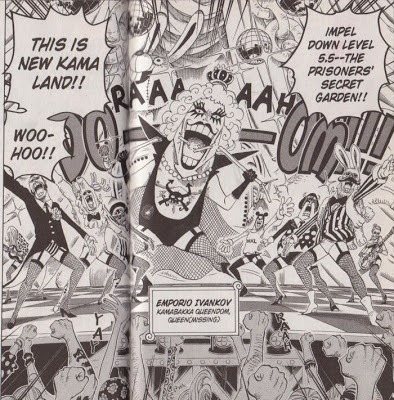 Yes, that is Emporio Ivankov, the world's greatest drag queen, who has managed to build a genderless society of acceptance in the middle of the world's most dangerous prison, a place where he puts on drag shows accompanied by fishnet-wearing weirdos and plots to eventually break out and join the revolution against the government. If I ever needed proof that Oda is an insane genius, this is it.
Posted by Unknown at 6:00 PM