The Neverending Fray: Groo vs. breakables 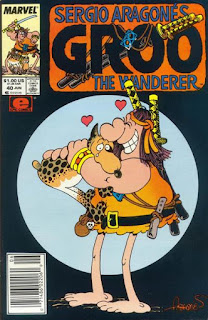 Going back to older issues that I had previously missed can make for a slightly jarring experience, since the tone of the series has shifted subtly over the dozens of issues that took place in the interim. Or maybe this is just a so-so issue, featuring a few laughs, but nothing especially memorable, aside from a demonstration of Groo's single-mindedness when he sets out to achieve a certain goal. That's the story here, with our favorite mendicant looking for a job, but souring relations with a potential employers when he accidentally breaks a glass carafe. He pledges to replace the carafe, and sets out to find a new one, in a quest that ends up taking months, as he searches far and wide for the object, succeeding in obtaining several of them, but always managing to break them before he can get them back to his goal. And when he finally succeeds, it turns out to have been a pointless quest, since the original job would have been at, wait for it, a glass-blowing factory. Hey-o!

It's not a terrible premise or anything, but it gets a bit monotonous, with Groo repeatedly finding carafes and then immediately breaking them. There's one bit in which his stupidity gets kind of frustrating (yet still amusing), when he storms the castle of a king who owns a carafe, and he gets offered a bunch of gold, which would have precluded his need to get the job he's working toward, but he ignores it in favor of the object of his obsession. There are other decent gags here and there, but nothing hysterical enough to make this issue a classic.

I did like this scene of Groo searching far and wide for his carafe: 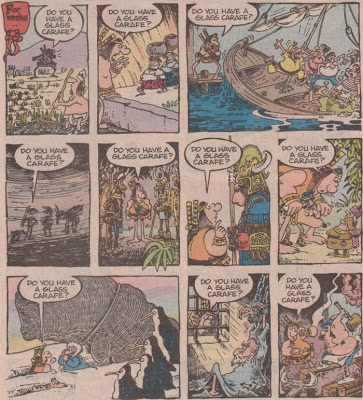 And this moment, in which Groo pointlessly demonstrates his prowess with his swords, was amusing, if a bit more show-offy than the character usually is: 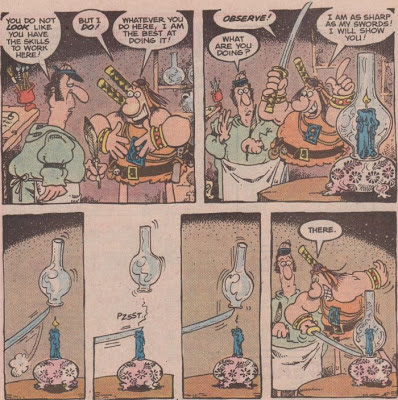 There's always something to enjoy, but having read so many of these stories, I'm starting to feel like I need them to be really good to stand out. I hope I'm not burning out on the series, but I expect I'll quickly be laughing along with the next story I read, any rough spots immediately forgotten.


Next: Another issue which I had previously missed, #68, "The Hero of Lerolero",
-----
This issue's stats:
Recurring characters: None in the story, but the Groo Crew is featured in the Groo-Grams banner:

Spanish words: None.
Hidden message(s): There's one in the flowery decorations surrounding the story's title: 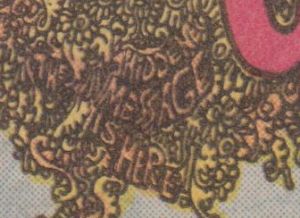 And another one on the papers in this panel: 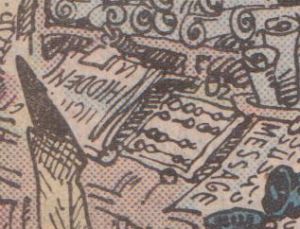 Running jokes: Groo errs. He also manages to sink a boat without even boarding it, and he does some mulching.
Mark Evanier's job(s): Factotum
Letter column jokes: Kuasa Ali hypnotizes Mark and commands him to shave off half of Sergio's moustache, which gives Mark a joke for the rest of the column, interrupting his answers to the rest of the letters to laugh about how ridiculous Sergio looks. This precludes most of the rest of the jokes for the column, although Chris Blunt has a good gag when he asks if when Groo sent Sage to the top of the world, that made him the Ice Sage. Puns!