One Piece Is Awesome, Example #50

Never let it be said that Eiichiro Oda doesn't have a long-term plan in mind for One Piece; he had been showing conflicts simmering in the background for at least a couple dozen volumes before having them finally erupt to the fore in the Sabaody/Impel Down/Paramount War storyline, resulting in an all-out war between the full force of the World Government Navy and an allied force of pirates led by Whitebeard. As of volume 57, the battle is just getting started, but I'm already marveling at the crazy characters involved; it's a chance for Oda to just empty the craziness in his mind onto the page, with dozens (hundreds? thousands?) of characters leaping into the fray. Just look at some of these guys: 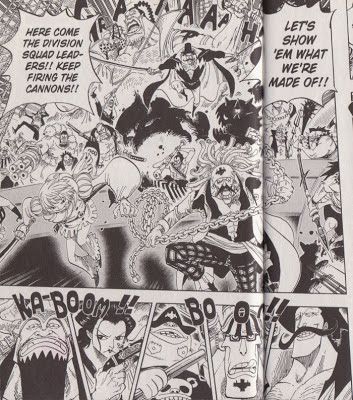 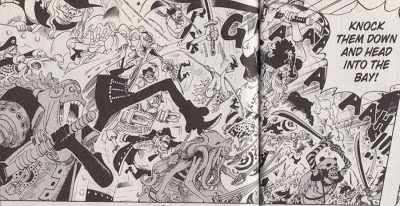 I love that Oda just tosses these designs out there. In earlier volumes, he might have introduced each character by name and explained their powers and abilities, but the scale of this conflict is so massive that he can just cram them into a series of fight scenes and let our imaginations run away with us. Just look at all those guys! There's a guy with a four-barreled gun for a hand wearing a mink stole, a guy swinging around a chain-chomp, a guy with a bunch of spider arms that are all wielding swords, some sort of dalmatian-man, a guy with robot arms, a walrus-man, and who knows what else. It's totally nuts, pure, over-the-top chaos, with the action exploding off the page. I can't wait to see where it goes next.
Posted by Unknown at 6:00 PM