Art What I Like: One Piece Is Awesome, Example #36

As much stirring emotion and awesome action as Eiichiro Oda packs into One Piece, it's still a shonen manga, with a target audience of adolescent boys, which means gross-out jokes make their way into the comic from time to time. However, Oda puts his own weird spin on them, turning them into crazy fighting styles and making them kind of awesome in their own right. Take the introduction of this character from volume 39, a cook who blocks our heroes' progress on the sea train they're fighting their way through: 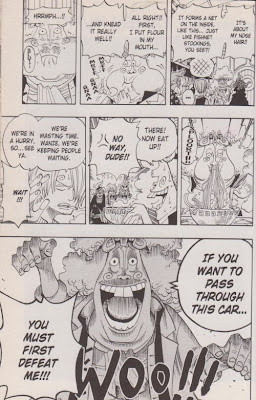 Yes, that's gross, but it's also hilarious, and it's only the beginning of his disgusting abilities: 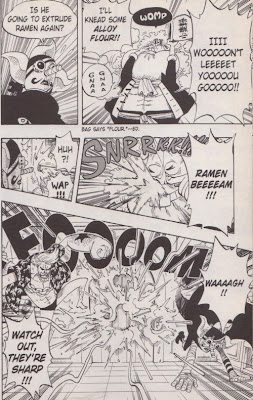 By the time he's making a suit of armor composed of ramen, he's just another wacky goofball among all the others that populate this crazy ocean. I love how Oda takes so many concepts and incorporates them into his skewed take on high-seas adventure, and this is just the latest example. I'm sure there will be many, many more to come.
Posted by Unknown at 6:00 PM