One Piece Is Awesome, Example #48

If one were so inclined, an argument could be mounted against the basic premise of Eiichiro Oda's One Piece, in that its main character's goal is to become "king of the pirates", but he doesn't seem all that interested in the typical pirate activities of looting and plundering. He and his pals do seem to enjoy sailing the seas, drinking grog, and having adventures, but they end up as outlaws more by accident than through purposeful acts of piracy. Over the course of their adventures, they've ended up in opposition to the powers that be, making them wanted criminals, but that's not really Luffy's goal; he just ends up embroiled in high-stakes battles out of a sense of honor and loyalty, rather than any big plans to oppose the corrupt forces of totalitarian control. In volume 52, there's a moment in volume 52 that kind of snaps him and his philosophy into focus, coming when a crewmate of the previous pirate king, Gold Roger, asks him if he's up for facing the dangers to come: 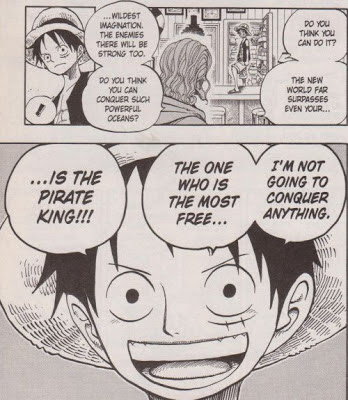 That's actually a pretty important, character-defining moment, revealing that Luffy isn't like the other pirates. He's not out to acquire loot or subjugate his enemies, he's a liberator. He's a pirate in the sense that he stands up against the forces of control and oppression, and this puts him in direct conflict with the government and anybody else who wants to rule the world. Seeing him define himself is thrilling, just another moment that gets us on board for his further adventures, ready to cheer when he fights for the defenseless and refuses to back down against those who think they deserve power over others. It's inspiring stuff; I can't wait to see more, always more.
Posted by Unknown at 12:00 PM