It's the duty of any nerdy/geeky person to do their best to impart their passions to their offspring, so since Sunday is kids' day at C2E2, I brought along my five-year-old daughter Magnolia, and we had a great time. There was plenty to do for all ages, and whether we were participating in specifically kid-focused activities or taking in comics-related sights that we could both enjoy, we had a great time.

First up was Ben's Bubble Show, a fun display of soapy virtuosity from a professional entertainer who found all manner of neat stuff to do with his medium of choice, blowing bubbles of all different sizes with various implements (but mostly his own hands), creating cool chains and structures of bubbles, and even bringing kids up on stage to envelop them in huge soapy spheres. It was tons of fun to watch, and even though Maggie isn't the type of kid to join the throng of kids near the edge of the stage and leap around frantically, trying to pop any bubbles that floated over their heads, she loved watching the ones who did.

The kids' costume parade was scheduled to appear onstage after the bubble show, but we decided to move on to see what else could be found, so we headed over to Artist's Alley. Maggie was interested in getting people to draw her some pictures, and she wasn't disappointed; several artists drew her subject of choice: princesses. She got some wonderful drawings from Chris Samnee, Jill Thompson, Amy Reeder, Amy Mebberson, Jeremy Bastian, Denver Brubaker, and Sean Dove, and she even asked Geof Darrow to draw a doggie for her little sister. Everyone was incredibly friendly and happy to contribute to her growing appreciation for the art form; nobody wants to disappoint a cute little girl. We also picked up a few children's books, which she found even more engrossing than the artists themselves: 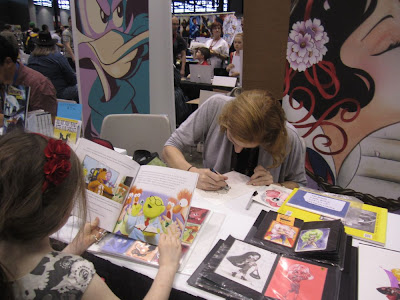 We did catch the end of the costume parade, and we both loved seeing all the cute outfits the kids sported, ranging from toddlers dressed as Wonder Woman to fantastic homemade robots, Transformers, and Martians:

We also stopped by the game room, which contained a huge library of tabletop games that people could check out and play, and we ended up spending a great deal of time playing the physical Angry Birds game, in which one player sets up structures and the other launches bird figures with a catapult to try to knock them down. It was a lot of fun, just one example of the many activities to participate in: At the end of the day, we took the train home, and it was obvious that my goal of creating a lifelong comics fan has proceeded as planned: 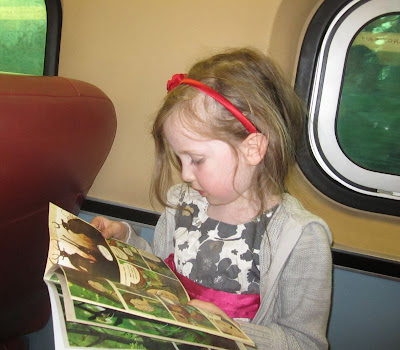 C2E2 is a great convention, whether you're there to find comics or merchandise to buy, meet creators, attend panels, or meet up with like-minded fans, and now I've found that it's a great opportunity to share your passions with your family members. I can't wait to do it again next year. It looks like we'll have material to tide us over until then: 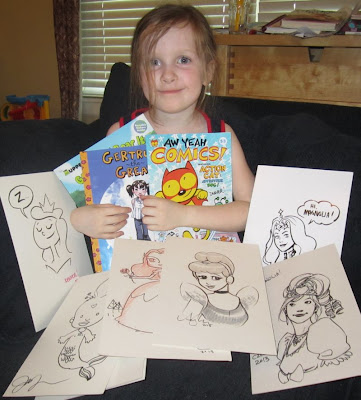