One Piece Is (Mostly) Awesome, Example #45

The Thriller Bark storyline of Eiichiro Oda's One Piece seems to be a chance to throw in all sorts of spooky stuff, like zombies, ghosts, bats, and haunted houses. Oda has a lot of fun with it, coming up with all sorts of crazy character designs consisting of different types of people and animals stitched together in Frankensteinian manner. But he's not going for straight-up horror; he'd rather make funny jokes, like this moment from volume 46 when a zombie comes up out of the ground to attack Luffy: 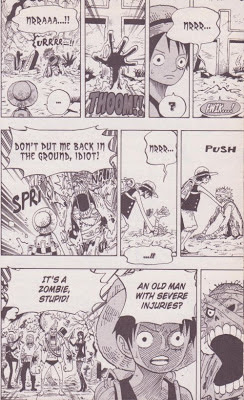 Or Luffy's reaction to another apparently undead fellow: 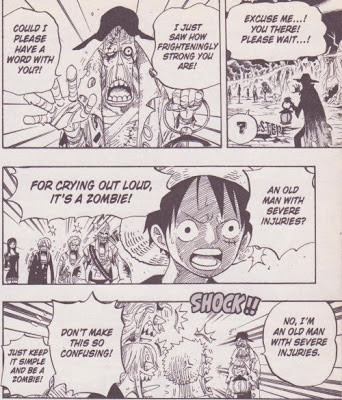 There are some horrific elements to the story, with members of the crew having their shadows (i.e. souls) stolen and used to reanimate zombies, but everything is mostly just played for laughs or the usual type of obstacle to be defeated. There was one legitimately disturbing scene though, but whether it was included as a common horror-movie trope or as the sort of thing that happens in a shonen manga, it's one of the few cases so far for which I've got to give demerits to the series. In the scene in question, Nami is taking a bath when an invisible enemy enters and assaults her: 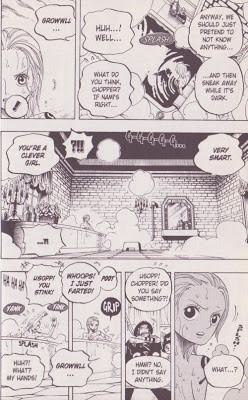 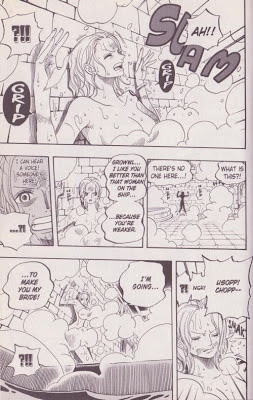 That's just not cool; there's no need for what is basically a rape threat in a kids' manga, and it's especially annoying that it reduces a strong, capable character like Nami to a damsel in distress for much of the rest of the storyline. I guess the series can't be absolutely perfect, but seeing Oda stoop to something like this is a real disappointment. Luckily, he doesn't go very far with the assault itself, and while Nami gets stuck as an unconscious, unwilling bride for too long, once she wakes up, she gets to join the action and take her place as an essential member of the crew. As long as Oda can respect his characters, he'll have me cheering for him, so hopefully this is the last time I'll have reason to complain.
Posted by Unknown at 6:00 PM