One Piece Is Awesome, Example #40

With as much cool action as Eiichiro Oda packs into One Piece, he still manages to surprise regularly, not just with new ideas and powers, but also the artistic depictions thereof. This panel, from volume 44, was one that I thought was especially cool, showing the villainous Rob Lucci using his ability to push off the air molecules and move in a zigzag pattern when attacking:

That's just such a dynamic depiction of movement that it pops right off the page. And while it's not quite as much of a departure from the usual style, I also like Luffy's retaliatory strike, in which he comes up with a new power that sees him inflate his fist to gigantic proportions and punch his opponent right out of the building: 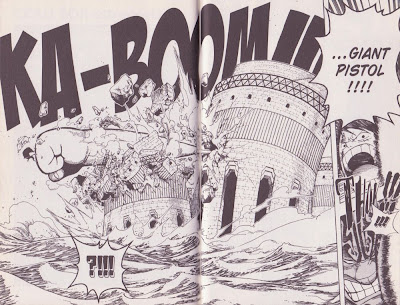 I love the crazy stuff that Oda comes up with seemingly every dozen pages or so in this series. You never know what to expect, and it's rarely less than completely awesome. More, please.
Posted by Unknown at 6:00 PM