One Piece Is Awesome, Example #38

In One Piece, Eiichiro Oda somehow keeps flexing his imaginative muscles and coming up with crazy powers for the various characters who wander into the purview of the Straw Hat Pirates, and this often presents the opportunity to portray a classic manga reaction panel, in which something wacky is happening and a character's face can be seen to the side of the panel, often freaking out at the ridiculousness of what they are seeing. Here's an example from volume 42, in which Nami is fighting Kalifa, who has the power to create soap bubbles so relaxing that they render her victims incapacitated and unable to move: 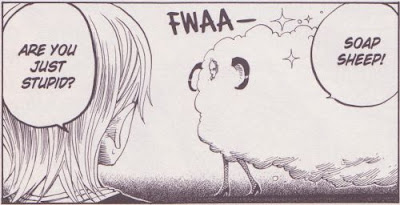 Or this moment from volume 43, where Zolo is fighting the square-nosed Kaku, who can turn himself into a giant giraffe: 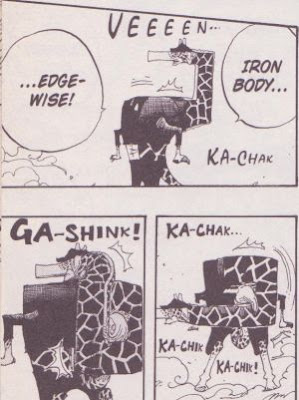 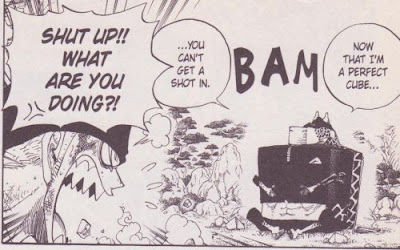 Those are both kind of hilariously dumb, but the context behind this is that both Kalifa and Kaku recently ate the Devil Fruits that gave them their powers, so they're still figuring out the extent of what they can do, and some of the moves they are workshopping end up being pretty goofy. This keeps from making their threat seem oversold, since they had been sold as rather dangerous, part of an elite group of secret assassins. They're still tough, they've just got plenty of new ways to kill you, and if some of those seem funny, well, at least you'll die laughing.
Posted by Unknown at 12:00 PM