One Piece Is Awesome, Example #52

I've mentioned this many times, but I love the goofy stuff that Eiichiro Oda comes up with in One Piece. Following the devastating defeat that Luffy suffered in the Paramount War storyline, he resolved to spend two years training to get stronger before continuing on his voyages, and he sent a message for the members of his crew, who had been scattered to various locations across the world, to do likewise. That battle was so huge that it makes for a perfect point to take a break and re-orient, and apparently Oda did just that, taking a month off (the series had been running weekly for fourteen years at this point) for a vacation and rejuvenating his imagination and creativity, then jumping forward two years in the series timeline upon his return, with the characters newly strengthened and prepared for even greater adventures. But before he did that, he set up their various situations, showing what they would be doing as they trained and learned new abilities. Nami was on a sky island, learning all about how to control the weather; Zolo was training under Dracule Mihawk, the world's greatest swordsman; and so on. But the one that especially tickles me is Sanji, who was stuck Kamabakka, the land of drag queens (ruled by Emporio Ivankov, of course). He learns about "attack cooking" and resolves to study under the 99 masters of New Kama Karate: 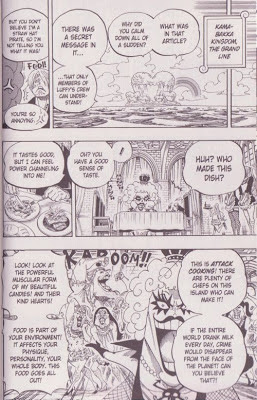 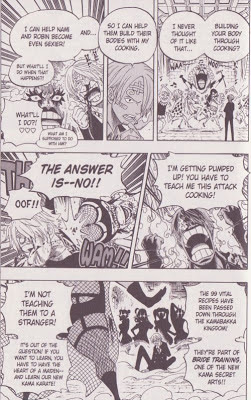 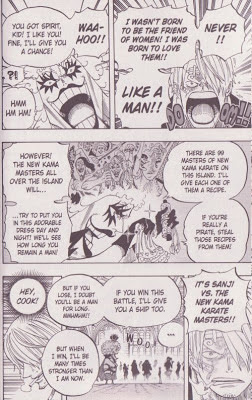 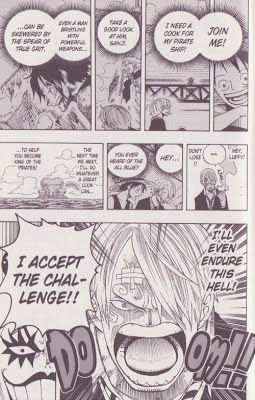 That just cracks me up; it's a hilarious example of Oda coming up with something that's weird and funny and awesome all at the same time. I can't wait to see how he and all the other characters have grown and changed in the two years they were gone, and I expect it will give Oda fuel for many, many stories to come.
Posted by Unknown at 6:00 PM