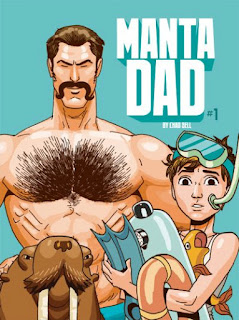 Chad Sell's Manta-Man webcomic is a fun goof on superheroes, starring a guy with the semi-useless power of being able to turn into a flying manta ray, and following his adventures as he gets involved with ninjas, monsters, homophobic closet-case rivals, and his supervillain girlfriend who constantly picks fights with him as a form of foreplay. It seems like a fun lark for Sell, allowing him to throw whatever crazy ideas he has onto the page/screen, but as the series has progressed, he has built up an interesting world full of crazy concepts and well-drawn relationships between the characters. And now, with the spinoff/flashback series Manta Dad, he's developing things further, going back to detail the early years of Manta-Man, as he accompanies his Freddie Mercury-like oceanographer father on a sea voyage that involves as much, er, canoodling with his beefcakey documentary crew as it does actual filming of weird sea life. When the kid's shapeshifting abilities are revealed to his father, the two of them end up bonding in a surprisingly touching manner, although the time Manta Dad spends with his son ends up causing some jealousy issues with the rest of the crew, setting the stage for more conflict in future issues. The extra space that a full issue provides (as opposed to the one-strip-at-a-time pace of a webcomic) lets Sell play out the story at a nice pace, resulting in a wonderful slice of nicely-illustrated character work that also includes plenty of snappy dialogue and cool creatures like shadow sharks and robo-whales. Sell is a fairly new talent on the comics scene, but this comic demonstrates that he's improving his skill at an impressive pace, and I'm excited to watch and see as he continues to create quality work.
----- 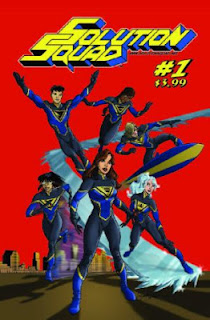 It seems mean to complain about a well-meaning comic like this, which stars a team of superheroes who fight crime using math-based powers with the intent of educating the (presumably youthful) reader, but it's just so darn square. The characters and their designs are incredibly generic, the plot is a goofy bit of fluff involving a villain robbing a museum and capturing the heroes in an easily-escapable death trap, and the story is structured in the least imaginative way possible, with an especially hokey introduction to all the characters via a two-page spread that consists of images of each person surrounded by lengthy captions that explain everyone's names, powers, and relationships (a scene which seems especially superfluous given the Official Handbook of the Marvel Universe-style profile pages in the back of the issue that provide every possible detail you would ever need to know about each character). That said, it's hard to fault the comic too much, because whatever its shortcomings, it's really sincere, seeming to meet its goal of providing a reasonably entertaining story that educates about simple mathematical concepts (this issue's being the prime number sieve). The art is clean and crisp, and while the characters are generic, there's still an effort made to create a racially-diverse team made up of people that are more than just names and basic traits (the time-traveling "cool guy" from 1984 is a nice touch, providing catch-phrases and attitude but having a reason for seeming kind of dorky). It's probably not going to set the world on fire, but as a cute educational concept, it might be something that kids could be interested in. That's something, right?
----- 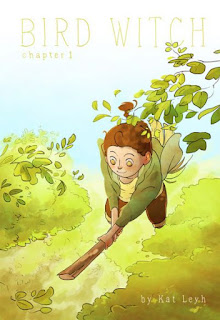 Well this is just charming. It's an all-ages comic about a young girl witch who, while exploring an enchanted forest, makes friends with a tengu, and the two of them cavort around the woods, racing and exploring and showing off their respective magical powers. Kat Leyh's art is gorgeous, consisting of deceptively simple linework and lush colors that really make the setting come to life. As a first chapter, it's wonderful, an enthralling chance to get to know some cute characters as they begin their friendship, with some ominous hints about the magical dangers they might face providing the impetus to seek out future chapters. It's a lovely little book, enough to make Leyh a talent to watch closely. I'll be sure to pick up the other available issues in the series the first chance I get.
----- 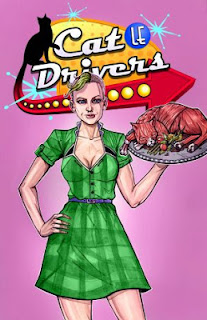 Whether you're perusing the selection in a comics convention Artist Alley or clicking randomly through some of the thousands of webcomics, you're bound to come across something like this, a comic that's trying to be offensive and edgy, but isn't really all that different from its peers. Kevin D. Bandt's big inspiration for grossing people out here is to center his comic around the idea of eating cat meat (although it's tempered by said meat coming from genetically-modified felines in a future where beef is scarce), which is probably supposed to be horrifying, but it's just about the only unique aspect of his post-apocalyptic story, and everything that surrounds it is highly generic, from people having to cross a wasteland ruled by bandits and vampires, to "badass" heroes with an attitude, to gross villains who swear a lot (using bleeped-out symbols, of course) and sexually harass treat female underlings. The story itself is put together kind of amateurishly as well, beginning with a caption reading "Yesterday" without ever specifying when "today" is supposed to take place, and having characters state their motivation outright (a character suddenly announcing that she used to have a drub problem is especially egregious). Even the title itself is a tortured bit of wordplay, the term "Cat-LE" meant to be pronounced like "cattle" with the "LE" standing for "Luxury Edition". The black-and-white art in the free version of the comic is a bit muddy, but the color pages which can be seen online do look much better, and while the artwork is nothing special, there are occasional panels with some pretty good character art and expressions. Bandt does seem passionate about what he's doing, including an editorial about how the documentary PressPausePlay inspired him to put out a free version of the comic in order to get his ideas out to people, so it's commendable that he's trying to be creative, but he's got a ways to go before he can rise above the massive cluster of mediocrity that is all to easy to get lost in. Here's hoping he doesn't quit before he gets there.
----- 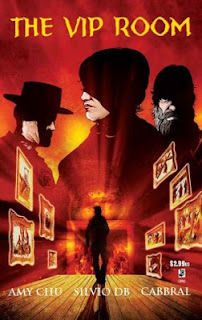 This is an interesting little story about three seemingly-unrelated characters who suddenly appear in a dining room, unsure how they got there or what they are supposed to do next. Is this some version of the afterlife? What is their connection, and is there any way to escape? As they converse, they slowly learn enough details about each other to figure out at least a little bit about what is going on, eventually leading to a Twilight Zone-ish reveal that makes for a fairly satisfying ending. It's kind of slight, but it's a neat little riff on the sort of mysterious, possibly supernatural morality tale that that show made famous, and the moody artwork gives it some nice atmosphere. I could do without the one-page epilogue that goes over the top with the premise, almost turning it into a bit of wish-fulfillment comeuppance highly recognizable villain, but overall, it's not a bad little comic.
Posted by Unknown at 3:00 PM