One Piece Is Awesome, Example #55

Here's something interesting: Eiichiro Oda breaking the 180-degree rule in the 64th volume of One Piece: 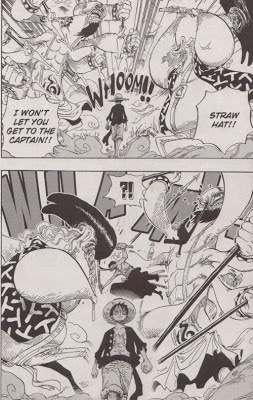 That rule doesn't always apply to comics, and Oda kind of demonstrates why here; there's no confusion as to what is going on, even when all the characters are mirrored in the transition between panels. But really, it's the most dramatic way to depict what's happening; having Luffy continue in the same pose between panels, or even with a slight variation in viewing angle wouldn't be nearly as effective; instead, we get a transition from seeing his almost casual posture to a view of the determination on his face. And while the appearance of Zolo and Sanji to defend him would be sudden at any angle, this reversal really makes it seem like they're leaping in from out of nowhere. It all works beautifully as a single page in the middle of a chaotic battle scene, just one tiny example of how great Oda is at what he does. More, please.
Posted by Unknown at 6:00 PM