One Piece Is Awesome, Example #57

Having read up through volume 67 of Eiichiro Oda's One Piece, I've caught up with the currently-available English-language volumes of the series in print, I'm in the new-to-me position of having to wait for more of the series. Up until now, there's always been more to read, and the series is so propulsive, it's easy to just pick up the next volume and keep plowing forward. I'll have to see how well it reads with a wait of a few months in between volumes, and how satisfying a single volume is as one chunk of story.

In the meantime, I've got some other options of stuff to check out in the One Piece universe, such as the anime, which is available in its entirety online (with the latest episodes even farther along in the story than volume 67; I didn't realize that they've become near-simultaneous). I'm also interested in some of the animated movies, especially Strong World, which was written by Eiichiro Oda. And exploring the vast amount of information available on the One Piece Wiki is another option for satisfying my fix; I had been looking stuff up occasionally out of curiosity, but I often found I had to stop reading to keep from spoiling myself on material I hadn't read yet. But now I can read away, learning all the details about the characters and locales of the series.

Before putting these posts on hold (unless I think of other stuff to write about, since this manga has apparently occupied a significant part of my brain), I'll note a couple of heretofore unmentioned aspects of the series that I find remarkable. For one, I'm regularly weirded out by Oda's playful sense of scale. Characters can range from five feet to well over ten feet tall, and certain species like mermaids and giants can be even taller and more massive. Since he draws a lot of crowd scenes, one suspects that he started doing this for the sake of variety, to keep from drawing dozens of people who all look similar, but he ran with the idea, and soon enough, encountering people of all shapes and sizes became commonplace. Here's the latest example, from volume 67, in which the Straw Hats are fleeing through a scientific research facility and encounter a room full of children: 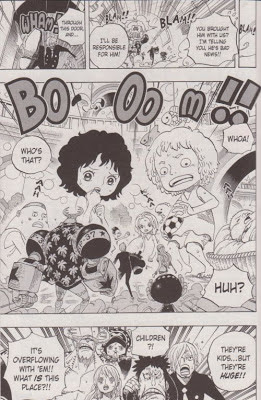 Oda doesn't just arbitrarily assign sizes to his characters though; he keeps their scale consistent, sometimes making them larger so they seem like more of a threat (one that may or may not still be easily defeated by our heroes and their ever-increasing strength), or treating them as gentle giants, or just acting like it's no big deal that they tower over everyone else. It's a weird choice, but it's one of those things that Oda does that makes the series unique.

The other thing that I find striking about the series is the level of violence. For a comic aimed at kids, it's often surprisingly bloody, but even though characters often get shot, stabbed, impaled, or beaten with such force that their heads and/or bodies are distorted beyond recognition, the level of violence doesn't seem gratuitous. It's not something grafted on to the story to make it seem more "adult" or "edgy"; it's just something that's inherent to the genre, and it usually ends up being a sign of high stakes, with our heroes facing real, physical danger. It helps that nobody seems to actually die, no matter how badly they are beaten or how grievous their injuries are. Here's a case in point from volume 67: 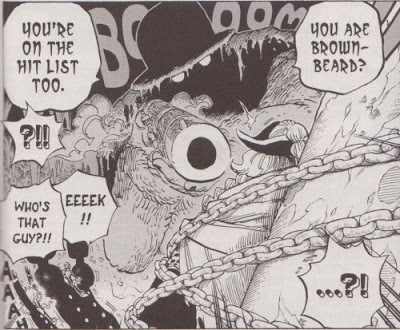 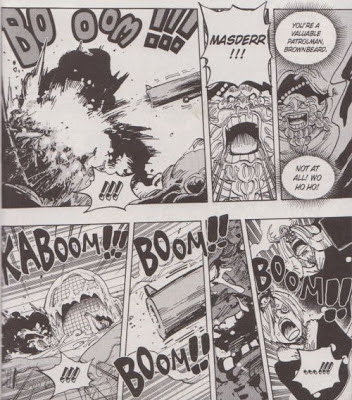 That's kind of horrifying; it works to establish the villains as a real threat, utterly lacking in morals and willing to blow away even somebody who is completely helpless. However, judging by the preview image for the next volume, even a guy who was repeatedly shot in the face can survive in this series, and that sort of thing leavens the sense of danger. The violence can be shocking and disturbing, but it's part of the story; it's not just senseless death thrown in for the sake of impact. There's always some thought behind what Oda is doing, and I trust him to use what he's got to tell the stories he's ready to tell. He's consistently amazing, and even if I'm going to be consuming the series differently from now on, I'm ready to read it for years to come. He's made a fan for life, methinks.
Posted by Unknown at 1:31 PM