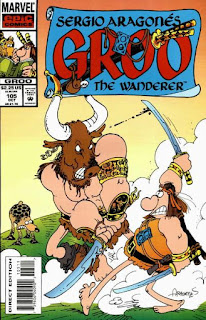 With this issue, the Groo Crew seems to have hit their stride, finding the perfect way to handle Groo's adventures now that he is slightly smarter, with him seeking to help people out and actually using his brain a little bit, while still being impulsive and destructive and managing to screw things up for the most part. It starts when Groo comes across a guy who has an animal's head, and he learns of a labor camp where all the prisoners have been forced to take an elixir that gives them animal heads, preventing them from escaping. Groo sets out to liberate them, but first he has to come up with a disguise that will allow him to infiltrate the camp: 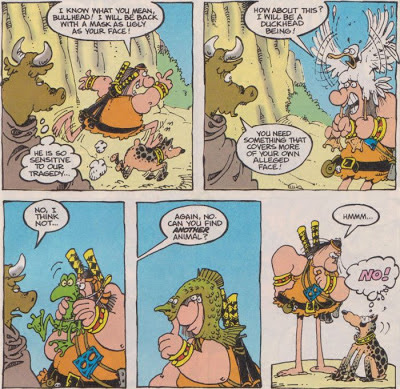 He eventually settles on wearing a pig's carcass over his head, which is rather gross. Once in the camp, Groo gets up to other various antics, such as trying to come up with a secondary disguise: 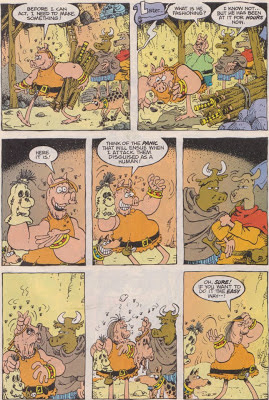 But when he eventually succeeds in freeing the slaves, it turns out they were being held there for a good reason, giving us a classic Groo ending where he seems to have succeeded, only to find out he screwed things up even worse without realizing it. The fun thing about the story is seeing Groo actually come up with plans and use his "smarts" to try to accomplish his goal. He also is beginning to learn from his mistakes, as we see in this moment when he tries to find the elixir which will cure the slaves from their beast-headedness: 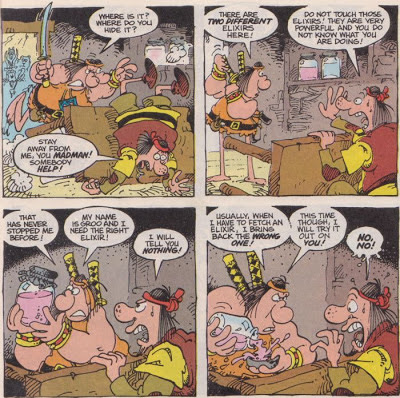 It ends up being a really fun story, a near-ideal use of Groo's current status quo to tell a classic Groo story with a new wrinkle. This is pretty great stuff.

I also really like the Sage backup story for this issue, in which he comes across some kids who are lazing around with nothing to do, so he suggests they race some horses around a lake. Returning to the area a few months later, he finds that the town's adults have taken over the horse races, turning them into big business and muscling the kids out. So Sage teaches them a new game, one that seems suspiciously familiar to modern eyes, only to return later and find out that the same thing has happened again: 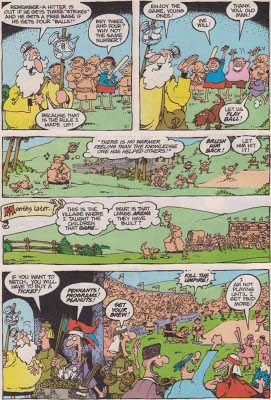 He resolves to teach them something the adults cannot co-opt, so he shows them how to play Capture the Flag, and upon his return, well, you can probably figure out the results, but Sergio and company still make it rather amusing, while making a nice point about the ridiculousness of adults taking childish pursuits so seriously. This is classic stuff for Groo, a perfect use of the Sage character for his own little stories. I wasn't sure how well this stretch of the series was going to hold up, but it looks like I needn't have worried; it's turning out to be as good as I could hope for.


Next: Since I'm missing the next few issues, I think it's time for "The Life of Groo".
-----
This issue's stats:
Recurring characters: The Sage has what seems to have become a regular backup strip, and Chakaal is featured in the Groo-Grams header:

Also, a story full of people with animal heads makes for the perfect opportunity to feature an Usagi Yojimbo cameo: 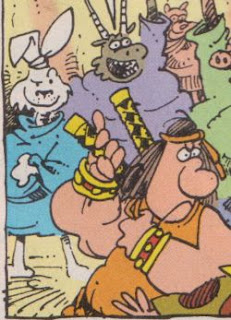 Moral: "There are two sides to every cause. Do not join one until you know the other." And for the Sage: "The older a man is, the greater the stakes in his games!"

Spanish words: The mines of Criaturas are named after the word for "creatures". Sergio says "amigos" ("friends") and "adios" ("goodbye").
Running jokes: Groo imagines that the slaves' terrible conditions include rationed cheese dip. Groo updates one of his catchphrases to "You take me for the fool I used to be and occasionally still am!"
Intro follies: Sergio tries to spell out the issue's welcome message in fireworks, and is, surprisingly, mostly successful: 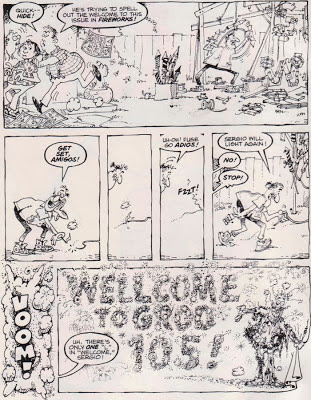 Note also that Stan Sakai is wearing a shirt covered with Usagi Yojimbos.
Value-added: Another fun maze this month: 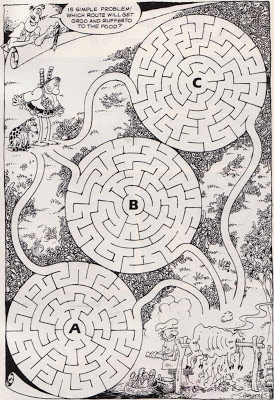 Mark Evanier's job(s): Lector ("lecturer")
Letter column jokes: Keith McCafferty congratulates the Groo Crew on 100 issues and says he's impressed that they don't just beat a dead horse month after month. Mark says they've received suggestions that doing so would be funnier than what they do print. Keith also notes that he doesn't know Brent Anderson, and Mark says he's a lot like Groo, but doesn't draw as well. Thor Newman wonders why, according to the credits in each issue, Groo has three editors. Mark isn't sure, but he thinks there's a rule about one editor for every ten readers. Jonah David Weiland (is that this Jonah Weiland?) sends in a list of things that are cool (Groo, Rufferto, getting six back issues of Groo at a convention for $2, the movie Night on Earth, The Life of Groo coming out soon, the L.A. Clippers) and not cool (The Life of Groo being delayed, the Clippers not doing well, the wacko in Waco, people writing to demand that their letter be printed (which he does, in a P.S.)). Mark replies by listing some other things that aren't cool, including "people telling us what's cool and what's not" and "having your letter printed in Groo-Grams". Elisa Blanquez says her life has been ruined by reading Groo, and as proof she notes that she named her three kittens Rufferto, Mulch, and Rufferto II; she doesn't date anymore because nobody lives up to the "virile and handsome" standards of Groo; and she finds herself plotting to murder Chakaal. She asks Mark to arrange for a date with Groo, and asks him to be their best man. Mark refuses, saying that the last time he went to a comic book wedding, he caught the bouquet and got stuck with this job. He can't imagine what the next step down would be, but when Al Weinberg  writes to say that Mark should be "King of all Comic Books, ruler of all companies, getting credit for everything good in comics today and blaming everything bad on people who won't do exactly what you tell him to do", Mark thinks Al has figured it out. Frederick Schweig writes that he realized how incongruous Rufferto's articulate thoughts are in "this otherwise highly realistic comic", so now that Groo is somewhat intelligent, he demands they make Rufferto comparably stupid. John Bunco notes that with 100 issues, Groo has outlasted all but four non-funny animal humor comics (Police Comics starring Plastic Man, Bob Hope, Jerry Lewis, and Millie the Model), and around the year 2000, it will be the longest-running of them all. But then he remembers Archie, so he realizes Groo #100 was of no significance at all, and apologizes for wasting everybody's time. T. Newman wonders what Groo did in a previous life to merit being reincarnated as Groo, and also what he could possibly end up as in the next life that's even worse. Mark says he may come back as a Groo reader.