The Neverending Fray: Rufferto is too insecure 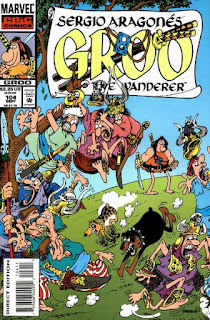 Rufferto-centric stories are often nice, but it seems like they tend to go over the same territory repeatedly, with our favorite canine becoming worried that Groo is going to replace him in his affections with some other animal. I end up irritated at him and wanting him to just realize that Groo looooooves him, so quit being so touchy. However, it's easy to forget that even though we're privy to his thoughts, he's still a dog, and he follows the typical doggy behavior of craving constant affection from his master, fixating on what happened to him when he's absent, and overflowing with happiness every time they are reunited. Rufferto might seem smart (especially compared to Groo), but he's still an animal, and sometimes we need a reminder of that.

So, with fellow dog Oso sticking around after the last issue, Rufferto is worried that he's being replaced, so he sets out to find a home for him. They go through several amusing scenarios, including a house full of children who abuse him mercilessly and a circus that wants to dress him up like a clown, before he earns a position as a guard dog, leading to a classic Grooish ending in which he refuses to let anybody enter the building he is guarding, whether they are supposed to get past him or not. It's a decent enough tale, highlighting the relationship between Groo and Rufferto and reiterating that nobody will ever come between them.

There's an interesting bit in the middle of the story in which Rufferto sort of relates his origin story to Oso, describing how, as a royal dog, he was constantly pampered, but when he got a glimpse of the way the common people lived, he grew ashamed at the luxuries he was granted when there was so much suffering going on outside his door. It's an interesting aside, making for a good demonstration of why he gets along with Groo so well, and it also fits in with Groo's burgeoning sense of social justice. 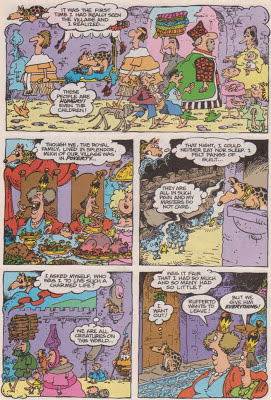 It's not a bad issue, although it's kind of light on the jokes. I did like this gag though, even though I'm often not especially enamored of jokes about Groo not being able to count:

I also found the Sage backup story pretty amusing; upon encountering a town full of workers who are being exploited by their bosses, he urges them to strike, leading to a funny misunderstanding and a great example of the sheer chaos that Sergio does so well: 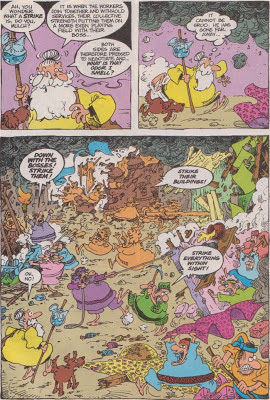 At this point in the series, I'm wondering if the Groo Crew is slightly past their prime; the stories are still enjoyable enough, but they're not quite as packed full of gags as they used to be, and the focus seems to be more on the plots, which may or may not lead to good jokes. It seems like they're still trying to get a handle on the new direction that came with Groo's increased intelligence, so we'll see if they can manage to find a balance of funny stuff, character work, interesting stories, and good artwork. But even if the series is in a decline from here on out, I'm happy to keep reading it. I can never get enough Groo.


Next: "The Curse of Criaturas"
-----
This issue's stats:
Recurring characters: Oso, and Rufferto's former owners show up in a flashback, plus the Sage has a backup strip.
Moral: "One lesson learned is never enough." And for the Sage backup story: "No one ever fixed a broken system by destroying it."

Spanish words: Sergio says "mucho", which means "much".
Running jokes: Oso still wants to tear everything apart. A new running joke seems to be forming in which Groo makes sure prospective employers know he can read, whether it is relevant or not.
Intro follies: Inspired by Groo learning to read, Sergio brushes up on his English and decides to read the letter columns from Groo back issues: 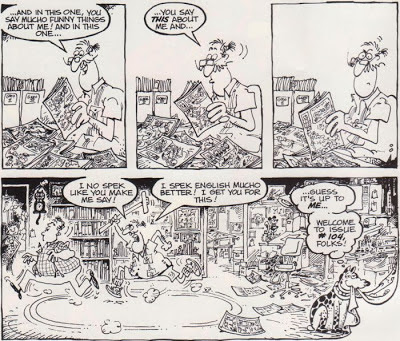 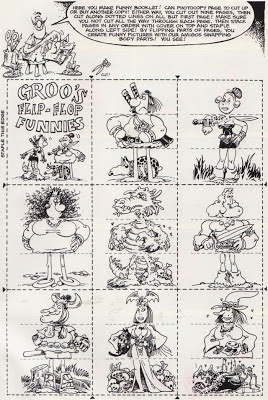 Mark Evanier's job(s): Realtor
Letter column jokes: This month mostly features semi-serious letters, many of which congratulate the Groo Crew on getting to 100 issues, but there are still some jokes. David Schuldt compliments Mark and company on coming up with a new joke in issue #100. Mark says expecting a new joke out of them is ridiculous, and next people will start expecting the stories to make sense. Carter Himes asks if Groo considers himself a samurai or a barbarian. Mark says he just considers himself Groo, but the Groo Crew considers him Sergio's rent, Stan Sakai's part-time job, Tom Luth's life work, and Mark's role model, which means something is terribly wrong with their value system. David Zackin writes to Bob Smith asking how his family is because he's a lot more interesting than Mark. Mark says "Ha! Let's see if Bob Smith will print your letter!" Somebody calling himself "The Marshmallow Dragon" says he shoved a stack of Groo comics into his Nintendo in an attempt to create a Groo video game, but now they're stuck inside and when he turns it on, it just flashes the word "Zigfried" on the screen. Mark suggests he take up checkers. Brad Griffin asks if the warrior chicks that often show up in the bottom corner of the comic's title pages are modeled after the Barbi twins. Mark can't think of a funny answer, so he suggests readers send some in. I'm looking forward to seeing if this becomes a new running gag.