Fables: The Good Prince: I think he's true good, rather than chaotic good

Ah, hell, I don't even know what I'm talking about. Sorry, nerds. Anyway, before I get to the review, I'll point out that I also have a review of Kaput and Zösky up over at Comics Bulletin. Check it out (the book that is, even if you don't care about what I wrote about it). And now: 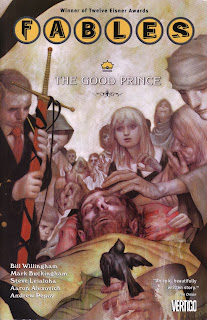 I'm probably not the most impartial of critics when it comes to this series, since I absolutely adore every new volume that I read. But that's because I feel like I know and care about the characters, and I want to find out what happens to them in each new installment. That's gotta indicate some sort of quality, doesn't it? Or maybe Bill Willingham has just figured out the secret formula to keep fans in perpetual anticipation for the next revelation. Whatever the case, I found this to be an immensely satisfying volume, living up to and even surpassing my expectations.

I had been dreading reading this story, since I was certain its main character, Flycatcher (a.k.a. Prince Ambrose, a.k.a. the frog prince), was going to meet a tragic end. He was such a sad fellow, having been deepened from the comic-relief character that he started out as in the beginning of the series. But as the series went on, we slowly learned his backstory (Willingham credits Mark Buckingham for pushing him to do more with the character in his dedication), finding that he had witnessed the brutal murder of his family and gone somewhat insane, repressing the terrible memories. But a moment of clarity brought him new focus, and as this volume begins, he is both suicidal and somehow hopeful that he can redeem himself and regain something of what he has lost.

And thus begins an incredible journey and maturation, as he manages to build a new kingdom in the Homelands, gather a huge community of refugees, and defeat every obstacle the Adversary throws at him. It's powerful stuff, and a fascinating development in the world of the series. Up until now, the small band of Fables in the "real world" seemed hopelessly outmatched by their evil enemies, but this shifts the balance of power in unexpected ways. But it still remains something of a wild card, since Ambrose refuses to allow his kingdom to be used as a military base for conquest.

In fact, that's another fascinating bit of the story, since Ambrose manages to actually accomplish his goals in a nonviolent fashion, refusing to kill his enemies and even accepting them as citizens of his kingdom when they flee from the Adversary's armies in the face of execution. It's not the sort of action that you usually see in fantasy stories, and it's a surprising choice by Willingham, who gained something of a reputation as a political conservative after a character's pro-Israel monologue in a previous volume.

The art, as usual, is excellent. Mark Buckingham has really hit a groove in this series, totally nailing both the beautifully fantastical locales and the mundane countrysides and cityscapes. And while I somehow missed this previously, he has a real Jack Kirby influence in a lot of his work. Check out the Kirby dots, radiant energy, and Kirby-like squiggles and shadows on the armor in this scene: 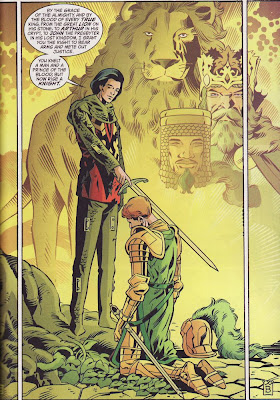 And this image is full of the jump-out-of-the-page energy that Kirby used to do so well: 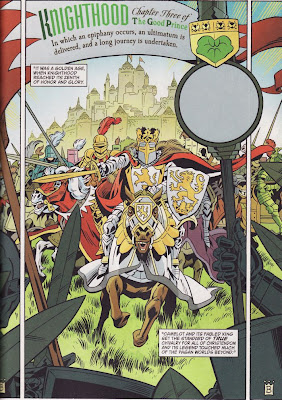 But Buckingham also does a great job with the quieter moments of conversation and contemplation, adding volumes of meaning to scenes through facial expressions and posture. Early on, a bearded Flycatcher looks so sad and forlorn, it's just heartbreaking: 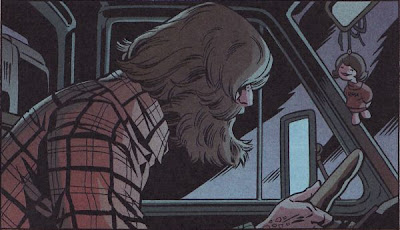 But his appearance later in the story stands in marked contrast. With all the confidence and assertiveness he's gained, it's almost hard to believe he's the same character: 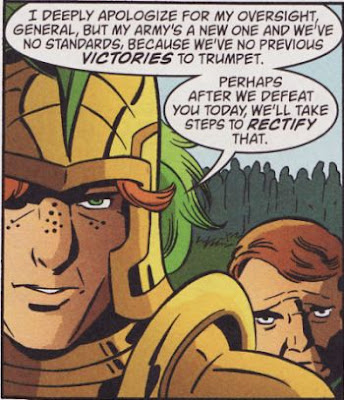 But not too difficult, thanks to Buckingham. It's beautiful work, as is the occasional recreation of James Jean's cover images within the pages of the story: 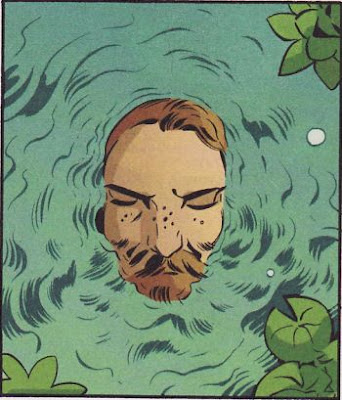 I don't think Buckingham had been doing this before, but I noticed it several times here. It makes for a nice touch, since Jean's covers are one of the most striking elements of the series.

There is one minor wrinkle in the artwork, and that's an interstitial chapter illustrated by Aaron Alexovich (who also drew the Minx books Confessions of a Blabbermouth and Kimmie66). Alexovich isn't a bad artist, but I don't think is cartoony style is a very good fit for the series. It's nothing terrible though, and his chapter focuses on the Wolf cubs, who take to a cute depiction pretty well: 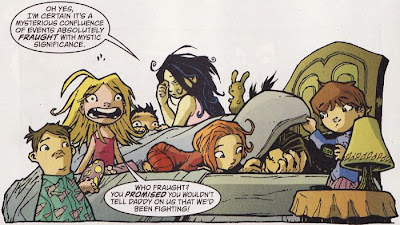 Bigby Wolf, Boy Blue, and Rose Red? Not so much: 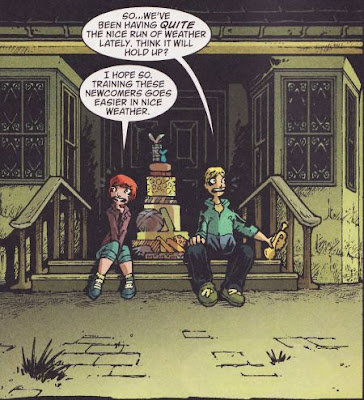 But that's a pretty minor complaint, and if it's the only thing I have to whine about, I'm pretty happy. And as I mentioned, the story doesn't end as tragically as I had expected, which was a relief (did I mention that I might be too emotionally attached to these characters?). And there are some really interesting hints as to what is to come, especially those involving Frau Totenkinder, the reformed witch who always seems to be several steps ahead of everyone else. It's a great series, and a wonderful world to get lost in. I can't wait for the next volume, which should only be nine months away or so...
Posted by Unknown at 8:14 PM