Queen and Country: Now I understand the hubbub

Over at Comics Bulletin, I've got a review of Squadron Supreme 2 #1, as part of a group review. It's not all that good, but who knows, it could get better. I don't know if the ugly Greg Land cover will entice anybody to look inside though. Anyway: 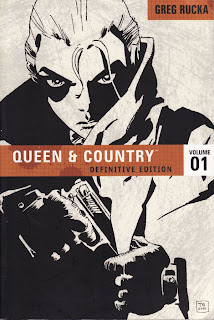 Now that I've read this first collection of Greg Rucka's much-lauded espionage series, I understand why it gets so much praise. It's excellent stuff, looking at the world of modern spies in a very realistic manner, and focusing on character and the toll their jobs take on them, in addition to the action and intrigue of combating terrorism across the globe.

Originally starting in 2001, the series took an episodic approach, with storylines stretching across three to five issues at a time, and a different artist illustrating each one. The first storyline, drawn by Steve Rolston (The Escapists), kicked things off in an exciting and intriguing manner, introducing us to British SIS (Secret Intelligence Service, a.k.a. MI6) agent Tara Chace as she is about to assassinate an arms-dealing former Russian general in Kosovo. Her actions lead to an exciting chase throughout the countryside, as she tries to reach an extraction point and get back home. Meanwhile, back home, Paul Crocker, the Director of Operations, coordinates things and arranges resources for her. It's tense and thrilling, and it's only the first issue, showing what sort of story is to be expected from the series.

But then, after that issue is over, Rucka takes things a step further, showing the consequences of the mission. A short story that was originally printed in Oni Color Special 2001 (featuring nice art by Stan Sakai) shows how the general's colleagues manage to find out who killed him and track Tara back to British Intelligence, and then the Russian mafia retaliates against SIS and puts a bounty of one million dollars on Tara's head. It's a fascinating turn for the story, and it demonstrates how Rucka is examining all aspects of modern espionage, rather than focusing solely on the sexy assassinations and shootouts. It's still exciting stuff though, and while much of the story focuses on Tara's predicament (and her reaction to MI5's decision to use her as bait to draw out her bounty hunters), we also see that Crocker is as important of a character as she is. He probably gets at least as much page time as she does, as he navigates the tricky world of bureaucracy and international relations, trying to arrange as much support for his agents as possible.

Rolston's art on this first storyline sets a great tone for the series. Apparently, he was criticized for being too cartoony of an artist for such a realistically-toned series, but I think his images work perfectly. While characters' faces are often somewhat soft and rounded, he packs some really good details into the backgrounds, making diverse locations like SIS's Ops Room, war-torn Kosovo, and the streets of London all seem like real, lived-in places:

He also has a really good command of gesture and motion, making for clear, exciting action: 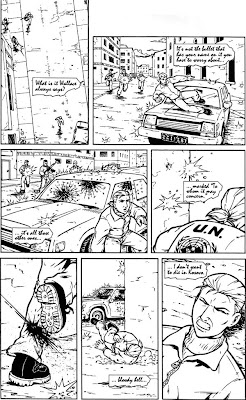 I especially like the way he draws the folds and wrinkles of clothing. And I think the way he draws so much of the book as open and clear, rather than the shadow-filled gloom of most spy stories, makes for a unique and different feel, showing that this comic is something different and unique.

For the second storyline, Brian Hurtt (artist of Hard Time and The Damned) takes over the art duties, as we see Tara deal with the emotional fallout of the previous mission, while her fellow agents try to keep crucial information from falling into the hands of the Taliban (which, this story being written pre-9/11 when few in the U.S. paid attention to international affairs, is spelled "Taleban") in Afghanistan. It's a bold move, taking the main character off the table in the second storyline, but it makes for some compelling drama, as we see Tara work through her feelings about performing an assassination and being forced to sit out of a mission where she would be useless due to her gender. Several scenes take place between Tara and the staff psychologist, and it's as arresting and interesting as the action going on overseas.

This was Hurtt's first major work, and he really made a splash, showing how capable he is of delivering exciting and emotionally-complex work. Unlike Rolston, he uses plenty of shadows and darker backgrounds, but in a way that enhances the mood and feeling of the scenes. Check out this page of Tara drowning her sorrows in a bar: 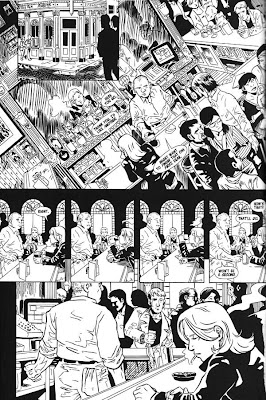 I like how that opening panel is angled to show Tara's skewed emotional state, and how the guy watching her in the background comes to the fore in the last panel; he is drawn more sharply and clearly, and his placement at the center of the panel right in between Tara and the bartender signals his importance. It's nice work by Hurtt.

Also nice is a sequence that contrasts a scene in which Tara goes home with the guy with a scene of her fellow agents coming across an atrocity in Afghanistan. It's an incredible double-page spread, and it makes for a very striking comparison, showing how Tara's emotions are as mixed-up and crazy as what is going on on the other side of the world: 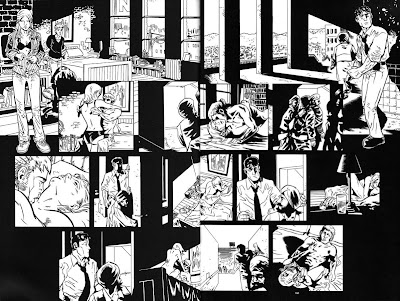 While shorter than the other stories in the volume, it's a nice breather that adds to our understanding of the characters and gets us on their side. Seeing the whole team come together to successfully complete the mission is immensely satisfying, and as in the previous story, the back-room intrigue of Crocker's dealings and arguments with the higher-ups are as tense and exciting as what is going on in the field. Nicely done.

The final story, illustrated by Leandro Fernandez (who would go on to draw some of the Garth Ennis-written Punisher stories), begins with a reaction to the events of September 11, 2001. It's nicely reserved; we simply see a scene of the Ops Room suddenly getting really busy, followed by a scene in which Tara and her fellow agents' training is interrupted to watch the news on TV. But it also seems like a turning point for the series; while international operations were an interesting subject before then, suddenly the cast is part of the "War on Terror". For Americans at least, real-world implications lend a new weight to a series of fictional stories, and I'm curious to see what else Rucka did with the opportunity.

This story definitely starts in that direction, as the team ends up racing to stop a terrorist action that could end up affecting people on a larger scale than in the previous stories. It's an interesting confluence of events, as a rogue terrorist from the E.I.J. (Egyptian Islamic Jihad) walks into the British embassy in Cairo claiming to have information about a plot that could kill thousands of British citizens. This leads to an agent having to make an unauthorized excursion into Iraq as a favor for the CIA, who will provide satellite imagery of a possible chemical weapons plant in return. And then Tara and other agents have to race to try to find whatever information they can in a desperate attempt to stop an attack that they know little about. Again, it's fascinating, tense stuff, with lots of exciting action and interpersonal drama (including a romance between Tara and another agent).

Unfortunately, Fernandez's artwork is the weakest in the book. He seems like a more exaggerated Eduardo Risso, layering on lots of high-contrast shadows and making every facial expression seem overacted. His art certainly isn't bad, and some of his designs are pretty interesting (I like his thin-faced, long-nosed, weaselly take on Crocker), but the histrionic depictions of all the characters don't seem to fit with the realism of the script. Crocker especially suffers, going from a stoically intense persuader to a grimacing, over-emotive shouter:

And Tara has suddenly morphed from a demure, serious woman into a sexy bombshell, sporting pouty lips, a tiny waist, and massive breasts: 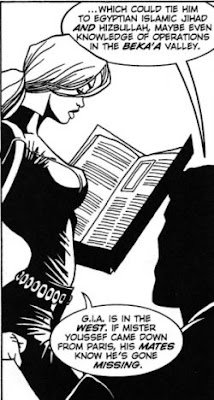 Fernandez does tone down her sexiness as the story progresses, but it's a weird start to the story; it's as if you tuned in to an episode of The Wire to find Bunk is suddenly being played by William Shatner and Amy Ryan replaced by Pamela Anderson.

There were one or two other moments that seemed off as well; in one scene, Tara and a fellow agent have a shootout with some terrorists, and as they crouch behind cover, they say there are three shooters. But then they only take out two people, with no mention that they were wrong in their assessment of the situation. Was that just a typo? The same scene sees the other agent shoot somebody while jumping through the air and wielding two pistols, John Woo style. It's the kind of action-movie moment that really doesn't fit in a realistically-toned series like this.

But even with my problems with the story, it's still a compelling, exciting read, full of moments that make you feel a deep urge to keep turning pages and reading. I can't imagine what the wait between issues must have been like, especially since this isn't a series known for a regular schedule (although maybe it came out more often back at the beginning).

So, yeah, the series is definitely everything it was described as, and more. Between the interesting settings, conflicts that seem pulled right out of the newspaper, and well-drawn characters, Rucka and company have put together something special here, and I can't wait to read more of it.

This review was based on a complimentary copy provided by the publisher.
Posted by Unknown at 11:13 PM