Station: Not the radio kind

I had a different review planned for tonight, but circumstances transpired against it getting done. Tomorrow, I guess. In the meantime, here's another (probably shorter) thing: 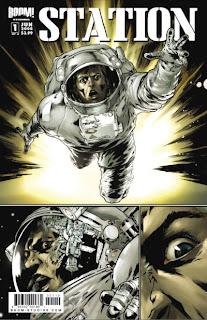 Astronauts are cool, am I right? Who didn't want to grow up to be an astronaut? I don't know if it was a product of the era of my childhood, with the space shuttle program and everything, but the idea of getting to go into space seemed like one of those cool possibilities that actually seemed achievable, if still pretty unlikely. So I've got a soft spot for realism-grounded stories about people in space (see also: Planetes and 2001 Nights).

Maybe Johanna Stokes felt the same way, because she has the makings of a really interesting story here about astronauts on the current-day International Space Station. It's full of little details about life in orbit, but it still seems to focus on plot and character. And that plot is shaping up to be pretty interesting, as tragedy strikes on a spacewalk, leading to the death of a crew member. But an odd discovery indicates that it might not have been an accident. If that's true, then there's a murderer loose among the crew, and our hero will have to find him or her out before anything else happens.

In an odd plot point, that hero, Dyson, is a "space tourist", which, unless I'm mistaken, isn't an existing program. But it makes for a useful storytelling device, since the rest of the crew has to explain everything to him, and thus to the readers. There are some other complications, including tension among the crew (some of it based on nationality; the Japanese and Italian crew members feel sidelined by the "more important" Americans and Russians), and the murder plot should prove interesting, but I think what I enjoy most is the little details, seeing the characters use the equipment and controls that cover every surface. It's a good look at what it must be like to spend all your time floating around such a small space.

Leno Carvalho does a really nice job of making everything seem real. The technology has a modern look about it that really grounds the story; rather than slick sci-fi features, everything has a real-world, lived-in feel: 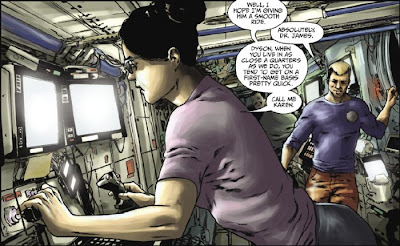 The characters are all nicely-depicted as well, with some jagged shadows that are reminiscent of Christopher Mitten's artwork, although I occasionally wondered if the best choices were made in showing them; sometimes they would be gathered in a group talking, and it looked as if they were standing on solid ground, rather than floating in zero-gravity. But it's nothing too distracting, and Carvalho puts in some other really nice details, like a toy floating outside of the panels themselves, or a moving depiction of the doomed astronaut drifting away from the station.

So, yeah, it's a pretty arresting story, and I'm quite curious as to where it's going next. If you're as interesting in space as I was, or at least remember when space travel seemed like an exotic possibility that might someday be commonplace, I would recommend checking this out. It's pretty neat.

This review was based on a complimentary copy provided by the publisher.
Posted by Unknown at 11:04 PM