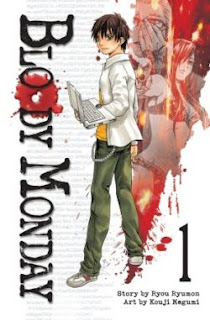 Computer hackers seem like they should be cool on principle, but seeing somebody frantically typing away at a keyboard as text scrolls across a screen or little progress bars inch toward completion is actually pretty boring, which is why movies got over their brief fling with the idea something like twelve years ago. That hasn't stopped this manga from trying to make it cool though, pitting an teenage nerd who protects the innocent through his computer skills against terrorists and creating an espionage-based conspiracy around him. Also, there is fan-service, since something has to be done to alleviate the tedium of processors at work.

That might not be completely fair, since the focus here is really on the conspiracy, which sees high school student Takagi caught up in a bioterrorism plot and a false murder accusation toward his father, a spy at a secretive interior Japanese ministry called Third-I. He gets his friends and fellow school newspaper club members involved, somehow not recognizing that their sexy new teacher is actually an evil spy intent on sabotaging his efforts, while also trying to protect his sickly younger sister and clear his father's name. Writer Ryou Ryumon seems to be going for the long game here, still introducing major players in the story by the end of this first volume, and while he comes up with some interesting threats and effective imagery (which includes an odd effect in which Takagi's eyes turn cat-like, with slitted pupils, whenever he's really getting into his computering), he also wastes a lot of time with gratuitous scenes of breasts and panties and the various flirtations and affections between Takagi and his friends. It's a weird book, hovering between violent action-adventure and juvenile goofiness. That probably just means that it's a shonen comic, typified by scenes in which Takagi does something awesome like unleashing a virus that links a peer-to-peer network of computers into a distributed processor, cracking encryption that would take a regular computer ten years in only ten minutes, prompting amazed comments from onlookers who can't believe how great he is. It's kind of silly, but entertaining in a fairly dumb way, with some surprisingly gruesome violence, and hacker techniques that seem based on real technology rather than fantastical Hollywood pseudo-technical jargon. Take that as you will.
----- 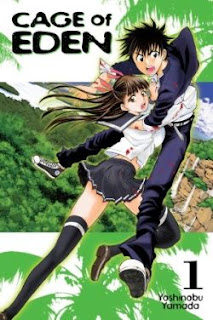 A bunch of people trying to survive on a mysterious island full of strange phenomena after a plane crash; where have I heard that one before? It looks like Lost's influence has even spread to the manga world, but this series isn't really that derivative, at least not as of this volume, focusing less on sci-fi mysteries and more on action (and fan-service), along with some stuff about societal breakdown. This plane, which was carrying a class of Japanese high school students home from a school trip to Guam, ends up on an uncharted island full of prehistoric creatures, everyone left to fend for themselves when attacked by monstrous birds, sabre-toothed tigers, and a freakish thing that looks like a gigantic cross between a wolf and an alligator. It's pretty exciting, with some cool action sequences and a compelling hook (namely, "WTF is going on?") to keep readers interested, but the characters are pretty thin, and occasionally actively obnoxious, especially the pompous brainiac and airheaded flight attendant that the protagonist initially gets saddled with. The creature designs, which are based on real prehistoric animals, are especially good, covered with neat-looking stripes, spots, and patterns, and seeming alien and threatening to the panicked survivors of a tragedy. For a diverting bit of action-movie escapism, this isn't bad at all, and if it built the characters to have more than one dimension and eased up a bit on all the leering panty shots, it could turn into something pretty good. Chances are though, it'll continue on its present course until the entire cast is either eaten or rescued, and that's fine too. We all need some junk food in our diet.
----- 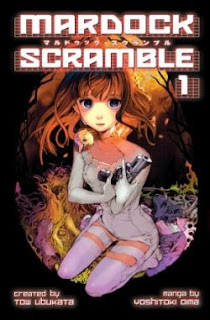 Now this is a pretty good manga, or at least one that has some some neat sci-fi ideas, character arcs, and interesting action. It follows a homeless girl who is "rescued" by a well-to-do man who, after giving her a new lease on life, promptly attempts to murder her. Luckily for her, she is rescued from a deadly explosion by a scientist who replaces her burnt skin with a synthetic substance that increases her sensory abilities, allowing her to "feel" every object around her as if everything was connected by an invisible web, and also to manipulate electrical devices through an ability kind of humorously translated as "snark". She gets recruited into a quest to stop any further murders by the man who tried to kill her, joined by a shapeshifting mouse named OEufcoque. Yes, OEufcoque, which is just one of the crazy names in the book, names that include the girl herself, Rune Balot, the murderer, Shell, and an assassin named Dimsdale Boiled. Those are my current favorite example of Japanese versions of English-language names.

Anyway, this fight against the forces of evil isn't all happy-go-lucky; Balot herself is depressive and suicidal, which makes for a change from the usual manga protagonist, but a believable one, considering what she has gone through. It's nice to see her gain some confidence as she begins to master her new abilities, and the resulting scenes of action and violence are pretty nicely done, notably a fight in which OEufcoque morphs himself into a protective bodysuit for her and helps her dodge and strike multiple attackers, making different weapons appear in her hands for the most effective ass-kicking. Yoshitoki Oima's art handles all of this really nicely, adding weird flourishes to the morphing effects and lots of dynamic angles to the fights and chases. Faces end up looking a bit off, especially on male characters, but at least Balot comes off as a believably meek and quiet victim, rather than some bodacious, top-heavy vixen. It's pretty good times all around, and a series that should definitely be one to watch as further volumes appear.
Posted by Unknown at 8:06 PM