Until the Full Moon, volume 1
By Sanami Matoh
Published by Kodansha Comics 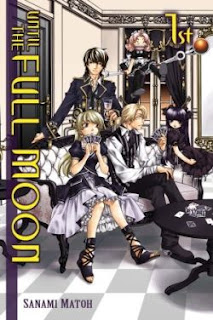 As much as this is a "Hey, vampires are hot right now, right?" type of comic, it's got some kind of fascinating gender stuff going on, such that I don't really feel qualified to discuss it, since it would be better handled by Noah Berlatsky or one of the other Hooded Utilitarians, but I'll give it a try anyway. The story involves an aristocratic vampire named David who gets engaged to his cousin Marlo (I guess that's okay for supernatural creatures; this isn't the first time I've seen it given a pass for them), who is from a werewolf family, but doesn't get all hairy at the full moon. No, Marlo is a boy, and he turns into a girl, upping the forbidden love quotient of the comic considerably. This relationship causes all kinds of turmoil, but mostly externally, with another family whose daughter had eyes on David and an old girlfriend of Marlo's insisting that the wedding be called off, even hurling the occasional anti-gay slur at the young couple. The parents are totally supportive, and David doesn't care what Marlo looks like; he loves him for who he is on the inside. Marlo has some misgivings, although he seems be slowly accepting his love for David, most of his uncomfortableness coming when he is male, since he prefers to express his love in his female form. It's all very interesting in its smashing of gender boundaries; is Marlo representative of a gay/transgender person, ashamed of his uncontrollable urges but flowering under the love of somebody who loves him for him? Is David gay or bisexual, not caring what form his lover takes? He is described by other characters as a womanizer, so his love seems to be independent of outward sexuality. How does the vampire/werewolf aspect fit in? Is it indicative of uncontrolled sexuality (vampires) and burgeoning womanhood (werewolves), or is it just zeitgeist-chasing window-dressing? What about the odd chapter which transposes the couple to an ancient woodland village, with David being a traveler who happens across a clan whose members transform into either wolves or women in the full moon, with Marlo still feeling left out, unable to become a woman until he experiences David's love? That seems to reverse the gay stigma, but still leaves Marlo feeling ashamed, unable to experience sexual maturity without the expression of another's love? Is that an attempt at alleviating criticisms about male/male love being okay as long as one of them turns into a woman by making him a person who is supposed to turn into a woman but can't? Does any of this make any sense outside of the context of being an excuse to depict lots of scenes of guys making out? 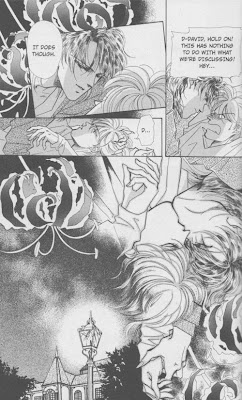 That all seems like a lot to explore, and I'm obviously left with more questions than answers, but unfortunately, the whole thing is buried under some rather atrocious artwork (not to mention the one-dimensional characters, with David rarely doing much more than repeating that he loves Marlo ad nauseam) that looks like the artist saw some Ryoichi Ikegami manga in the 70s and said, "Add some flowery backgrounds to that and I'm set; I don't care what styles gain traction in the future, this is what I'm sticking with!" This is some eye-burningly hideous stuff, full of rounded chins, wide foreheads, big shoulders, ugly clothes, and mullets and big hair galore. Characters are ridiculously inexpressive (especially David with his constant stone-faced declarations of love), except when they need to shout and turn into cartoonish caricatures in the Rumiko Takahashi style that sees them in profile with their mouths turning into wide-open gaps in space. It's an all-around horrific package, making any attempts to glean a message a real chore. 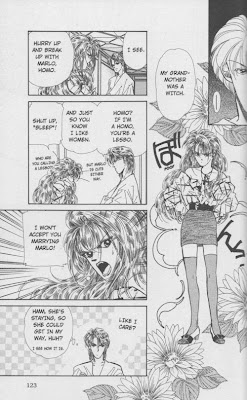 Oddly, the cover is drawn in a completely different style, masking the horrors within, and there's also a backup story drawn in that style, which is such a departure that it seems like it must be drawn by a different artist (perhaps an assistant?). Even weirder, the backup appears to feature the same characters, but in a different continuity (to use the parlance of an entirely different genre) altogether, one that sees them experience strangeness during the full moon, but of a non-gender-bending sort. Just what is going on here is confusing; it would have been nice to get some sort of behind-the-scenes explanation or something. 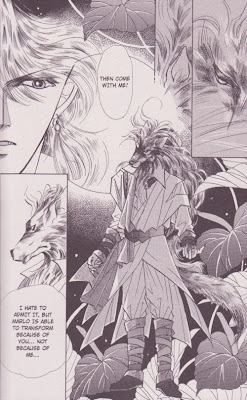 So, as interesting as the ideas behind the story are, the comic that they are wrapped in is quite the slog to experience, ugly, boring, and just plain not good. Unless you're looking to write a better essay than this and explore the gender issues with some substance instead of nattering on about not quite getting it all, don't subject yourself to this. It's really not worth it, even for the pure train-wreck factor.
Posted by Unknown at 7:00 PM