One Soul: It's like, we're all the same person, maaan

One Soul
By Ray Fawkes
Published by Oni Press 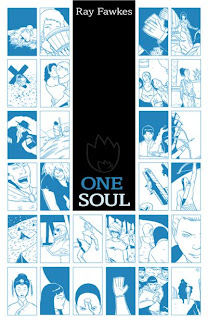 There's something about the combination of words and pictures in close proximity to imply narrative through sequentiality that makes comics ripe for formal experimentation, and it's always fascinating to see what different artists come up with when telling stories with the medium, from the seemingly simple process of conveying motion and the passage of time from panel to panel, to the complex experimentation of a Chris Ware or Richard McGuire. Ray Fawkes seems to be attempting to position himself among the latter with this book, which establishes a strict formal conceit from page one and then continues it through to the finale, managing to weave a large number of stories together and gesture toward some grand statement about life in the meantime. No matter how successful you find the result to be, you have to admit that it's a pretty virtuosic display, worth reading just to see how well Fawkes pulls it off.

That conceit? It's a doozy: the book follows eighteen characters from birth to death, with each one given a single panel on every double-page spread, allowing readers to watch as they all mature at the same rate over the course of their lives, drawing conclusions and comparisons and witnessing juxtapositions and patterns both implied and inferred. The eighteen lives are scattered throughout history, from the stone age up to the modern day (or the last few decades, at least), and each of them experiences a unique arc, with some lasting longer than others, and all of them eventually ending with death, after which their unique panel remains solid black. Reading becomes an incredibly stimulating exercise, as one tries to keep eighteen different storylines in the memory, while still paying enough attention to see how they seem to be influencing or reflecting each other across time, not to mention figuring out how everything fits together, and what exactly Fawkes is attempting to say about the human condition through this elaborate construction. Impressively, each story works on its own, although they obviously wouldn't be as compelling presented on their own. There are, among others, what appears to be a Sumerian priest who learns the power of language and uses it for his own gain, a shepherd who struggles to control his gay impulses, a doctor who witnesses untold suffering and death during the Black Plague, a slave who craves a freedom he'll never realize, a showgirl who luxuriates in the adoration of her audience, and a soldier who survives World War II, but never recovers from the psychological damage. Such varied experiences, spanning the whole of human history, become universal through their juxtaposition, with images and captions occasionally repeated from character to character, and struggles with religion, the randomness of life and death, and finding meaning in the vastness of existence resonating across the centuries, visual and emotional patterns forming across panels and years to bind humanity together as a whole. Fawkes manages to convey a wealth of information solely via images and internally narrated captions, forming a sort of stream of consciousness(es) that lasts for entire lifetimes. It's breathtaking from the first page to the last. 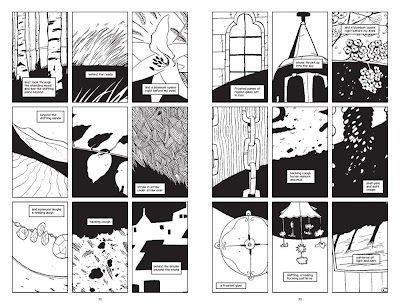 From an artistic standpoint, Fawkes' linework is effective, but occasionally a bit simplistic, struggling to get details like facial expressions and motion across. Hands are especially awkward, fingers either composed of undefined parallel lines or squared off into club-like shapes.However, moments like this are only a small, irregular distraction, the majority of the art demonstrating elegance in its simplicity, defining emotions well, capturing the essential information of moments perfectly, and attaining a minimalistic beauty that turns groups of lines into volleys of arrows or the pattern in the grain of wood, stark shapes into expressionistic displays of emotion or violence. On the whole, it's marvelously effective work, a perfect demonstration of the book's message.

In the end, that message could be viewed as a trite platitude about everyone being part of the same collective soul indicated by the title, but even if Fawkes is leaning in that direction, he has crafted a pretty effective vehicle to steer readers steadily toward that endpoint. Whatever your feelings on that new-age-y idea, it's hard not to get to the end of the book without being moved, since the sheer accumulation of lifetime moments and emotions is kind of exhausting, each page steadily driving toward the next, eighteen different lives inexorably moving forward until they can't go any farther, and yet, somehow continuing into a sort of afterlife, always questioning what it all means and how everything fits together. It's a marvelous attempt to wring some sort of meaning out of the inexplicable, to force an order and structure on the impossible mystery of life and death. If, in the final reckoning, the book isn't completely satisfying, then that can be blamed not on Fawkes, but on the universe itself.
Posted by Unknown at 9:35 PM