Manga Binge: Those kids and their newfangled roller skates 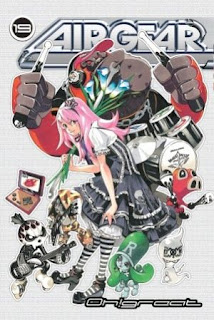 I knew next to nothing about this series going in, except that I think the artist is known for cheesecakey depictions of (often-young) women and that it was about kids fighting punks on rocket skates, or something like that. Sure enough, that's pretty much the case (when it comes to the latter, at least; the fan-service is surprisingly minimal here), although eighteen previous volumes of story have rendered whatever happens hear nearly incomprehensible, having something to do with warring teams of skaters fighting over "regalia", whatever that means, and competing in tournaments to gain mystical powers (maybe? I dunno) and/or status in the rocket skate world, I guess. The main character, Ikki, suffered some sort of betrayal and defeat from some evil, powerful twin pretty boys, and he has to overcome a crippling self-doubt, but once he does, things are back on for some crazy, high-flying action, which ends up being quite fun, at least when it happens. There's too much downtime getting to the action, but maybe this is one of those volumes that's mostly in between the exciting stuff. The last chapter or so starts a big "match" though, so the next volume will probably be wall-to-wall skating and jumping nonsense, with lots of technobabble about the skates and jargon regarding moves and techniques and such, along with plenty of convoluted interpersonal relationships that probably make sense to readers who know who the hell these people are. Whatever the case, it's all depicted in a really dynamic, exciting style, with expressive characters and lots of personality. It's easy to see why this series is popular (at least, I think it is. This is a thing, right?); it's pure shonen action, all about building teams of friends and being the best at some ridiculous activity.

But beyond the stylish action and expected story convolutions, there's some really nice artwork here, from the baroque character designs (I especially like a girl who has dozens of bobby pins scattered throughout her flowing locks and the kid who wears a giant, floppy top hat covered with safety pins, not to mention the various teams who gather to raise Ikki's spirits, such as some gorillas wearing clothes and sunglasses and a group of lock-step-marching Russians) to the wild sound effects. Check out this one, what appears to be a "Gyaaaa!" that is plated in metal armor: 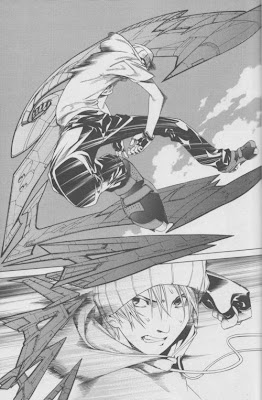 And there's one pretty amazingly expressive scene in which a despondent Ikki goes flying off a cliff, disintegrating into a maelstrom of memories: 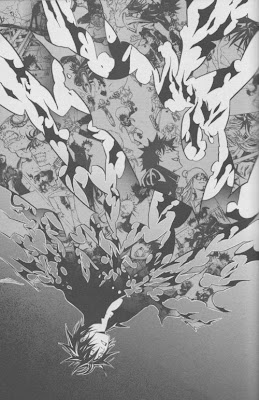 That's pretty awesome, and it would probably be even more so if I was a long-time reader familiar with whatever is going on in all those little tatters of flashback panels. That's the hand you're dealt when you pick up a random volume this late in the series though, but at least the artist knows to throw in entertaining stuff like this: 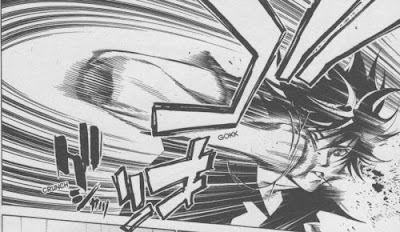 I don't know if I'm sold enough to read any earlier volumes (or later ones, for that matter), but I do recognize how effective this sort of thing can be, and that sense of anything-goes style really sells me on the artist himself. This Oh! Great guy is one to check out further (although Tenjho Tenge probably isn't the place to start...). I hope I'm not disappointed.
----- 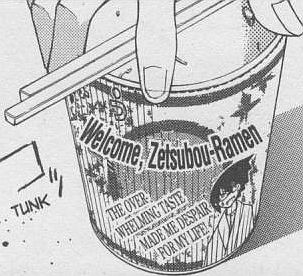