Manga Binge: These three are about as different as could be 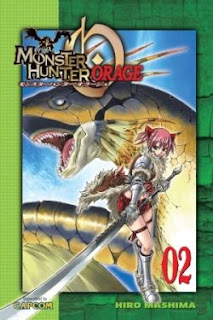 Shonen manga and video games (especially RPGs) are a pretty good match, with elements from the latter like gathering a group of heroes, leveling up, and using helpful skills or items fitting right into the former, and if the creator is talented, the results can be more than just seeming like watching somebody play through the game. Hiro Mashima, creator of Fairy Tail and Rave Master, is such an artist, exhibiting an influence from One Piece's Eiichiro Oda, but not quite going so far over the top with exaggeration or wackiness. The result is a pretty entertaining romp through what could be a generic fantasy-quest thing, taking the framework of the game, a multiplayer affair which sees small teams of characters traveling the countryside and, yes, hunting monsters in order to sell whatever can be scavenged from their corpses, and using it to tell the story of the excitably dim young Shiki as he pursues his goal of finding and defeating the ultimate dragon (read: end boss) along with a pair of female companions and other various friends and foes they meet along the way. There's a lot of talk about equipment and rules involving a guild that oversees the hunters, but the main conflict in this volume is centered around Ailee, the daughter of Shiki's late master, who, after being burned in the past, has decided she can go it alone in this harsh world, not needing anybody to help her. Will she be swayed by Shiki's bravery and friendship? If you don't know the answer to that question, you don't have much experience with shonen manga.

Sure, it's fairly standard stuff, but Mashima adds so much personality and character that readers shouldn't mind. Shiki's irrepressible attitude is fun to watch, as is the way he interacts with his friends, who treat him with either irritation or bemusement. The monster designs are probably straight out of the game, but Mashima gives them some real energy and, again, personality. It's a pretty lighthearted take on what could be dull, angsty material, even finding excuses to clothe the cast in bikinis for a key battle at sea, since fan-service is another essential aspect of shonen manga. There's a lot to like here; sometimes all it takes to rise above the generic nature of source material is a talented person to adapt it.
-----

I knew next to nothing about this series going in, and after reading this volume, I don't know if I can say I know much more, but that's the nature of trying to follow a series when starting at the seventeenth installment. I can say that it's a really stylish manga, full of ethereal touches and a spooky-yet-grounded atmosphere, a nice showcase for the art and storytelling skill of CLAMP. The plot, from what I can discern, involves a magical wish-granting shop which used to be run by a woman named Yuko, but she either died or disappeared due to events in previous volumes, and her apprentice Watanuki has taken over. He is assisted in his duties by two fancily-attired young girls, a rabbit-like creature that drinks a lot of liquor and speaks in the third person, a "pipe fox spirit" that looks like a cross between a weasel and a snake, and a friend who seems somewhat ambivalent about being Watanuki's errand boy. The main story in this volume sees Watanuki tasked with acquiring a mystical red pearl for a monster called the Joro-gumo, who previously ate his right eye (he has a magical replacement or something, and you can tell by his eyes being different colors on the cover and shaded differently on the inside). This involves traveling via dreams (since he can't physically leave the shop) to a placidly wrecked apartment and finding out what is going on with the abused girl who lives there. It's pretty creepy, mostly due to the girl's indifference to the awful physical torment she has gone through, with her even seeming to view it as her fault (a possible correlation to real-life patterns of abuse, which brings a feeling of tangible horror into the fantastical milieu). There's also some intrigue (of a sort; everything is pretty slow-paced in this manga, with emotions kept buried under layers of seeming indifference) around Watanuki and his role as the keeper of the shop, as well as an unseen love interest and various internal struggles regarding Domeki, the errand boy character. It's all pretty odd, following a rhythm that is kind of hard to key into when starting this late in the series, but effective, communicating an atmosphere of magical strangeness and mystery.

The lovely art certainly helps, defining the contours of the shop quite well but keeping to an almost minimalistic style for the backgrounds and the near-emotionless character art, which makes the flourishes of detail really stand out. Tendrils of smoke from Watanuki's fancy pipe snake across pages and throughout panel layouts; magical seals are intricately-designed patterns; curls of hair cascade from the head of the abused girl like a waterfall; the Joro-gumo, who takes the form of a beautiful woman, conveys a predatory sexuality; a Lovecraftian creature outside the walls of the shop sprouts myriad creepy eyes and attacks Watanuki with smoky tentacles as Domeki defends him with a cool weapon that Watanuki had just gifted him. It's lovely work throughout, and it's easy to see why it and its creators have gained a fan-base. There's definitely something here, a memorably spooky feel that pervades everything, a sense that anything can happen, but in a way that is very rigidly defined by rules, making for a series that is both disturbing and comforting, something that sticks in the subconscious and takes up residence. These CLAMP ladies certainly have talent.
----- 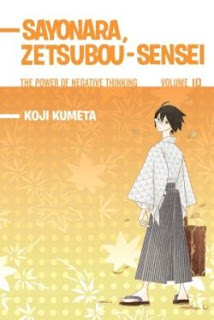 This series is one of those that, once the premise is established in the first volume or so, can be picked up at any point and followed, since each chapter is another gag-fest in which the eponymous Teacher of Despair and his students explore some cultural phenomenon or quirk of society, listing example after example of, say, ways people promote themselves or how people can profit from disaster. It's often hilarious, and even if not every joke lands (or is understood by those unfamiliar with Japanese culture), there are so many that a good percentage of them work. This volume sees discussions of three-way standoffs (in the rock/paper/scissors tradition, such as a bride, a groom, and a mother-in-law), good deeds done with the intent of receiving gratitude, the ridiculous third alternative taken when one can't decide between two options, breaking bad news via a "soft landing", and things parents don't know (stemming from a pun involving the Japanese term for wisdom teeth). As always, Koji Kumeta manages to weave each concept through a bunch of ridiculous variations, his quirky cast commenting on the topics as befits their defined personalities. There are probably an endless number of subjects Kumeta could cover, and he seems to just bum-rush each one, pouring out as many gags as he can conceive (including regular lists of examples, usually accompanied by Zetsubou-Sensei crying something like, "I'm in despair! I've lost hope in a society that profits from disaster!") until he fills the requisite number of pages. It's pretty damn enjoyable, sure to elicit laughs.

As funny as the writing is, the appealing art sells the series really well too, paring the visual information of the characters down to an almost minimalistic level. Everyone sports solid black circles for eyes and chunks of black shapes for hair, with most of the students distinguishable through their silhouettes, even though they all wear the same uniform. Background art alternates between detailed and spare, and various examples are often illustrated by tiny figures, almost like diagrams. It almost seems like Kumeta could limit things to simple text, which might be why he uses the regular page layout (which seems to be a manga-only phenomenon) in which the full figure of a character stands alongside the panels, sometimes even blocking panels from being visible and often making for an awkward reading order. Since Kumeta is mostly interested in his characters spouting verbal jokes, he seems to go back to this layout again and again, using it on nearly half of the book's pages. He does do interesting things with it on occasion, having characters sit or lean on the panels, but on the whole, it's one of those things that can be a distraction rather than an aid to enjoyment.

And then there's the other aspect of the series which always gets commented on: the constant barrage of cultural references and untranslateable jokes. Previous volumes of the series, which were published by Del Rey, featured copious (yet far from exhaustive) endnotes explaining many of these, especially the various celebrities and politicians that Kumeta mentions or the song lyrics he references in his chapter titles. This Kodansha-published volume doesn't come anywhere near that level of explanation, sticking mostly to references that directly affect the plot or characters, explaining only what is absolutely necessary to understand what is going on. It's a shame, since that on its own probably cuts the number of comprehensible jokes in half, making most of the lists of examples into gibberish. The level of care that had gone into the series previously was palpable (but maybe just not very cost-effective, since it must have been a ton of work), but while it's not quite as excellent as it once was, the series is still pretty damn hilarious, like little else on the shelves. More, please.
Posted by Unknown at 7:00 PM