Having been sent a stack of manga volumes for review, I'm going to plow through them as fast as I can and let you know what I think. Here's the first batch:

The Phoenix Wright games are tons of fun, combining point-and-click style mysteries with exciting courtroom action and throwing in plenty of wacky characters, crazy twists, and hilariously implausible murders, each case being resolved at the last minute by the put-upon hero who manages to elicit a witness-stand confession from the real culprit just in time to save his always-wrongfully-accused clients. It would seem like a no-brainer to adapt these characters to the comics form. The results aren't quite as satisfying as the games, if only because reading about Phoenix working his lawyer-y magic just isn't the same as solving the mysteries and winning the cases yourself. But judging by this volume, the manga series is a worthy attempt, managing to capture the indelible images of Phoenix jutting his finger forward and shouting "Objection!", rival prosecutor Miles Edgeworth shaking his head in amusement at the hopelessness of Phoenix's case, and the judge's gavel slamming down to announce a not-guilty verdict, and even throwing in moments like Phoenix presenting the wrong evidence by mistake and the over-the-top confessions of the real culprits.

This second volume of the current series (a previous series was published by Del Rey consisting of translations of doujinshi, or fan-made manga) works well on its own, even though it continues a story begun in the first volume. It seems that the first two chapters of that story took a while to get things started, since all the characters are quickly introduced via a summary page, and the details of the case are only just discovered here, allowing the real courtroom action to begin. It's a goofy mystery about a murdered rich man whose brother was obsessed with spiders, with said brother being the only suspect, but certain strange details not quite adding up. Phoenix triumphs, of course, determining the true guilt at the last moment. The second half of the book is taken up with a single standalone story about the murder of a theme park performer who was trapped in his bulky costume, making for "the world's smallest locked room mystery". It's not quite as satisfying of a case, requiring a leap in logic that doesn't seem to follow directly from the evidence at hand, making it less like a case from the game and more like a story about an amazingly intuitive lawyer, if that makes any sense.

All in all, it's a pretty fun manga, if not as good as its source material. One niggling complaint would be the depiction of Phoenix himself, who seems just slightly off-model. His hair is especially troubling, looking less like the spiky, swept-back strands of the game and more like pieces of pointy plastic bolted onto the sides of his head. It's not a deal-breaker, but it's a sign that this isn't quite on the level of the game. If you can get past that and enjoy it for what it is though, you'll have a good time. Take that!
----- 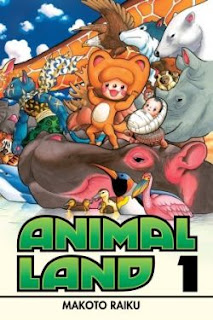 This is one strange series, from Mokoto Raiku, the creator of Zatch Bell!!, which I've never been able to figure out either. The concept here sees a human baby discarded by his mother, Moses-style, found by a tanuki, and adopted to be raised in an animal-filled wilderness. That's all well and good, the beginning of a saga of cute animal/child antics, but Raiku pitches everything at an operatic level of emotional intensity, characters constantly screaming in agony or joy, tears flowing from eyes like torrential rivers, everyone seemingly moments away from complete nervous breakdowns, not to mention bloody death from ever-present predators. It's an odd tone, not really suited to the child audience that the cute animal designs indicate.

As for those designs, yes, that teddy-bear-ish figure on the cover is a tanuki, but it doesn't really resemble either real-life Japanese "raccoon dogs" or their usual cartoon depictions. Raiku treats them more like people in animal costumes, complete with moustaches and breasts for the adult tanukis; it's bizarre, and rather off-putting, but maybe it's an attempt at a more cartoonish version of reality, one that is heightened in its emotion, drama, and even violence. Later, a wildcat joins the cast, but he wears clothes, a patterned shirt, shorts, and scarf, standing out from the other "naked" wildcats that he battles, but with no other characters treating it as if it's at all odd. The scale is all out of whack too; the wildcat towers over the other animals as if it is ten feet tall. Who knows what the intent is here, but it's certainly unique.

The story itself looks like it will follow the adventures of the child and his adopted tanuki tribe as they make their way in the violent animal world, with the kid effecting big changes on the ecosystem due to his ability to talk to all the animals, who were previously incapable of inter-species communication. This makes for a startling change from the usual Japanese depiction of man at odds with the placidity of nature; instead, this story seems to be about man bringing order and harmony to the harsh, violent animal world. Again, that's unique, but it doesn't really seem to make sense, unless it's all supposed to be a symbol of childlike innocence breaking down interpersonal barriers and calming violent natures.

However it's supposed to be interpreted, it's a pretty rousing adventure, with emotions dialed up to eleven, most notably in a scene in which the entire tanuki village works together to save the sick child by piling themselves around him in an igloo shape to produce warmth, all screaming together in support of the inspiring adoptive mother tanuki. It's a crazy scene that's completely free of ironic distance, bare emotion laid onto the page, and it's not alone; the whole volume is full of similar moments, including a brutal fight between the clothes-wearing wildcat and several other cats who are trying to attack the tanuki village, with the baby shouting encouragement from the sidelines. This manga seems to be trying its hardest to make readers feel, dammit, to get invested in its weird, cartoony animals and their desperate fight for survival. Even cynics might experience some stirring of the heartstrings, but a mind distracted by all the oddities that fill the rest of the story makes for a confused reading, and that's probably not the actual intent. Still, it's not like much else in the comics world, so fans of Japanese oddities may want to check it out. Everyone else, be forewarned: you might not be ready for this.
----- 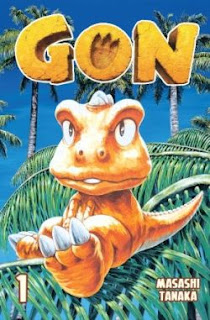 Gon has been one of the perennial manga titles to be published in the West, possibly the first Japanese comic I can remember seeing, and there's a reason for that: it's incredibly fun, easy to read, and gorgeously illustrated, simple in its disconnected tales of a little dinosaur who beats up on the tougher members of the animal kingdom with ease, yet exquisitely expressive in the emotions it manages to lend to animals' faces and hilarious in the havoc wreaked on anything and everything that gets in Gon's way. Plus, being wordless, it's easy to translate, so there's that.

Even if there were words, language wouldn't be much of a barrier here, since the action is so wonderfully conveyed that there is no doubt as to exactly what is going on. Masashi Tanaka's hyper-detailed art sports incredibly dense cross-hatching that gives the naturalistic setting and realistic animals a texture that seems tactile, as if the reader is right there among the forests, mountaintops, and rivers in the stories. The sense of movement is amazingly palpable too, such that even a tiny dinosaur headbutting a huge bear and sending it crashing through a series of trees is somehow believable through the sheer sense of speed and force that the art conveys. It's not all action though; the intensity is leavened through Tanaka's hilariously exaggerated facial expressions, including the evil eye that Gon gives anyone who crosses him and the panicked disbelief on the face of a beaver whose pond is usurped by grand reptilian dam-building plans. Every page is just gorgeous, full of life and energy; there's not really anything else like it.

That said, the one thing that inhibits this edition is the price; at $10.99 for a slim single volume, it would be a better deal to seek out the CMX editions of a few years ago, or even the Paradox Press version of the series which came out back in the 90s. For a book that has seen previous release at a lower price, this version just seems prohibitively costly. But do seek the book out if you haven't read it previously; it's definitely something that everybody should see, just to experience some lovely art and the possibilities of what can be done with a simple, effective concept and pure wordless storytelling.
Posted by Unknown at 7:00 PM