Zahra's Paradise: The obvious thing to say would be that it's anything but 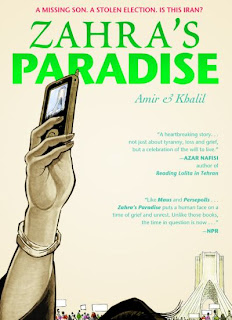 Journalistic comics seem to be on the rise in recent years, but as important and essential as that movement is, what's possibly more interesting is the offshoot sub-genre of current-events-influenced fictional comics, books which draw inspiration from real-life events, but aren't beholden to the often-unsatisfying open-endedness of reality. That may be a glib way of looking at things, but reducing the messiness and complexity of non-fiction to something that can be communicated simply and effectively through characters that don't exist outside of a book's pages is a commendably challenging task in itself, and when done right, it can inform and educate, leading readers to seek out more information, and motivating them to do so by weaving a moving story and getting them emotionally invested through the creation of characters that could well be real people, even if they don't live beyond the confines of the story.

That's what "Amir and Khalil", the pseudonymous creators of this book, have done, and the results are no less than enthralling and moving, placing readers on the ground during the chaos in Iran following the presidential election of 2009, and in the hearts of a mother and son searching desperately for their missing son/brother, who disappeared in the middle of the protests. Their search leads them all over the Iranian capital of Tehran, from the jails and the courts to the hospitals and morgues, all to no avail. But while their efforts are fruitless, readers are taken on a tour of modern Iran, along with commentary on the religious regime and people's varied reactions to it, demonstrations of the many abuses of power being inflicted on the people, and a sense of steadfast refusal to bow to oppression. If there's any message that stands out from the torrent of information and emotion that fills this book, it's that the people and culture of Iran are thriving, even under the smothering cloud of the old men in power. Characters constantly quote revered poets and celebrate their beloved heritage, finding strength in their love of their homeland and their fellow people, demonstrating love and forgiveness even while fighting what seems like a losing battle against the forces of evil. It's powerful stuff, full of deserved feeling, both exciting as a voice for the people of Iran and educational to those of us looking in from the outside. 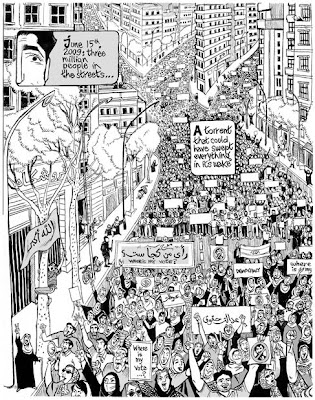 On the art side, the book looks fantastic, sporting cartooning that places its characters right on the line between generality and specificity. Hassan, our narrator and tour guide, is given the most simplified features, usually drawn in profile and resembling an Osamu Tezuka character, but others, from the belligerent copy shop owner to the hirsute prison guards, seem as real-life as they come, and everyone looks Iranian, unmistakably garbed and comported as citizens of this place of monumental change. That setting comes to life as well, from the buildings covered with images of the Ayatollah, keeping watch on citizens like Big Brother, to the small spots of solace in bedrooms and courtyards, to the solemn sight of lines and lines of newly-dug graves. The use of the comics format is excellent as well, keeping the eye moving along from panel to panel, taking in the events and the people they affect, but occasionally breaking out into expansive cityscapes and expressive layouts that turn a search through morgue records into a morbid chess game, a bureaucratic paper trail into an Escher-esque maze, or the very powers that control Iran into a horrific machine that chews up and spits out its people with unending regularity. It's gorgeous stuff, full of life, and effectively demonstrative of the anger that fuels the oppressed populace. 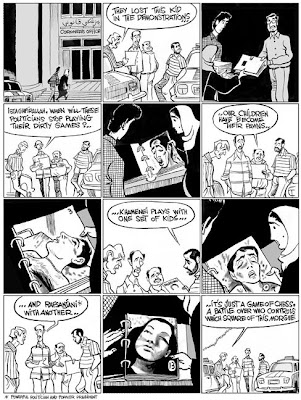 Beyond the compelling, ripped-from-the-headlines story and the lovely art, there's plenty else to pay attention to here, from the symbolic names of the characters on down. The paradise of the title is the name of the massive graveyard on the outskirts of Tehran, named after the prophet Muhammad's daughter. The mother searching for her son is also named Zahra, giving the story a symbolism about the lost "purity, dignity, generosity, and grace" that the prophet's daughter represents. What's more, the missing son is named Mehdi, which is another name for the Mahdi, the messianic Hidden Imam of Islam, demonstrating how the religious figures clinging to power are fighting against their people's very hopes and dreams in doing so. That's just one fascinating bit of cultural commentary, something even an outsider can grasp out of an intimate portrayal of a land and its people, something that is full of meaning for Iranians but also welcoming to those looking in from elsewhere.

While the subtext is interesting, the absolutely vital depiction of Iran is where the book truly comes to life. This is a place where even though people may be hanged in the street (via crane, a morbidly true detail) for the crime of homosexuality, woman struggle to demonstrate what little femininity and intelligence they are allowed,  taxi drivers take what small vengeance they can for their country's mistreatment by world powers, informational and organizational campaigns are waged in copy shops and on the internet, millions-strong throngs take to the streets when an election is stolen from them, people use what influence and skills they have to help each other find some measure of solace in the face of impossibility, and the mothers of the children lost in the continuing struggle pour out such evocative lamentations that one can't help but be moved. It's a beautiful, inspiring portrait of humanity, and one that is essential in understanding a vital part of our world today.
Posted by Unknown at 9:41 PM