Drinking at the Movies: This book could stand to get me more tipsy

Drinking at the Movies
By Julia Wertz 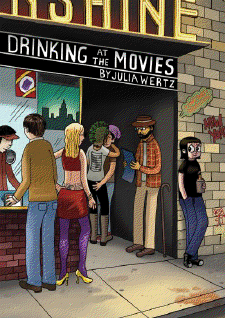 Julia Wertz is a charismatic personality, energetic, funny, profane, witty, and good at telling stories about the mundanities of her life, making them interesting and enjoyable even while pointing out that they are kind of obnoxious and self-centered. Unfortunately, she can’t draw very well at all, which drags her autobiographical comics down to the rudimentary level of quality typical of the minicomic/webcomic “isn’t my life interesting?” genre, managing to stand out in that crowd only through sheer force of personality. But that’s apparently meant to be part of the appeal, a lo-fi look at the struggles of early adulthood, tinged with plenty of humor and self-deprecation. While Wertz’s webcomic, The Fart Party, is autobiographical, this book has more of a specific focus, telling the story of her move from San Francisco to New York and the subsequent struggles with employment, living arrangements, relationships, and drunkenness as she learned to survive in the big city. You’ll laugh, you’ll cry, you’ll be disgusted and appalled by Wertz’s frank descriptions of bodily functions and sailor-like use of profanity. That seems to be the intent, anyway.

While this standalone volume might have been a chance for Wertz to stretch a bit, using longer-form storytelling to detail a bigger swath of her life than what happened last week, she still seems to be stuck in webcomic mode, splitting everything up into one- or two-page stories, detailing various moments, and occasionally stretching out into longer tales, but rarely utilizing a structure more complex than “and then this happened.” That’s the nature of a life story, of course, and nobody’s story fits into a neat narrative arc, but Wertz seems to be actively resisting any sort of plot, choosing to string incidents together without an eye for structure, making for a repetitive bunch of bits in which she complains about her jobs, has problems with her crappy apartments, and gets drunk with friends. There does seem to be a bit of slight growth over the course of the volume, but not really enough to justify why Wertz felt that this portion of her life required being called out and detailed. The most interesting things happen in the margins, such as Wertz’s occasional worries about her recovering drug-addict brother who she left behind in San Francisco, prompting guilt when he relapses. She occasionally contemplates the political situation in the country but doesn’t take any action, making such scenes seem shoehorned in to show that she has some awareness of the world outside herself. As enjoyable
as spending time with Wertz must be, it’s hard to see why one would want to spend this time with her, unless the reader is a friend of hers, or feels like they want to be one.

The art certainly doesn’t help make things any more compelling, acting as a very basic way to detail what happened. Wertz’s characters have very little variation, stiff paper dolls perched in similar poses from page to page, the same expressions frozen on their face. Variations in facial features manage to demonstrate emotion well enough, but if one examines them, the realization that nearly every person has eyes that combine what looks like a numeral 6 with a big “loop” with a squiggle for an eyebrow on the other eye gets distracting, prompting the search for some difference. Furrowed brows (single diagonal lines over the eyes) and bulging eyeballs do show up here and there, but it’s just one example of the limits of Wertz’s artistic skill. Her noodle-like limbs, solid black hair, and overly simple clothing are others; there’s not much to dazzle the eye at all, except possibly the occasional anthropomorphic objects that suggest where Wertz could shine if she ever ventures outside the realm of autobiography.

It’s not fair to judge the book by what the reader seems to think it should be rather than what it is, but whether Wertz is going for a redemptive story about maturity or not, a string of amusing incidents held together by amateurish artwork doesn’t really make for a satisfying read. Wertz does seem to attempt a sort of arc, although it jumps straight to her having cleaned up her act and grown up a little in the final pages, with little leading up to it in the parade of funny incidents in the rest of the book. It makes for a conclusion, but not one that is earned, which is unfortunate. Wertz has enough personality to make a story like this entertaining, but not enough skill at crafting that story to make it flow like it should, and that’s a shame, seeming like a missed opportunity. As it is, it’s a fun couple of years to watch in Wertz’s life, and little more. Back to the party of farts.
Posted by Unknown at 12:00 PM