Swag report: I'm not sure why I got this

I don't usually post the PR-type information, but the goofy nature of this oddball request, combined with the opportunity for something free that I don't really need or want, was, well, not exactly irresistible, but at least worth a "what the hell, why not".  So, when given the opportunity to plug The Guardian Project, I sort of half-jumped at the chance.

And what is The Guardian Project?  Well, it's Stan Lee's latest "superhero franchise", and it's affiliated with the National Hockey League, with a superhero representing each team, although it's not certain whether they will battle villains (perhaps from the Canadian league, or the NFL) or each other, or even do much superheroing at all beyond appearing on posters.  The press releases make no mention of comics or animation, although the characters are all designed by Neal Adams.  At this point, the main intrigue involves the order in which each hero will be revealed, with fans (of the teams, presumably, since nobody knows anything about these characters) voting concurrent with matchups between teams throughout the month of January 2011.  I guess that's kind of fun?  For somebody?

So, what prompted me to so blatantly sell out?  None other than this signed Neal Adams poster, an image of a bunch of heroic figures, somehow obscured mysteriously by shadows even with myriad light sources sprinkled throughout their midst: 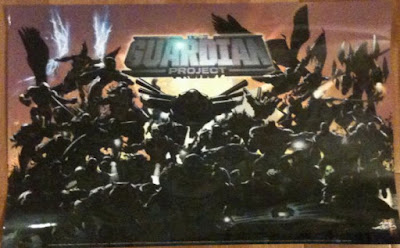 Perhaps I should have given this "whoring myself out" concept some more consideration...
Posted by Unknown at 2:36 PM