The Unsinkable Walker Bean: He certainly is 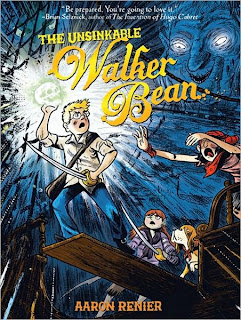 If one were to judge by the cover, this book would appear to be a heroic adventure starring a brave boy on the high seas, but the interior tells a different story, at least regarding the eponymous young man’s bravery. He ends up spending more time shedding tears (sometimes of sadness, but usually of fright) than swashbuckling, which might be a bit offputting to those expecting the typical fearless tot. However, it ends up being a canny move on creator Aaron Renier’s part, grounding young Walker Bean as a normal kid caught up in a frightening world of pirates and magic, just trying to save his grandfather’s life and survive multiple shipwrecks and attempted executions. The similarly-aged companions that he picks up have similarly flowing tear ducts as well, with the end result seeming more like the exaggerated emotions of Japanese manga than a deficit in guts among the heroes. And while the adult characters aren’t as weepy, they are often demonstrably less competent and more easily manipulated, so the combination of openness and intelligence that the main characters show makes them the real center of the story.

As for that story, it’s a pretty good one, seeing young Walker tasked with returning a cursed skull to a pair of monstrous “merwitches” who dwell in the ocean’s depths, a quest that forces him to jump in well over his head, bouncing back and forth between his naval captain father and a ship of pirates, both of whom fall under the sway of a mysterious, possibly inhuman doctor who wants to use them and the skull for his own nefarious ends. It’s a fast-moving tale with lots of twists and turns, and Walker develops nicely as a character throughout, making the best of his circumstances and using his strengths as an inventor (coming up with ideas like retractable wheels on a ship for traveling on land) to find solutions to his problems when his small stature makes him seem powerless. There’s also some of the standard “power of friendship” stuff, but it’s not very sappy; Walker allies with two young members of the pirate crew, but there’s a lot of mutual distrust, and some of the actions he takes in pursuit of his noble goal end up hurting them and betraying their trust. It’s a surprisingly deep look at realistic human relationships, especially those among the volatile emotions of youth.

While the story is a good one, much of the fun to be had comes from Renier’s detailed environments, which are beautifully depicted in a style similar to European artists like Joann Sfar and Lewis Trondheim, even down to the album-size dimensions. It’s a quirky world, full of distinct characters and crazy ideas, and Renier packs it full of detail, often using double-page spreads to present a scene like a battle between ships that features inset panels corresponding with cannon fire, or chase through the crowded market in a seaside town that sees Walker and his friend Shiv weave in and out of people in a path across the pages that clearly communicates what is happening even though there are multiple images of them scattered throughout the scene.

Special recognition should also be given to colorist Alec Longstreth, who adds life to the images through gorgeous hues that perfectly define the oceanic environments, from the blues of the ocean and the browns of ship timbers, to the sickly green pallor of Walker’s cursed grandfather, to the eerie green glow of the evil skull and the harsh red of its word balloons when it tries to taunt Walker into doing the wrong thing. Even scenes that take place in the dark manage to use color to make the images clear, using dark greens and blues to define everything without overwhelming the linework.

It’s a beautiful book, full of energy and life, an extensive world to explore and well-defined characters to inhabit it. And while it comes to a satisfying conclusion, the closing pages promise a sequel, which is great news, since there’s plenty more here that Renier can explore, more adventures to have and inventions to construct, more crazy personalities to meet and monsters to fight. It’s shaping up to be an excellent series, and Renier definitely has the talent to keep it going for a long time to come.
Posted by Unknown at 12:00 PM