Set to Sea: The poetry of a life of violence

Webcomics links: Blogger and sometimes comics writer Sean T. Collins and Matt Weigle are doing a webcomic called Destructor, which is apparently a colorized (and expanded?) version of a previous story of theirs.  Looks like one to follow.

James Stokoe has the still-unfinished beginning of what was originally intended to be a bonus story in an Orc Stain collection before it got out of control.  What's there is pretty awesome so far.


Set to Sea
By Drew Weing 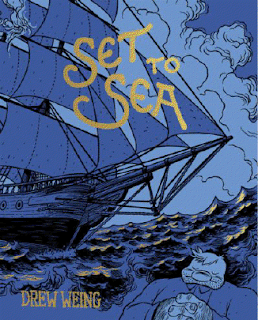 These days, even artsy publishers like Fantagraphics are doing print versions of webcomics; it’s becoming obvious where the future of the medium lies. The impeccable taste for which they are known is still in effect though; Drew Weing’s seafaring character piece fits right in to their stable of quality comics. The book (and the webcomic before it) presents one page-size panel at a time, following a hulking mountain of a man who longs for the sea, but as a subject for his poetry rather than a locale for adventure and exploration. He doesn’t get a choice in the matter though; he gets shanghaied early on and ends up as a deckhand onboard a merchant vessel, uncertain of his skills or his place on the ship, but eventually working his way up the ladder of command and finding contentment in the life about which he had dreamed. It’s pretty simple, straightforward stuff, seeing a man out of place in his life finding acceptance and purpose and even discovering that the artistic expression that he wanted to realize could only come from experience. 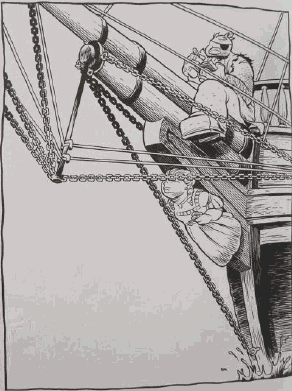 This is all rather nice, but what makes the story work is Weing’s excellent art, which uses a perfectly steady, confident line to bring the characters to life, setting them against beautifully detailed backgrounds that ground their exaggeratedly cartoony faces and physiques in a realistic world, then drop out at moments of high emotion or excitement for maximum impact. The unnamed protagonist is a wonder of expression, huge and awkward in most situations, with a smallish head standing atop a gigantic body, with big, hairy, three-fingered hands dwarfing anything he holds. It’s not until he spends years at sea that he finally grows into the role which he seemed born to play, eventually seeming at home as a larger-than-life seaman rather than an awkward, clumsy social misfit. 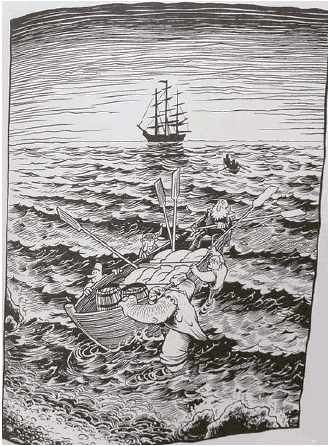 The book itself is a nicely-designed object, measuring in at a small five-by-nine inches, which ends up being the perfect size for the detail-packed panels, enough space to define the world without making it seem like an overwhelming display of stuff. Weing even manages a bit of subtle reader identification with his main character; holding the little book in ones hands makes one identify with the would-be poet as he does the same with his volume of disappointing poetry. 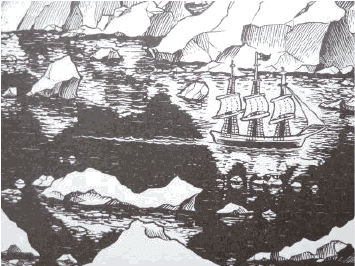 Overall, the experience of joining this large fellow on his life’s journey is a delight, if a fairly short one. It’s a small book in length as well as size, able to be read in a single sitting, but it’s good enough that it invites multiple journeys through its pages, allowing explorers to marvel at the fluid movement of the characters, the chaos of an inter-ship battle, the choppy waves and calm harbors, the joys of a life lived and savored.
Posted by Unknown at 12:00 PM