Pang, the Wandering Shaolin Monk: That title refers to what I feel while waiting for the next volume

Elsewhere: I contributed to a "Best Graphic Novels of 2010" list for Flashlight Worthy Books, spotlighting The Unsinkable Walker Bean by Aaron Renier, which isn't actually my very favorite book of the year (that's still to be determined), but is definitely one that I think could stand to get more attention.  Other contributors include Jog, David Welsh, Tucker Stone, and Brigid Alverson, so check that list out; it's good stuff.


Pang, the Wandering Shaolin Monk, volume 1: Refuge of the Heart
By Ben Costa 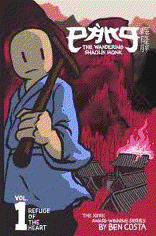 In this exciting age of comics ubiquity, you never know what you’re going to find, whether you’re looking at literary comics, imports from foreign countries, young adult comics, or, in probably the category most choked with volume, webcomics. A huge wealth of quality comics can be found online, and some of the best of them even get a chance to make it to print, sometimes through the recognition of organizations like the Xeric Foundation. Ben Costa is one such recipient of a Xeric grant, which allowed him to bring out a print version of his webcomic Pang, the Wandering Shaolin Monk, and the world is better for having it available. Costa’s comic is a fascinating bit of historical fiction regarding the Shaolin Temple and its role in the takeover of the southern regions of China by the Qing Dynasty in the 17th century. If that sounds like a dry bit of textbook learning, the comic is anything but, following the impressionable, sheltered young monk of the title as he stumbles into events he barely understands, trying to make his way in the world after events lead to him leaving his temple, the only home he has ever known. Costa fills the book with humor and personality, movement and color, activity and life, making sure to fill in the edges of the panels with realistic detail and informative footnotes, but centering on Pang, giving him a relatable voice (with modern inflections and slang) and emotions, his open expression conveying the fear, excitability, and meditative calm that he experiences. 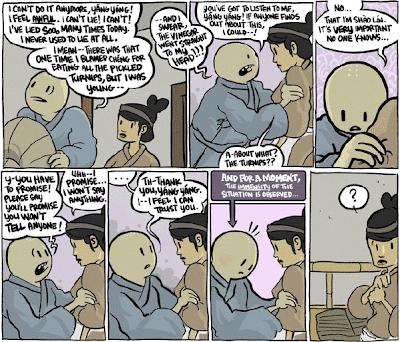 In fact, the depiction of the main character is one of the interesting things that Costa does; unlike the other characters, who sport a variety of facial shapes and distinctive features, Pang is presented as a sort of blank slate, his round head and dot eyes seeming only slightly more detailed than a smiley face. It may be an attempt to allow the reader to project themselves onto the character, imagining what it would be like if they were playing the role, but he still ends up coming off as expressive and relatable, especially when he’s flustered or determined. And Costa fills everything in around him so well that he soon seems like just another denizen of this colorful world. 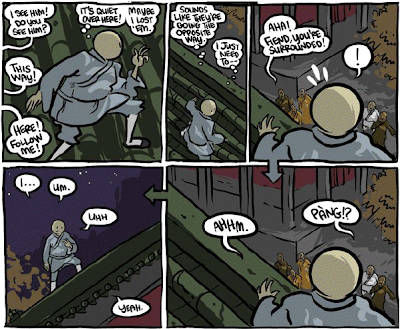 Costa’s innovative tendencies don’t stop with his main character either; he is constantly mixing things up and going in unexpected directions artistically, using Chris Ware-style captions to begin or end spoken phrases or to semi-comedically comment on the action of the panels, and laying the panels themselves out in a different order than the natural reading progression, directing readers all over the page with arrows (and sometimes making things more confusing than they need to be). He uses thick, definitive brushstrokes surrounded with gorgeous colors that really make the environments pop, but these clean lines get messy and less defined in action scenes, signifying the rush of adrenaline and emotion that sets them apart from more placid domestic moments. It’s a pretty bold statement of artistic expression, never sitting still, always shifting and moving, capturing a living history. 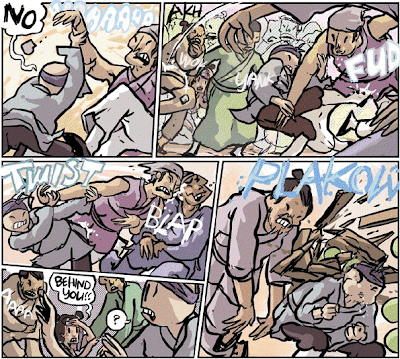 It’s a pretty impressive achievement, obviously well-researched, but still exciting and full of character. While the book starts off with Pang entering a busy town and learning about the life of the people, much of the volume is taken up with a flashback detailing what happened to make him leave the temple, allowing Costa to spend page after page on huge battle scenes and big action. Later, the fighting catches up with our hero, and he has an extended fight scene while wearing a giant wooden collar as a form of shackles; along with historical scene-setting and deft characterization, Costa has a flair for action choreography as well, which is a must when depicting martial arts. It’s easy to see why he was chosen for a grant; this is one talented cartoonist, an artist with a vision that seems to burst out of his pen and onto the page (or leap from his graphics software onto computer screens). With this volume only signaling the start of a lengthy epic, it should be amazing to watch where he goes next.
Posted by Unknown at 12:00 PM