Grinding the AX: The shift from adult to kiddie is whiplash-inducing

This is the third part of a continuous blog through the first (and hopefully not the last, no sir) volume of the AX anthology:

"The Brilliant Ones"
By Namie Fujieda

In a book like this, it's kind of stating the obvious to say a story is weird, but this one is odd in a different sort of way, in tone as well as subject matter.  It seems to be a parody/satire of school-set manga full of idealistic teachers and friendly students.  The teacher exhorts his students to "shine" and hold on to their dreams, but it's a pointless encouragement, a "do your best" with no basis in reality.  This is brought home (sort of) when a student disagrees with the teacher, stating that he'll never have a chance to shine, since he has a terminal illness, and then promptly explodes into thousands of maggots (in a non-gory fashion, as if he simply transformed into a bunch of little blobs).  The teacher won't give up on him though, and he gets the students to collect as many of the worms as they can in a box, but after doing so, the box gets shelved in the back of the class and forgotten, until one day, the narrator of the story, some girl, looks inside and sees the worms all eating each other and getting bigger, then transforming into some sort of moth creature and flying out the window, giving the teacher the chance to claim that the dead kid got his chance to shine after all.  The end. 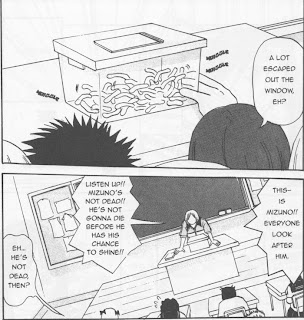 So, what the hell, am I right?  I can't say for sure, but this all seems to be a spoof of that sort of "you can do it!" cheerleading that adults give kids that's little more than lip service.  The teacher here is a perfect example, all strenuous statements with no substance, more interested in possibility than actuality.  He wants statistics to prove his success, not caring about the kids once they leave his class, so even with a lost cause like the dead kid, he's trying to find some way to prove that he's right.  But once the kids he supposedly wants to succeed are out of his sight, he forgets about them, as does everyone else, unless they do something newsworthy that allows him to once again claim success.  Is that all a stretch?  Probably, but there's still something in the weird mood of the story, the pointless excitement of the teacher and the blase attitude of the kids when such shocking things happen to their classmate.  It's gotta be representative of something, right?  Maybe it's just a statement about the vapidity of school manga, but it's still really arresting and unique.

"The Tortoise and the Hare"
By Mitsuhiko Yoshida

This story marks something of a left turn for the volume, a shift to more all-ages fare from the wacky adult hijinx.  It's a retelling of the classic fable, or actually a sequel, starring the grandsons of the original racers.  The rabbit is sure he won't get lazy and make the same mistakes, so the tortoise comes up with a way to outwit his competitor and win anyway.  It's an odd lesson for the kids (who probably aren't reading this anyway), that lesser-talented people need to resort to trickery to get ahead, but it's still applicable.  Plus, Yoshida's art is lovely and lively, full of nicely anthropomorphosized animals and rich natural backgrounds.  It's an interesting break from the format of the volume, but an understandable one given the talent on display. 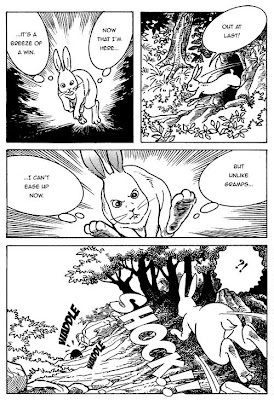 "The Twin Adults"
By Kotobuki Shiriagari

And it's back to strange goofiness, with two entries in what appears to be a series of minimalistic stories starring two naked bald guys who sit in a bare room/landscape and fuck with each other.  In the first one, one of them sculpts an idol and decides that it's a god for him to worship, leading to pointless conflict between the two of them.  In the other, one contemplates the nature of existence, wondering if he or anything around him actually exists, allowing the other to play disgusting jokes on him regarding the nature of reality.  It's all quite silly, but funny nonetheless, and the art is interesting, reduced to basic calligraphic brushstrokes and a little bit of greytone shading.  I would love to read more of this series; it's pretty nuts. 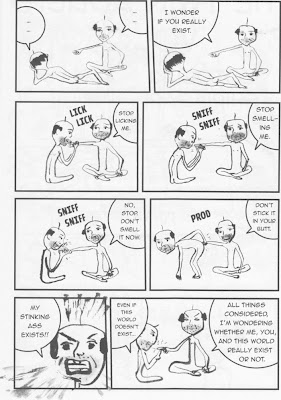 Two more minimalist stories, although they're more gentle and poetic (hence the title), starring a father who teaches elliptical lessons to his son, with a haiku featured in each.  They seem nice, and cute, but there's not much to them.  As a four-page interlude in each issue of a magazine, it might be a nice series, or it might just be forgettable.  Certainly not terrible though.

This is another kiddie/all-ages story, but a beautifully realized one, following a young boy who causes an infestation of huge mushrooms to engulf his entire medieval-ish town, but in a non-threatening way, more of a bit of fantastical wonder than anything scary.  There might be an intended bit of symbolism of some sort, or it could just be a flight of fancy, but it's a beautiful story either way, full of densely-detailed pastoral imagery and a rich world of cobblestones, gears, and machinery, all ready to be consumed by fungi.  I don't know if this is part of a longer series, but if it is, I would love to read more. 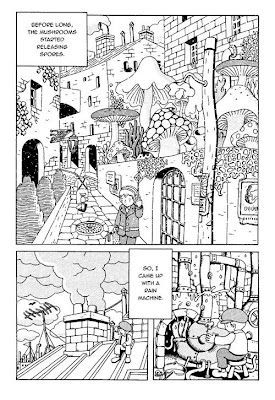 "Home Drama: The Sugawaras"
By Einosuke

And we're back to the weirdness, with a scene of a family eating dinner, the patriarch looking on ecstatically as his feral children rapidly consume noodles like monstrous beasts.  It's hilarious and horrifying all at once, with close up, fish-eye views of the father's laughing face as his family ignores his conversation and messily wolfs down everything in sight.  The art is full of stipply detail, but almost completely background-free, drawing the focus directly on the man's face as he feigns pride to cover up his horror at where he life has led.  It's a striking portrait of modern life, beautiful in its ugliness. 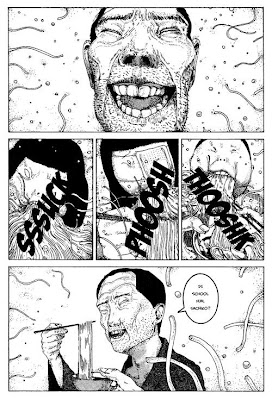 And that seems to be it for this installment; more to come before too long, one hopes.
Posted by Unknown at 8:54 PM